Athlete & EP Tatyana McFadden on spotlighting athtletes before disabilities, pay equity & the future of the Games 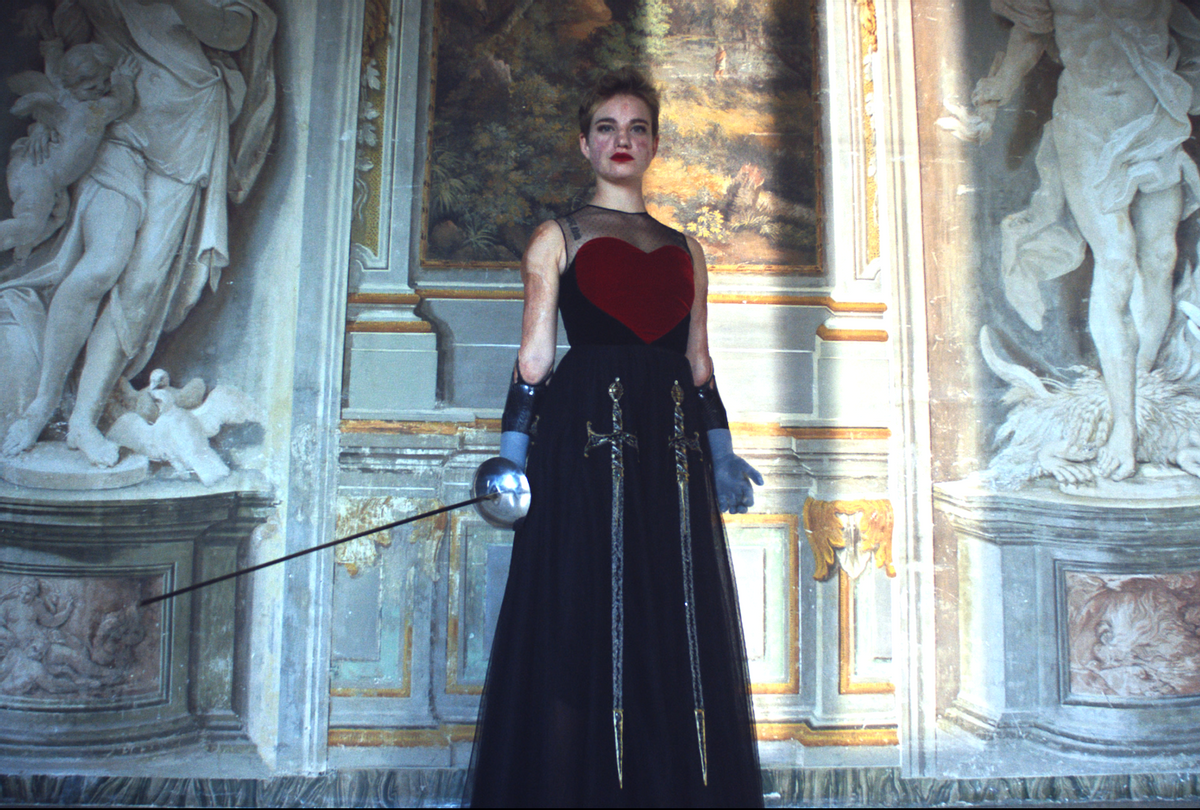 "Rising Phoenix," which is now streaming on Netflix, traces the history of the Paralympic Games from its origin as a rehabilitation activity for disabled British World War II veterans, and is now a global event. This retrospective is punctuated by absolutely gorgeous footage and interviews from the more recent games, as well as languid, slow-motion sports shots of featured athletes like Italian wheelchair fencer Bebe Vio and American archer, Matt Stuzman, who uses his foot to hold his bow.

Directed by Ian Bonhôte and Peter Ettedgui, "Rising Phoenix" also focuses on the career of Tatyana McFadden, one of the Paralympics' most decorated athletes. She is a wheelchair sprinter who has won 17 medals, while also driving change for other disabled athletes in America. McFadden, who executive produced the documentary, helped spearhead the Fitness and Athletics Equity for Students with Disabilities Act, which gives students with disabilities equal opportunities to participate in school athletics programs. She also was a vocal advocate for equal pay among Olympic and Paralympic athletes.

McFadden spoke with Salon about how athletes with disabilities are portrayed in film, erasing stigma through the visual elegance of "Rising Phoenix," and why now was the best time for this documentary to debut.

Tell me about the inspiration behind the title — obviously it was Bebe Vio's nickname, but what were you wanting to signal to viewers?

Yeah, it's such a powerful name. It's very catchy, for one, and then it is the nickname for one of the athletes. There is this idea that you burn, you die, you burn again and then you live. So, I think when you're looking at all these stories, all these athletes go through a struggle in their life, a very significant struggle.

It may seem like it's a burning point, a dying point, but then they relive through sports. Sports is the reason. So, I think that's why the name was just awesome. It kind of resonated, you know, with all the athletes — not just the one because of her nickname.

Speaking of power, I was really struck by some of the strong visuals presented in the film — swimmer Ellie Cole's gorgeous slow motion scenes underwater, your scene in the fields, the cheetah that is filmed running. What were you hoping to accomplish aesthetically with these images?

It's beautiful. You want to find elegance within the storyline, and Ian and Peter, they also did the documentary "McQueen" on Netflix. They have a certain style when it comes to elegance. You know, you're right — when you are looking underwater, you think "Oh, that's just beautiful." Or the cheetah, that brings a kind of funny toughness and coolness, but also there is the elegance of when the cheetah is running and the runner has cheetah blades — those are his running legs — on.

And then there's myself in the cornfields. Motion picture can speak a lot of words, right? So, I think that was the purpose of the film directors. It's really classy and it grabs the eye.

Well, and I don't feel like we necessarily always see Paralympic athletes depicted in that way. Do you agree?

It's funny, when the directors went, "Oh, we want you to wear something really beautiful for this and we have an idea of how we want to capture it — we're doing it with all the athletes," and  was like, "Why?"

And the directors were like, "Well, we want to bring a sense of elegance to the film." You know, we could do kind of the whole "rah rah" and the toughness of it, but there's something really beautiful about every single person in the film. And we want the world to see that people with disabilities are beautiful.

When we first started filming, I was like, "Hey, we have a lot of stigmas to break here . . . to push the boundaries of the Paralympic sports." I knew the athletes would need to be talked about in a certain way and interviewed in a certain way, so [Bonhôte and Ettedgui] were very open to honest discussions and they're great. They listened and understood completely.

To that end, there are two concepts that sort of run parallel in this series. Bebe Vio talks about wanting to know people's stories because they are illuminating, but then you have Jonnie Peacock who said that in preparation for the Paralympics it was refreshing to focus on sport, not story. How did you make sure you balanced those two desires in this documentary?

Exactly. So, every athlete has a different viewpoint, of course, but I think in this film you saw the sports side through filming — camera angles, their muscles, the specific designs and showing highlights of the game.

But when you had the athletes talk, they were able to express their stories about how sports allowed them to become the person that they are. It's important because we want to be seen as an athlete first, right? Yes, I have a disability and I am very proud of that, but oftentimes I'm going through the airport and people will automatically see my disability first and they will say, "Oh, well, you're very inspiring for being out today." I think this film allows people to see the athlete first.

Of course the incredible stories and journeys are important as well, so I think this film portrayed that and I think the directors did a great job respecting everyone's requests and they did a beautiful job portraying it.

You definitely want to highlight the sports aspect of it though, I mean, I don't have the flexibility to do bow and arrow. Matt Stutzman does it with his feet and he has a Guinness World Record for doing it for three football fields' length. So you know, an able-bodied person could not do that. And every athlete had to figure out how they were going to get back to playing their sport, how to shoot a bow with your feet and teeth, how to run with a prosthetic leg, Ellie [Cole] had to learn how to swim again.

It's true. It's 100% true. Everyone was really quite different, and I think that's the coolest thing. Because when you talk about diversity today and you talk about pushing for equality, that's everything that we are talking about in this film. The Paralympics pretty much highlights all of that. I've always believed that life isn't about what you don't have, it's about what you do with the gifts you are given.

I think once people watch this, they will be more drawn to the Paralympics because they don't have to sit there and compare themselves to others. I think the Paralympics already kind of breaks that stigma so, I think Ellie is spot-on with that quote.

Could you tell me a little bit about the topic of pay equality between Olympic medal winners and Paralympic athletes? Because there was a pretty large discrepancy up until recently, right?

Yeah, a big, big, big one. So that has been a huge change for Team USA. Tokyo will be the very first Games that I'll be going into with equal pay. I wasn't grandfathered in the last Games. But in my 16 years of competing, I'm finally going to go in with equal pay for Tokyo 2021. So, you can see the journey that these Paralympic athletes have gone through and we love what we do and we're not in it for the pay at all. But we were paid $4,000 for a gold medal, and now I think [Olympic] gold medals are now at $35,000 or $30,000.

So, that's huge. I've been very fortunate and blessed to have all the support I received, but it was not easy. You're pushing your body to the limits and trying to stay on top of the game and bring home medals and you're not even getting equal pay for it. So yeah, it was hard. I think what was also really hard  was that the Paralympics weren't celebrated before when we came home. In 2004, when I came home at 15 years old, I was like, "Well, I guess it's not a big deal because people aren't celebrating." I didn't really think of myself as a professional athlete.

Now that I'm getting equal pay and sponsorship, I really think of myself as a professional athlete, so we've come a long way — a long, long, long way.

One of the fears that is expressed is that if Rio dropped the ball on the Paralympics, then the momentum and progress the movement has had would be lost. Is there a similar fear with the postponement of Tokyo? I'm sure you're monitoring that, so what progress have you seen to keep that ball rolling despite the uncertainty of the world?

Yeah, so I think the film is going to help. There was this question with it, "Okay, should we wait? Have the film come out a little later and closer to the Paralympics?" And we decided to keep the same timeline because it is a perfect time. People are thirsty for sports and they're thirsty for some education. People have time to watch it and really get into the history of the Paralympics and start researching athletes that are involved.

So, I think it is perfect, and I think it allows athletes to use their platforms even more on social media to talk about the Paralympics and their sport. I'm so happy the film is out now.