Death on the job: Workers have never been more expendable than they are now

The lack of unions is bringing everyone down — and in the age of COVID, that's bad for all of us 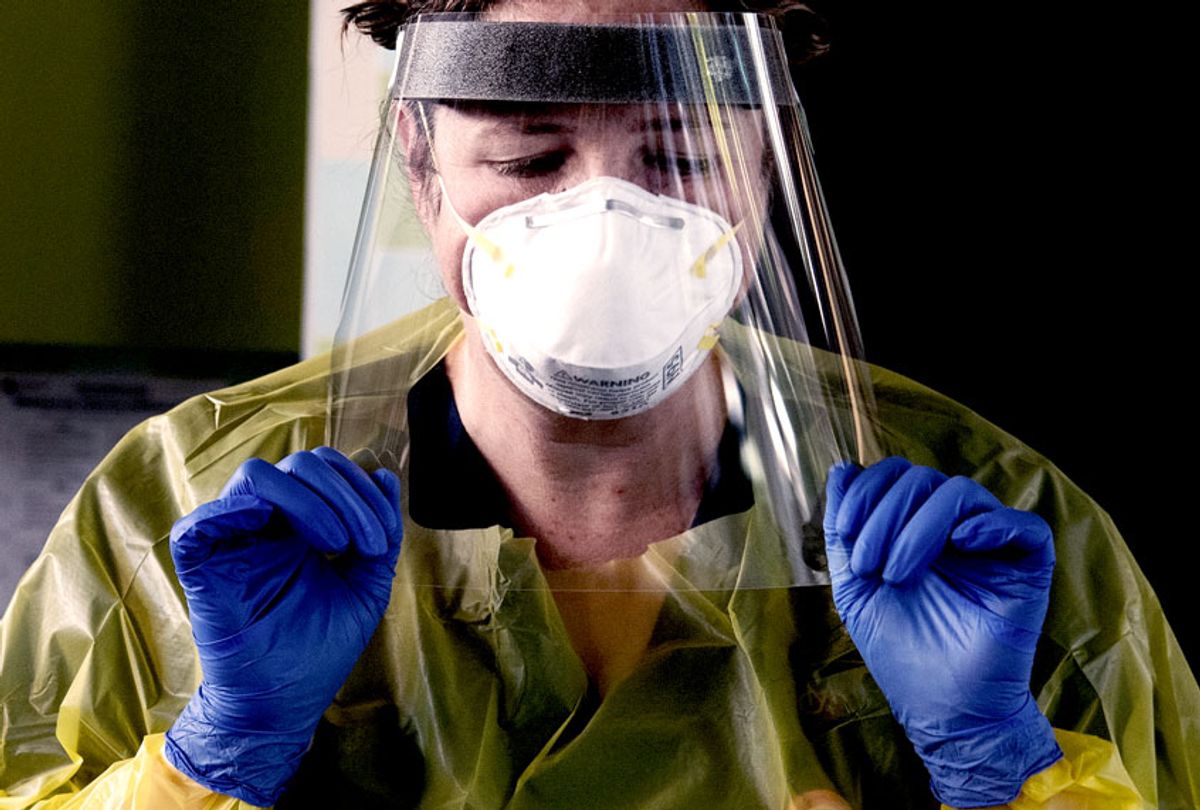 For hundreds of thousands of essential workers, the potential swearing-in of Joe Biden on January 20, 2021, will have come too late to save them.

It's kind of surreal, but even as the corporate media celebrates the role of essential workers, it's clear that the lives of the workforce — and by extension their families — have never been more expendable.

Many of them will have been laid off, as cities, counties, states, school districts and transit authorities add them to the list of 1.5 million public sector workers already laid off — all because President Donald Trump and Majority Leader Mitch McConnell blocked efforts by Speaker Nancy Pelosi to provide the local aid so badly needed.

And those folks will be the lucky ones.

Thousands of other essential workers will have already died from the virus that Donald Trump has done all he could do to spread as far and wide as possible, thanks to his inaction at the federal level and inability to coordinate a national public health response.

An even larger number of first responders, health care professional and other essential workers will have survived their bout with COVID, only to face the prospect of long-term respiratory, coronary or nervous system damage from a virus we still know so little about.

The time line for our current crisis goes back to decades of disinvestment in America's public health infrastructure amid an obscene military buildup set the stage for this virus's explosion. That, multiplied by the years of decline of the American labor movement, set the stage for the devaluation of the lives of American workers playing out now.

The result is a kind of slaughter that has largely gone under-reported, even as it picks up steam and claims more lives of essential workers.

There's just no countervailing force — not the unions, not their political allies — strong enough to counter the forces of avarice from own our government, the leaders from which have been pressing for a faster opening of the economy than public health experts deem wise.

That's a particular shame, because time and time again, the unions and their leadership know very well the best way to protect their workers and save lives. In a pandemic that has the aftereffect of saving everyone's lives, as the virus has no borders and does not differentiate between union members and non-members.

Indeed, the direct links between better wages and health care benefits and union membership are well established. What is less widely appreciated is the direct link between labor representation and safer workplaces. Workers that are not represented are more at risk from sudden accidental death or premature demise from an occupationally related disease.

The union label as safety net

It should come as no surprise that that it is the undocumented construction workers of color who are at most risk of death or serious injury in these non-union worksites.

A Harvard University occupational health study of anti-union so-called "right to work" states, based on data from 1992 to 2016, found that for every one percent decline in the rate of unionization in Right to Work states, there was a five percent increase in the rate of workplace fatalities.

"In total, RTW [Right to Work] laws have led to a 14.2% increase in occupational mortality through decreased unionization," according to study's abstract. "These findings illustrate and quantify the protective effect of unions on workers' safety. Policymakers should consider the potentially deleterious effects of anti-union legislation on occupational health."

Long before COVID darkened our doorstep, every year thousands of workers were dying on the job of avoidable injuries and tens of thousands more from occupationally related illness — and yet, it never seems to be a national priority.

In 2017, 5,147 workers lost their lives on the job as a result of traumatic injuries, according to the AFL-CIO.  "This does not include those workers who die from occupational diseases, estimated to be 95,000 each year."

The AFL-CIO continues: "Chronic occupational diseases receive less attention, because most are not detected until years after workers are exposed to toxic chemicals, and occupational illnesses often are misdiagnosed and poorly tracked. All total, on average 275 workers die each day due to job injuries and illnesses."

Over the years, since the creating of the Occupational Safety and Hazards Administration in the 1970s, enforcement and the resources to fund it have waxed and waned, depending on which party was in power and their overall regulatory philosophy.

But with the arrival of Donald Trump in the Oval Office, we were gifted a chief executive who was ideologically opposed to any government regulation of the private sector. Hence, he appointed corporate lobbyists to dismantle regulatory agencies from within and that was part of what also set the stage for his abject failure in containing the virus.

Trump was also openly hostile to the federal unions, and signed three executive orders to drive them out of the government workplace — where they had been since 1962, when President Kennedy signed off on collective bargaining for federal workers.

With the arrival of COVID-19, Trump refused to protect his own workforce, which as president he was responsible for. In the process, he helped to spread the disease throughout the nation even as he denied it was a problem.

As the virus spreader-in-chief resisted testing for the general population, his administration failed to provide personal protective equipment for federal employees in heavy contact with the public, in transit, and in congregant settings with patients and inmates.

It seems like Trump was specifically hellbent on ignoring the words of the unions and of the federal workers who, from the beginning, foresaw what was going to happen.

They wanted masks and testing and when he wouldn't oblige them, it went largely unreported because with just a few exceptions the corporate media ignores the day in and day out circumstances of America's working class.

It started with the lack of outrage over Trump's ignoring the Transportation Security Administration officers who were sentries on the frontlines during the earliest phase of the pandemic as his chaotic travel policy set off panic at airports.

The federal government's dereliction of duty soon extended to  the Transportation Security Administration, the Veterans Administration and Bureau of Prisons.

In addition, four Federal meat inspectors, members of the American Federation of Government Employees  (AFGE) died from the virus and in the process exposed their families to it.

"The industry is working with the USDA and headquarters to avoid releasing any of this information so that they can keep people working in these plants no matter what," Paula Schelling, the acting president of AFGE's National Joint Council of Food Inspection Locals, told me. "For us it is critical to know these numbers; the number of people sidelined: the number of people who were in contact with someone who tested positive and the number of facility employees who have tested positive."

As dozens of private sector union meat processing workers died from COVID, and many more were sickened, President Trump used the power of his office to help the meat lacking industry blow off local public health officials pressing for transparency and employee testing as they faced an explosion in cases.

Meat producers pushed back against testing and regulation by claiming that the nation's meat supply was in jeopardy. In April, that claim prompted President Trump to invoke the Defense Production Act, ordering all meat plants to stay open because they were critical infrastructure.

As the worker body count grew and the union's concerns ignored, the virus spread well beyond the meat processing plants and into the communities where they were located.  This was made possible by the Trump administration using the power of the federal government to help the meat processing industry frustrate and successfully resist local public health efforts to suppress the virus.

"One huge thing to think about is how Trump used his authority under the Defense Production Act to compel  continued production in the meat industry but he wouldn't use that same authority to create a national response to save lives by ramping up testing and contact tracing, or a federal PPE standard," said John Samulesen, president of the Transportation Workers Union International, which represent transit and airline sector workers.

"We shall not be moved"

From the very beginning of this national tribulation, it has been the nation's unions standing up for their members and the public health pushing back on risky and expedient decisions by ill-informed managers.

Consider the JetBlue flight crew in Florida in March that refused an order to continue flying after they had been exposed to a coronavirus-positive passenger.

In that case, a manager told the fight crew, represented by the Transportation Workers Union, that they should keep working until they were symptomatic, because they could not spread it until then.

That manager, of course, was wrong. As is now widely recognized, people can be contagious and spread this scourge even when completely asymptomatic. The workers were right. Their bosses were wrong.

Again, the union saw this coming. The unions saw to it that the flight crew got two weeks' pay to self-quarantine and in the process saved their co-workers and the flying public from an exposure some of them might not have survived.

Early on in New York City, when just a handful of COVID cases had been reported, TWU Local 100 workers in the subway decided to wear masks for their own protection but were written up by managers who said it was not part of their uniform and they might frighten the public.

City officials parroted CDC guidance that said healthy people should not, and need not wear masks so they could save them for the healthcare workers. (They didn't have enough for them either.)

131 MTA employees, over half TWU Local 100 members, died from the virus.

As we reported in the Chief-Leader, unions representing nurses and New York City's FDNY EMS warned in March that the CDC's expedient watering down of occupational health standards, to compensate for the scarcity of equipment, posed a risk to their members' health, their families and the very viability of the entire public health response.

They warned that the CDC's efforts to manage PPE inventory by promulgating flawed occupational health regulations would help spread the disease and risk the lives of health care professionals.

You see a pattern?

Sliding guidance kills — and when unions get ignored, lots of people die.