"To say that only law enforcement is correct is not the message we need to hear," said actual store owner Tom Gram 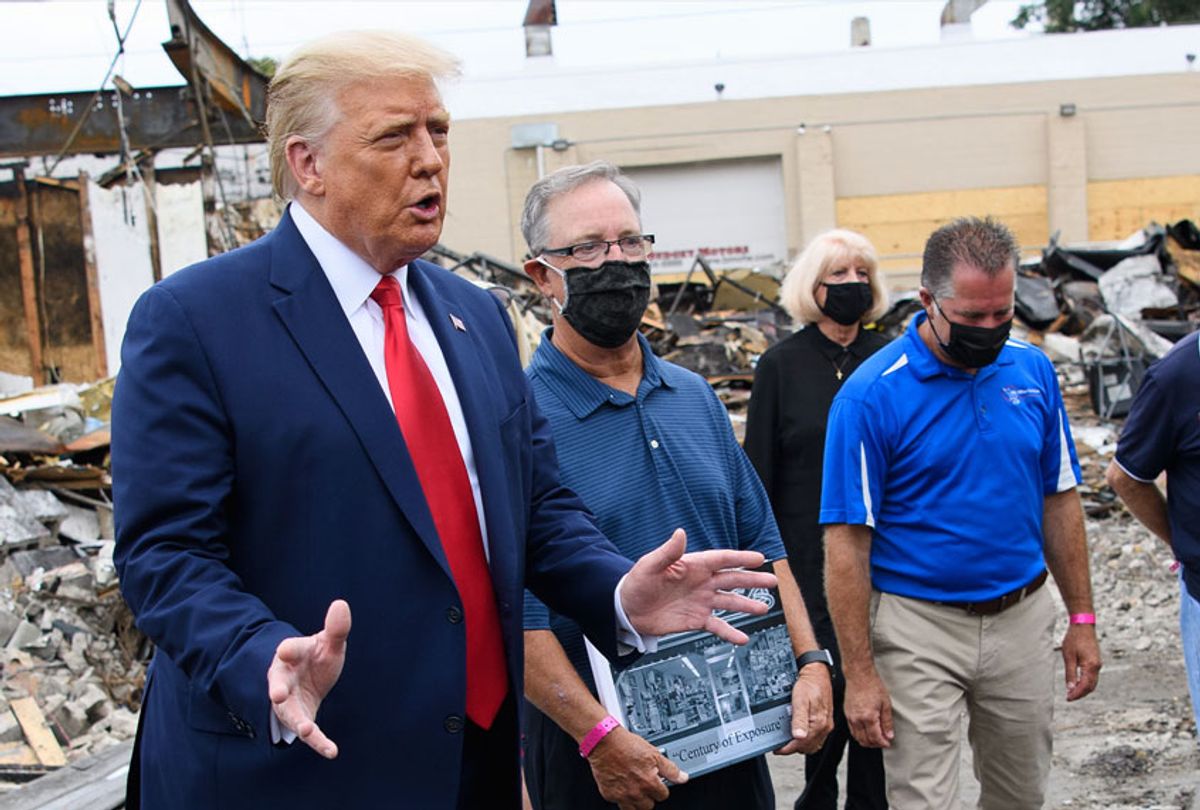 US President Donald Trump speaks to the press as he tours an area affected by civil unrest in Kenosha, Wisconsin on September 1, 2020, as John Rode(C), the former owner of the building that contained Rode's Camera Shop looks on holding a sign. (MANDEL NGAN/AFP via Getty Images)
--

A Kenosha small business owner is accusing President Trump of using his trashed store as a political prop, after Trump deceptively featured the shop's former owner in a Tuesday press conference.

Tom Gram lost his century-old camera store when it burned to the ground amid last week's unrest in the city. The president had asked Gram if he would participate in his Tuesday tour of the damage, but after Gram refused, Trump featured a former owner of the business who praised the president on camera.

Gram bought Rode's Camera Shop from the Rode family eight years ago, and has worked there for more than four decades, according to Milwaukee NBC affiliate WTMJ.

Gram told WTMJ that the White House had called him Monday to ask if he'd join Trump on the tour, which would include a media spot in front of his burnt-out store. Gram says he immediately declined.

"I think everything he does turns into a circus and I just didn't want to be involved in it," Gram said. State and local leaders had objected to Trump's visit ahead of time.

Gram was later surprised when he saw the store's former owner on TV in what would have been his place. "John Rode III, owner of Rode's Camera Shop," the president said, introducing Rode at a roundtable.

Rode commended Trump's response to the unrest in his city.

"I just appreciate President Trump coming today, everybody here does," Rode said. "We're so thankful we got the federal troops here. Once they got here things did calm down quite a bit."

"A day earlier we would have saved your store," Trump added.

Gram said that the president's claim that Rode was the "owner of Rode's Camera Shop" was deceptive, as were Rode's remarks about Trump, which Gram saw as intended to convey the views of the store's current owner — which would be Gram.

An Associated Press report of the event describes Rode as the "owner" of the store.

Trump also said that "Kenosha has been ravaged by anti-police and anti-American riots" and that "reckless far-left politicians continue to push the destructive message that our nation and our law enforcement are oppressive or racist — they'll throw out any word that comes to them."

"These are not acts of peaceful protests, but domestic terror," he said.

The president did not mention Jacob Blake, the Black father paralyzed from the waist down after being shot in the back seven times by a Kenosha police officer in front of Blake's children. The incident sparked several days of protests studded with unrest, including two deadly shootings over the weekend, for which a 17-year-old Trump supporter is currently in police custody.

"I think there's a lot of good people in this community and to say that only law enforcement is correct is not the message we need to hear right now," said Gram, the actual, real-life owner of the camera store.