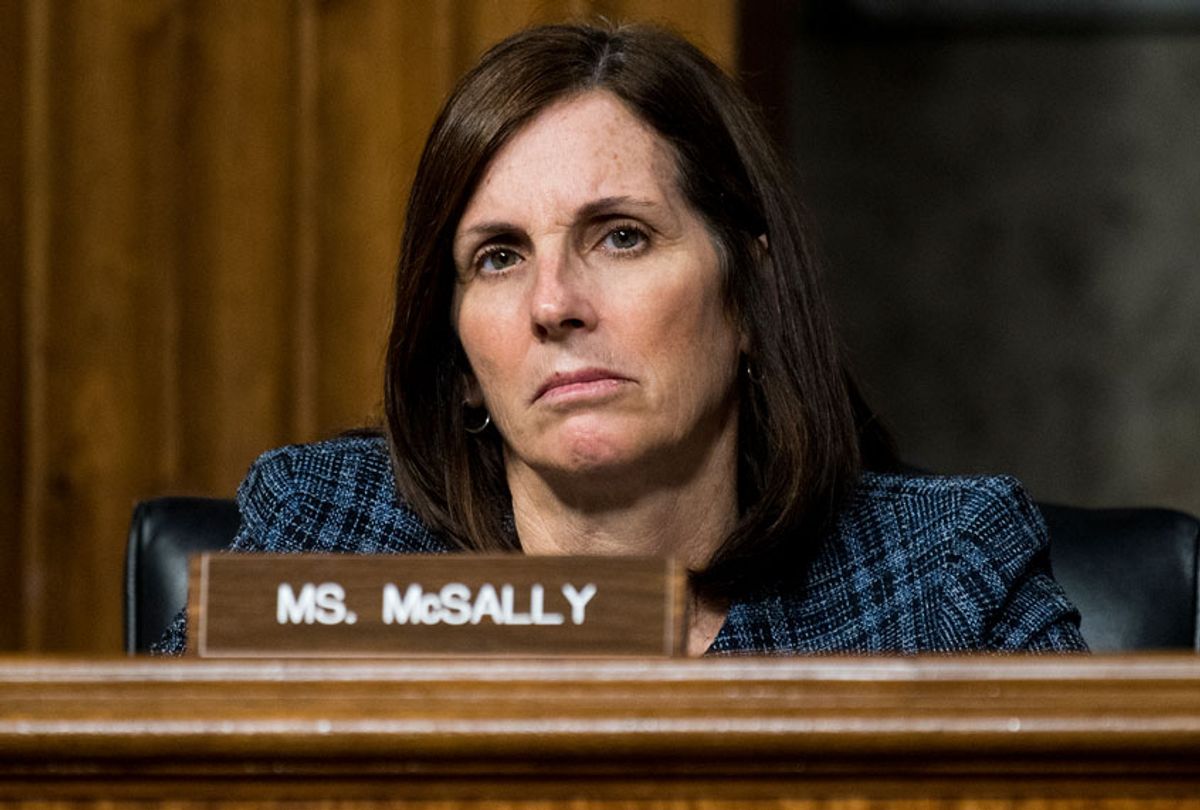 Sen. Martha McSally, R-Ariz., trails retired astronaut Mark Kelly by 17 points in a new Fox News poll that had plenty of bad news for Republicans up for re-election in November.

The poll shows Kelly leading McSally 56-39 among likely voters after another recent poll showed the incumbent Republican losing by 19 points.

McSally, who lost her 2018 Senate bid to Sen. Kyrsten Sinema, D-Ariz. before being appointed to the seat previously held by the late Sen. John McCain, is by far the most vulnerable Republican up for election this fall. Kelly, the husband of former Rep. Gabby Giffords, D-Ariz., has consistently led in the polls and in fundraising. McSally's deficit has grown after she urged supporters to give up meals to donate to her campaign.

The Fox News poll found that even many likely Trump voters do not support her campaign, with 89% of the president's supporters backing McSally while 96% of Joe Biden supporters back Kelly. About 14% of Republicans said they plan to vote for Kelly, while only 3% of Democrats support McSally.

Trump's collapse in Arizona has made things even more difficult for the senator. McSally has fully embraced the president's agenda in her campaign but the Fox News poll found that Trump trails Biden, 49% to 40%, among likely voters in the state. Trump trails by 46 points among Hispanic voters, 16 points among women, and 12 points among seniors, who had been a core part of the president's base. Although there are hypothetical pathways for Trump to win the Electoral College while losing Arizona, in practical terms it would likely be a sign of a Biden landslide.

The poll shows that the formerly red state continues to shift away from Republicans. Trump beat former Secretary of State Hillary Clinton by just under four points in Arizona in 2016 but Mitt Romney carried the state by 11 points in 2012. Sinema became the first Arizona Democrat elected to the Senate in 30 years in 2018. Even Republicans are now worried that Trump and McSally are so unpopular it may cost them the state legislature for the first time in 50 years.

The Fox News poll showed that Arizona voters overwhelmingly trust Biden to handle the coronavirus pandemic more than Trump, and prefer Biden on criminal justice and policing issues as well, a trend that is also evident in other states.

Biden leads Trump 50% to 46% in North Carolina, according to the survey, where voters prefer the Democrat to handle the coronavirus, by a nine-point margin. The poll also found Democrat Cal Cunningham leading incumbent Sen. Thom Tillis, R-N.C., 48% to 42%, among likely voters. Trump carried North Carolina by less than four points in 2016.

Biden also leads Trump by 50% to 42% in Wisconsin, one of the key states that tipped the election to Trump in 2016. Voters in the Badger State prefer Biden to handle the pandemic by a whopping 17 points. Trump carried the state by just 23,000 votes in 2016, winning about 47% of the vote. The Fox poll found that his approval rating in the state is down to 45% while 54% of the state disapproves of his job performance.

Trump, despite frequently echoing the network's talking points and calling into its talk shows for softball interviews, accused Fox News of producing "suppression polls" to hurt his campaign. Trump claimed the Fox polls are "fake news."

"I believe we are leading BIG!" he added.

Biden did get one piece of bad news after the conventions, a Monmouth poll that showed the two candidates effectively tied in Pennsylvania after a July poll that showed Biden leading by 7-10 points.

FiveThirtyEight election forecaster Nate Silver pointed out that Biden "is still more likely than Trump to win Pennsylvania," as well as Arizona and Wisconsin. Silver's Electoral College projection gives Biden about a 7-in-10 chance to win the election, he wrote, "almost exactly the same position he was in before the conventions."