All that right-wing flag-hugging was a cover story for racism, more than a sincere expression of patriotism 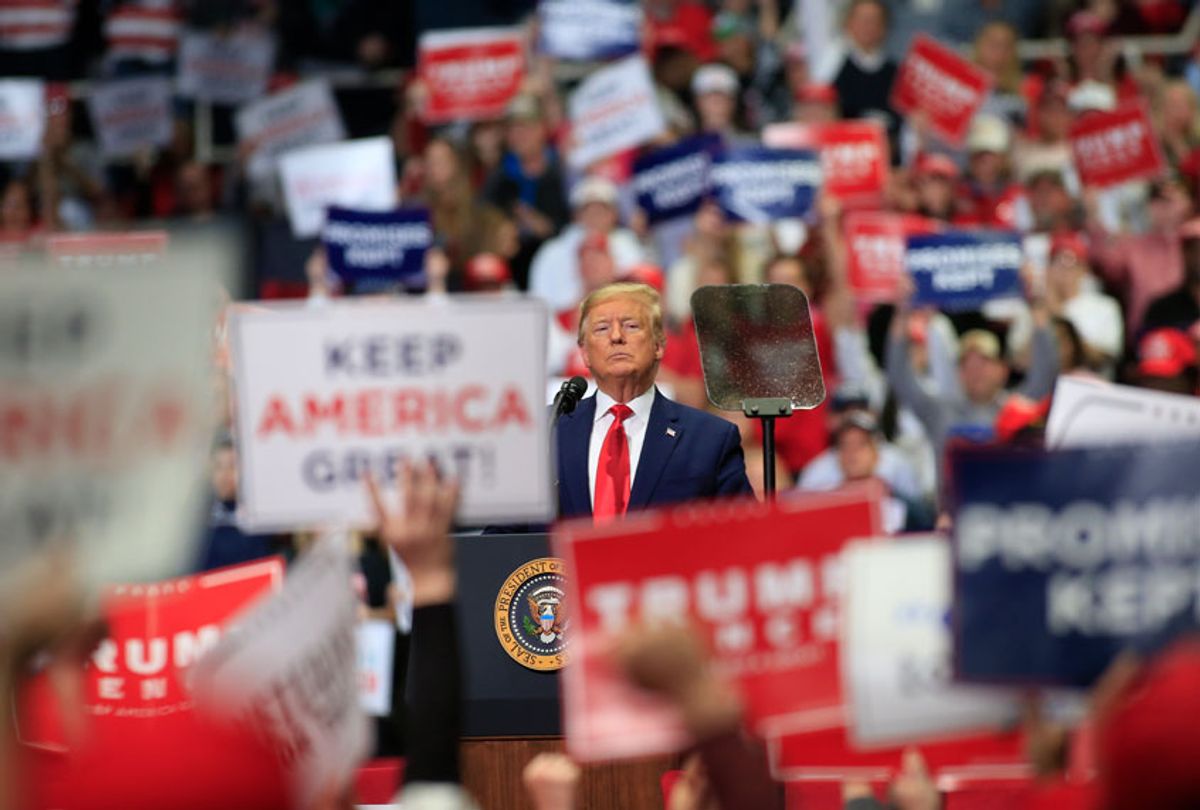 U.S. President Donald Trump speaks to supporters during a rally on March 2, 2020 in Charlotte, North Carolina. Trump was campaigning ahead of Super Tuesday. (Brian Blanco/Getty Images)
--

Donald Trump is likely lying, of course, in denying a new report by Jeffrey Goldberg of The Atlantic that accuses the president of calling the fallen American soldiers of World War I "suckers" and "losers."

We know this because of Trump's pathological pattern of telling lies, first of all. But also because in his tweeted denials, Trump now claims he never called the Sen. John McCain a "loser" for being captured during the Vietnam War, even though there's a recording of him doing so, in the same rant during which he declared, "I like people who weren't captured." Trump was so proud of this smear of the late Arizona Republican that he tweeted it out at the time.

Beyond his implausible but vehement denials, Trump's other tell is that he falsely accuses others of doing what he himself has done. In this case, Trump has spent years bashing athletes who kneel during the national anthem, falsely accusing them of dishonoring veterans and war dead. In truth, the tradition — started by former San Francisco 49ers quarterback Colin Kaepernick — was formed with input from a former Green Beret as a way to speak out against racism and police brutality while still honoring the troops.

This is the same guy who found out that Russians were offering bounties to Afghan fighters who killed American soldiers and shrugged it off. He told a grieving widow of a U.S. Army sergeant that "he knew what he signed up for", and then accused her of lying when she spoke out about it. He smeared the family of Army Capt. Humayun Khan, who was killed in action in Iraq, when Khan's parents spoke at the Democratic National Convention. In between Trump's badly acted efforts at pretending to care about the troops, his actual contempt has often shown itself.

All of this is why it would be unwise to hold your breath waiting for this story to put a dent in that stubborn 41 to 43% approval rating, below which Trump has rarely dipped throughout his entire presidency. Nor will Trump's voters be fussed about the Washington Post adding to Goldberg's reporting with a story sourced to a "former senior administration official" that Trump had "told senior advisers that he didn't understand why the U.S. government placed such value on finding soldiers missing in action because they had performed poorly and gotten caught and deserved what they got."

The Trump base, which is stable enough to keep Trump within stealing range of the 2020 election, loves to talk about how patriotic they are and to make a big show out of how much they supposedly love the troops. As this unquestioning loyalty to Trump makes clear, it's all nonsense. Given a choice between white supremacy and support for the men and women of the military, Trump voters will pick racism every single time.

As with Trump, much of the flag-hugging and declarations of love for "our troops" is just an act for the conservative base. As with the showy piety of the Christian right and the outrage over imaginary pedophilia play-acted by QAnon adherents, the ostentatious "honoring" of troops is just another performance meant to put a moralistic gloss on the deeply immoral ideology of the right.

This was blatant in the way Trump and his supporters weaponized their phony love of the troops to bash Black Lives Matter protesters in pro sports.

The real reason conservatives are angry at Kaepernick, or other athletes who kneel during the national anthem — who are predominantly but not exclusively Black — is plain old racism. Conservatives are loath to admit out loud that it bugs them to see athletes show support for racial equality, since admitting that comes uncomfortably close to admitting to racist beliefs. Instead, they pretend to be outraged about the supposed insult to "the troops," even though there has never been an insult to the troops embedded in this somber and respectful form of protest.

The very notion that there's anything disrespectful to the troops about demanding racial equality also overlooks the long history of how people of color have served with honor in the military, while continuing to face discrimination and abuse at home. A number of civil rights activists in the 50s and 60s were World War II veterans motivated by anger over how much they had sacrificed for America, only to return home to be treated, as activist Hosea Williams once said, "like a common dog." The Tuskegee Airmen, a predominantly Black group of fighter and bomber pilots in World War II, were as famous for the work they did to desegregate the military and fight for civil rights in civilian life as they were for their feats of bravery during the war.

Currently, 43% of active duty military are people of color. There is no conflict between the fight for racial equality and supporting the troops. Indeed, doing the latter requires the former.

Right-wing pieties about flag, troops and country have often been a bunch of hot air meant to disguise what is really forceful opposition to what are supposed to be shared American values of freedom, justice and equality. Consider how many people on the right love the Confederate battle flag, valorizing an act of rebellion in the name of racism and chattel slavery that led to the bloodiest conflict in American history. In his typical ham-fisted fashion, Donald Trump simply lays bare how much of right-wing patriotism is pageantry designed to wrap racist impulses in the flag.

As I wrote on Thursday, polling data shows that the majority of Republicans have turned their backs on American values, the ones our troops take an oath to protect, such as freedom, equality and the rule of law. If protecting white supremacy requires abandoning bedrock American values, such as the universal right to vote, so-called conservatives seem distressingly eager to do so.

There's literally nothing Trump can say or do to insult the troops, even those who have died in service to the nation, that would cause his supporters to turn away him. What's become clear is that they never really believed that stuff in the first place. This is and always was about their commitment to racism, a commitment they believe — reasonably enough — that Trump shares. As long as he keeps delivering on that toxic current in American history and American life, his supporters will forgive him for everything else.