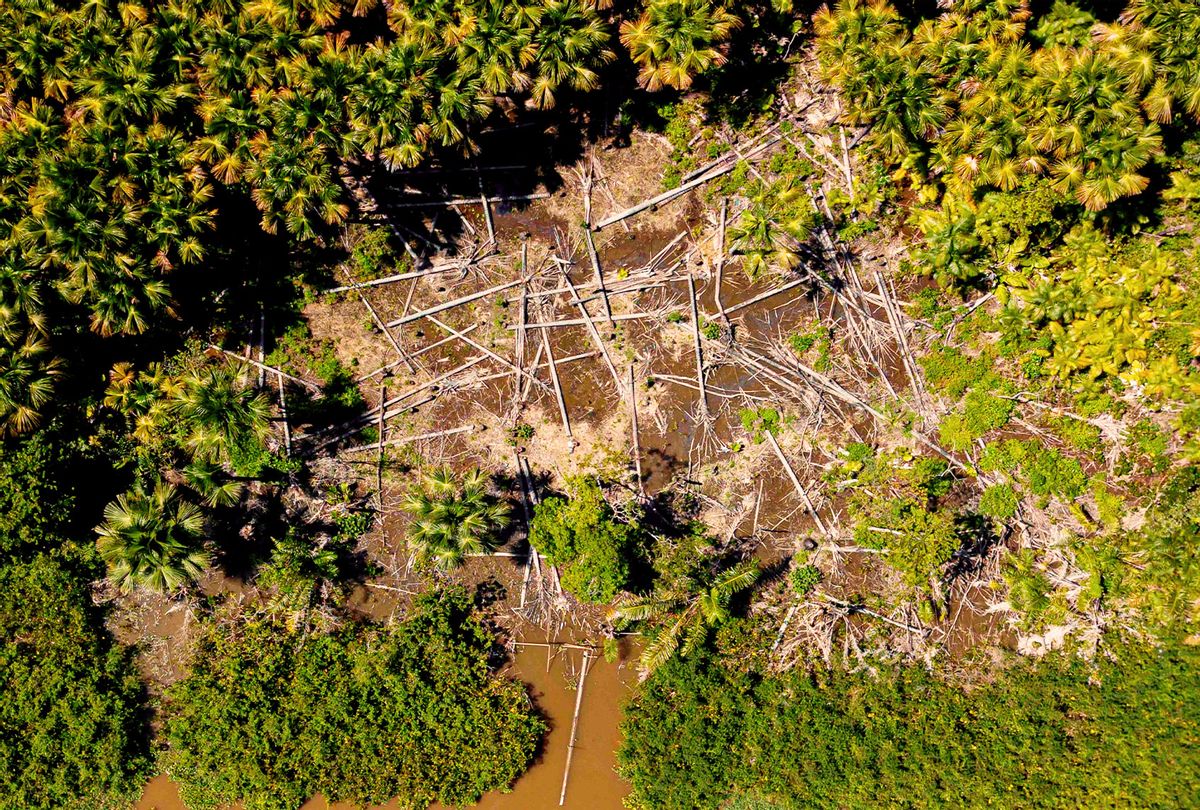 Aerial view of a deforested area in the municipality of Melgaco, Para State, Brazil, on July 30, 2020. (TARSO SARRAF/AFP via Getty Images)
--

A new report from the World Wildlife Fund (WWF) reveals that population sizes of "mammals, birds, amphibians, reptiles and fish" are down by 68 percent since 1970, amounting to an "unprecedented" rate of destruction of Earth's diverse range of species.

"Biodiversity is fundamental to human life on Earth, and the evidence is unequivocal – it is being destroyed by us at a rate unprecedented in history," the WWF explains in its report. The authors cite a number of reasons for the massive loss of wildlife including the industrial revolution, human population growth, increases in global trade and consumption, urbanisation and climate change. The WWF argues that humans are overusing the planet's biocapacity by at least 56 percent, in the process polluting most of our oceans, destroying 85 percent of the area of wetlands and significantly altering 75 percent of the planet's ice-free land surface.

"Too few of our economic and financial decision-makers know how to interpret what we are hearing, or, even worse, they choose not to tune in at all," the authors explain. "A key problem is the mismatch between the artificial 'economic grammar' which drives public and private policy and 'nature's syntax' which determines how the real world operates."

Salon spoke by email with Jeff Opperman, Global Freshwater Lead Scientist at the World Wildlife Fund, who co-authored the freshwater section of the new report. In that section, Opperman and his colleagues learned that freshwater species populations experienced the most dramatic population decline, with their population falling by 84 percent.

"Our planet is sending alarm signals between recent wildfires, the COVID-19 pandemic, and other extreme weather events," Opperman told Salon. "We're seeing our broken relationship with nature play out in our own backyards. The steep global decline of wildlife populations is a key indicator that ecosystems are in peril. Healthy ecosystems provide a range of benefits to humans like clean water, clean air, a stable climate, flood protection, and pollination of food crops. When populations decline and ecosystems begin to unravel so does nature's ability to support human health and livelihoods."

He argued that the situation, though dire, is not insurmountable.

"Scientific models show that we can 'bend the curve' to halt the loss of nature," Opperman explained. "Modeling predicts that declining trends can be flattened and reversed with urgent and unprecedented actions. These actions include transforming how we produce food; aggressive movements to tackle climate change; and investments in nature-based solutions that provide direct benefits to society, like coastal protection. It is also imperative that we transform our economic systems to reflect the 'natural capital' that truly underpins our economic prosperity."

He concluded, "In sum, the report urges world leaders to treat biodiversity conservation as a strategic investment to preserve human health, wealth, and security."

Michael E. Mann, a distinguished professor of atmospheric science at Penn State University, told Salon by email that the WWF's report is one more sign that "profligate human consumption, extraction of resources, exploitation of ecosystems, and reckless polluters, are destroying this planet." He argued that "we need far more extensive preservation and conservation policies, international agreements to protect key terrestrial and marine ecosystems, consequences for corporate polluters, and an ethic that values the preservation of life over the accumulation of wealth."

The WWF's report is not the only recent scientific study that indicates humanity is heading toward a mass extinction event. A paper published in Science found that the current pace of man-made global warming far exceeds any natural climate fluctuations as they have existed in the Cenozoic era, or the period that existed in the planet's history since an asteroid hit Earth roughly 66 million years ago.

"This study reinforces the fact that we're now impacting the climate — and the planet — in ways that are unprecedented even over geological timescales. It's a warning shot over the bow if there ever was," Mann wrote to Salon.

In response to the report, English broadcaster and natural historian Sir David Attenborough told the BBC that we live in a new geological period known as the Anthropocene, one in which human activity fundamentally alters the planet. He argued that this could be a period in which people achieve a balance with the natural world and become caretakers of our planet rather than destroyers of it.

"Doing so will require systemic shifts in how we produce food, create energy, manage our oceans and use materials," Attenborough said. "But above all it will require a change in perspective. A change from viewing nature as something that's optional or 'nice to have' to the single greatest ally we have in restoring balance to our world."