Inside the mind of an anti-vax parent 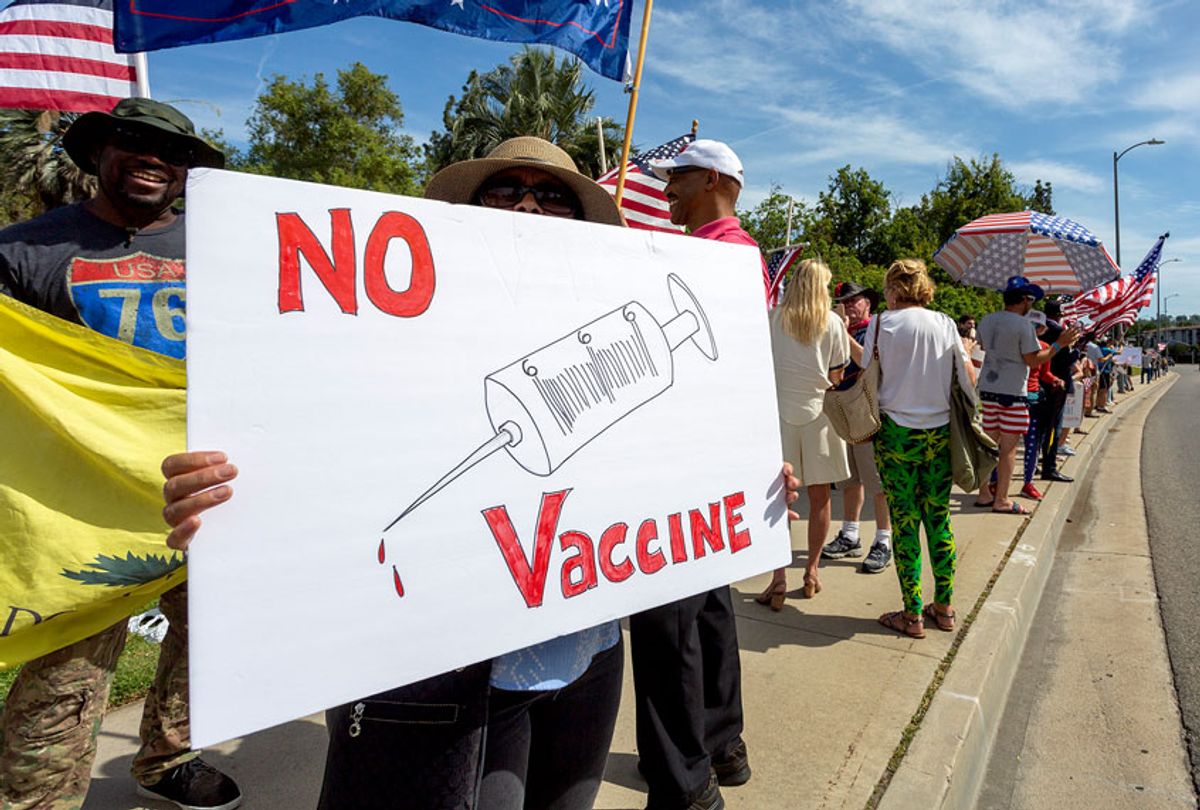 A protester holds an anti-vaccination sign as supporters of President Donald Trump rally to reopen California as the coronavirus pandemic continues to worsen, on May 16, 2020 in Woodland Hills, California. (David McNew/Getty Images)
--

Excerpted from Anti-vaxxers: How to Challenge A Misinformed Movement by Jonathan M. Berman. Reprinted with Permission from The MIT PRESS. Copyright 2020.

Who is the typical "anti-vax" parent? What motivates them to disregard the advice of physicians, scientists, and public health officials? What do they value? Whom do they see as their peers? And how has their thinking gone astray? We have looked at cognitive effects, such as biased assimilation, the credibility heuristic, selective perception, the Dunning-Kruger effect, and backfire effects. We have also looked at how the availability of misinformation can lead people astray. We have examined at length the arguments made by major figures in the anti-vaccine movement, such as Andrew Wakefield, Robert F. Kennedy Jr., Robert Sears, and the Geiers. We have examined the demographics and religious beliefs of anti-vaccine activists and their historical predecessors. What does this all add up to? Let's paint a portrait of typical anti-vaccine parents, based on what we've learned them.

This exercise isn't intended to set up straw men that will be easy for us to knock down, but rather to give us a concrete image of those to whom we can direct messaging. Anti-vaccine parents are deeply concerned with being good parents. They are college educated and usually members of the middle class. They have read multiple parenting books and perhaps belong to parenting groups in their neighborhood or online. They have made decisions, in conjunction with discussions with their peers, about what kinds of parents to be. Breast or bottle feed? Public or private school? They may see themselves as "crunchy" parents, who are interested in "attachment" or "natural" parenting.

Let's give them names: Jim and Jenny, who live in Measlton, Michigan. One day Jenny sees a discussion in the Facebook group Measlton Moms. One parent says, "I went to the pediatrician and they wanted to vaccinate my baby. I said no. I don't want them injecting toxins into my baby." Another parent chimes in: "My daughter is vaccine injured. After she got the MMR shot, she had a fever for three days and then had seizures." These stories alarm Jim and Jenny. They want to learn more before making a decision.

Jim researches articles on websites like Natural News and InfoWars. Jenny finds books on Amazon. Some of what they read is alarming. Claims of medical fraud and toxins that poison the blood being injected into children. Comparisons to Nazi doctors experimenting on children. Jim's cousin weighs in when she's visiting one day: "I didn't vaccinate my kids. Look how healthy they are." Rather than appealing to science, these sources appealed to moral concerns.

Moral foundations theory is a theory from social psychology meant to explain the variations in how people respond to moral arguments. It posits that moral arguments tend to be based on certain foundations: concerns about care or harm, about fairness, about loyalty, about authority, and about purity. Some research indicates that these concerns respond best to arguments premised on harm or fairness and that conservatives tend also to respond to arguments based on authority, loyalty, and purity. Jenny views herself as more liberal and is swayed by the arguments claiming that vaccines harm children and that it is unfair for the government to impose such a choice on her family. Jim, who views himself as more conservative, is swayed by these arguments, but also by the authoritative doctors and scientists that seems to support anti-vaccine views and by revulsion at the idea of compromising his child's purity by injecting it with foreign matter. They make what they feel is the right choice.

When Jenny takes the baby to its checkup with the pediatrician, Dr. Smith brings up its vaccine schedule. Jenny refuses and has come armed with information she's pulled from her sources on the internet and in books. She insists that there's mercury in vaccines that causes autism. She lists chemicals with long names that are in vaccines. Dr. Smith is taken aback. She agrees to delay but will try to persuade Jenny again at the next office visit. At the next office visit, Dr. Smith has come prepared with responses to the anti-vaccine claims made by her patient. However, for every answer she can provide, Jenny has a rejoinder. The pediatrician is again delayed in vaccinating. Jenny feels ambushed by Dr. Smith. "I've done my research," she says. "As a mother, I know what's best for my own child, better than anyone else."

Jim and Jenny feel they've done their best for their child. They identified a potential danger, did research, and avoided that danger, which is the duty of good parents, after all. When Dr. Smith tried to convince them with facts and data alone, she failed because Jim and Jenny knew they shouldn't just trust whatever the pediatrician says. Long gone are the days of paternalism when the doctor knows best and a patient should simply listen and do what they're told. Jim and Jenny are active in their own health care and that of their children.

Imagine how this scenario would have played out if someone on the Measlton Moms Facebook group had stepped forward after that initial post to say "I had all three vaccinated, and they're doing great." Or if there had been another post with a picture of a smiling child with the caption "She just got her 24-month booster shots!" Perhaps if the sources that presented themselves when Jim and Jenny set out to do research had been better, they might have stopped themselves. Jim may have been directed to New Scientist, Scientific American, or another mostly reliable source, rather than to InfoWars and Natural News. Amazon's algorithm may have directed Jenny to books by Paul Offit, rather than to books by vaccine denialists.

Jim and Jenny's anti-vaccine stance arose in concert with many of the human tendencies, biases, and shortcuts of thinking that we've discussed before. People we know are more trustworthy than people we don't know. Statistics are less convincing than stories. Establishment authorities, such as physicians and federal agencies, engender distrust. Chemicals and substances with long and unpronounceable names can be frightening. We fear that putting things that are not natural into our bodies will make us impure. How we view ourselves and how we appear to our peers informs what we view as good parenting. Now that Jim and Jenny have been convinced they've done the right thing, can their minds be changed? Has someone who was anti-vaccine ever changed their mind?

Jonathan M. Berman is Assistant Professor in the Department of Basic Sciences at NYITCOM–Arkansas. An active science communicator, he served as national cochair of the 2017 March for Science.