Cloud-based life? Scientists believe there may be alien microbes floating in Venus' atmosphere 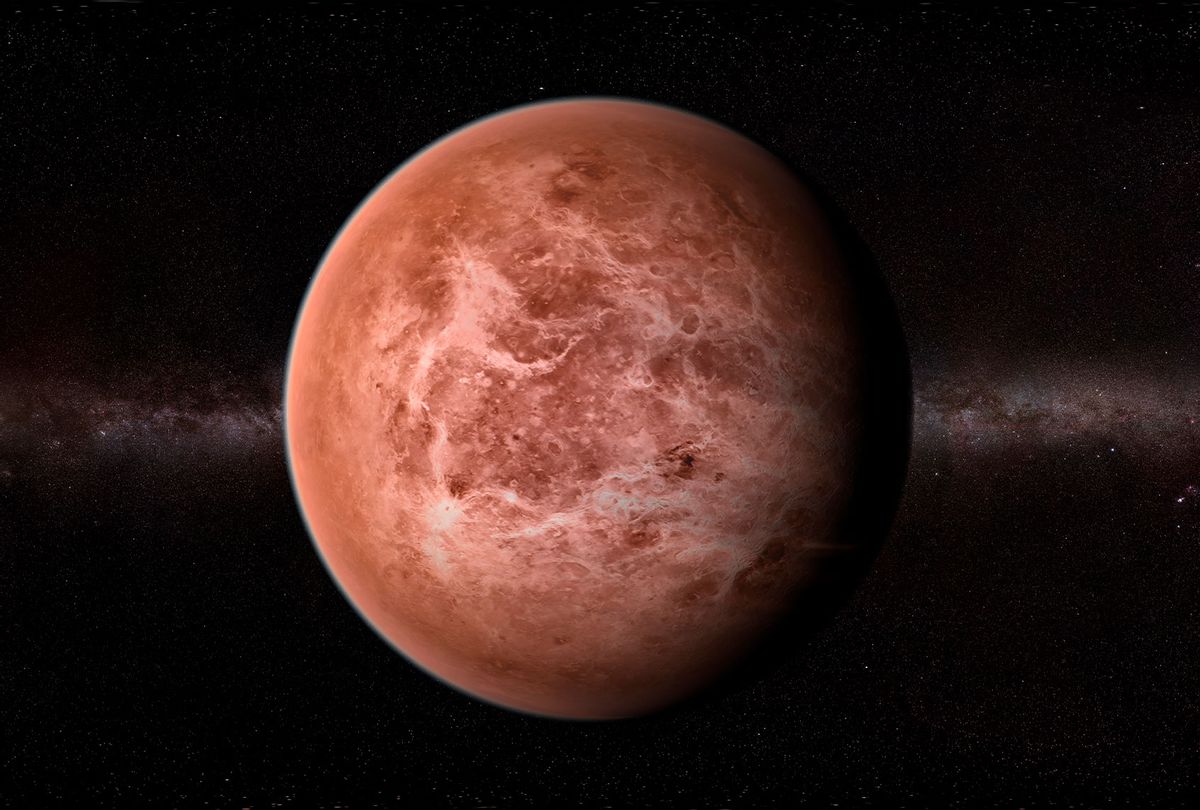 When looking around our solar system for bodies that could potentially harbor life, astrobiologists have generally focused on a few usual suspects: Mars, with its vast canyons, water deposits and mysterious methane emissions. Or Jupiter's moon Europa, thought to be teeming with water. But for obvious reasons, Venus — an Earth-sized world with sulphuric acid clouds and hellacious surface temperatures — hasn't been first of mind in terms of prospects for extraterrestrial life.

A new discovery made by an international group of scientists using powerful telescopes suggests that it is not otherworldly to believe that microbial life exists right now on the second planet from the Sun. In a paper published in Nature Astronomy, astronomers explain how they've detected the chemical phosphine (PH3), a molecule composed of phosphorus and hydrogen, in the upper atmosphere of Venus – and how that appears to be a "promising" sign of life.

"If no known chemical process can explain PH3 within the upper atmosphere of Venus, then it must be produced by a process not previously considered plausible for Venusian conditions," the authors of the paper state. "This could be unknown photochemistry or geochemistry, or possibly life."

It's that last word that really got people talking. Indeed, in an excited press conference today, scientists involved in the study explained how they struggled to find an alternative explanation besides microbial life, that would explain the presence of phosphine gas in the upper atmosphere of Venus. On Earth, phosphine is produced as a waste byproduct of anaerobic bacteria.

Scientists used the James Clerk Maxwell Telescope (JCMT) in Hawaii and the Atacama Large Millimeter Array (ALMA) telescope in Chile, both of which detect light in the wavelengths that can reveal the indelible spectral pattern of phosphine gas molecules. Both telescopes found evidence of phosphine gas only in the upper atmosphere of Venus, where conditions are decidedly cooler and less acidic than on the surface, and air pressures are similar to that of Earth's atmosphere.

At such high altitudes, Venusian winds circulate air in circular swaths as they move from the equator north towards the poles; such air circulation patterns are known as Hadley Cells, and exist on Earth, too, where they are responsible for the trade winds. As scientists explained in the press conference, it would be possible for small organisms, likely microbial, to circulate through these cells without succumbing to Venus's inhospitable conditions lower (or higher) in the atmosphere.

The idea that life might exist up in the hospitable clouds of Venus may be unexpected, though it is not unprecedented. On Earth, there are extremophiles — meaning forms of life adapted to harsh conditions — that live at similarly high altitudes under similar conditions.

Indeed, given what scientists know about Venus' geochemistry, there does not yet appear to be another explanation for this foul gas aside from the possibility of microbial life floating high above the clouds.

William Bains, a co-author of the paper, explained in a blog post on his personal website that the team has tried to figure out over the last two years how a non-living process could produce phosphine in Venus' atmosphere.

"We calculated the rate at which it [phosphine] might be produced by reaction of atmospheric gases with each other, with sulfur haze, with cloud droplets, with surface rocks," Bains wrote. "There is no way that Venus can make phosphine, unless our understanding of Venus is seriously wrong."

In a statement, Clara Sousa-Silva, a research scientist in MIT's Department of Earth, Atmospheric and Planetary Sciences and co-author of the paper, wrote that the group of scientists "welcome" other astronomers to find ways to justify phosphine's presence.

"Please do, because we are at the end of our possibilities to show abiotic [non-living] processes that can make phosphine," Sousa-Silva said.

In the paper, scientists were optimistic but cautious about blatantly stating that there is life on Venus.

"Even if confirmed, we emphasize that the detection of PH3 is not robust evidence for life, only for anomalous and unexplained chemistry," the authors write. "There are substantial conceptual problems for the idea of life in Venus's clouds—the environment is extremely dehydrating as well as hyperacidic."

But what else could it be? Certainly phosphine is difficult to produce chemically without life, but not impossible. Jonathan Lunine, who was not involved in the Nature study but is a professor of physical sciences and chair of the astronomy department at Cornell University, told Salon in an emailed statement that many chemical compounds occur as a result of non-biological processes.

"Phosphine isn't always a biosignature on other planets," Lunine said. "It is found in the dense hydrogen-rich atmospheres of Jupiter and Saturn, where it is understood to be an abiotic product of simple chemistry."

Lunine said it's important to consider the environment of the planet where one is using phosphine as a biosignature. But since Venus lacks hydrogen, it is possible.

"Venus—with an atmosphere in which hydrogen is extremely scarce—is a place where phosphine is a plausible biosignature," Lunine said.

In an interview with Salon, Seth Shostak, a senior astronomer at the Search for Extraterrestrial Intelligence (SETI), told Salon the study is an "impressive piece of work," noting how the scientists spent a lot of time with the spectral signatures which led to the discovery of phosphine. Shostak emphasized that it is not the discovery of phosphine that is "controversial," but the interpretation of its source.

"Is it coming from floating bacteria or not?" Shostak asked. "And if it is, that's a really, really, really important thing, because if there's life on Venus despite the fact that Venus is a planetary toaster, then there's gotta be life all over the place — because Venus isn't the easiest environment" to survive in.

Shostak said that if life does exist on Venus, it likely didn't originate in the clouds, but rather in the oceans that, scientists believe, likely existed on Venus a very long time ago.

"There are always some opportunistic critters, mostly microscopic, that can live in tough conditions, I mean you can find bacteria in the gas tanks of jet aircrafts, in new nuclear reactors," he said. "So, once you get life going it can adapt to almost any kind of environment."

Indeed, the philosophical implications of this finding could be greater than the science of it all, Shostak said.

"If you find life on the next planet over, you might say, 'well, maybe we're not all that special,'" Shostak added.