DeJoy gave $600,000 to GOP after USPS job opened. Should the focus be on his wife's ambassador nod?

After DeJoy donated big to Trump and the Republican Party, his wife was nominated to be the US ambassador to Canada 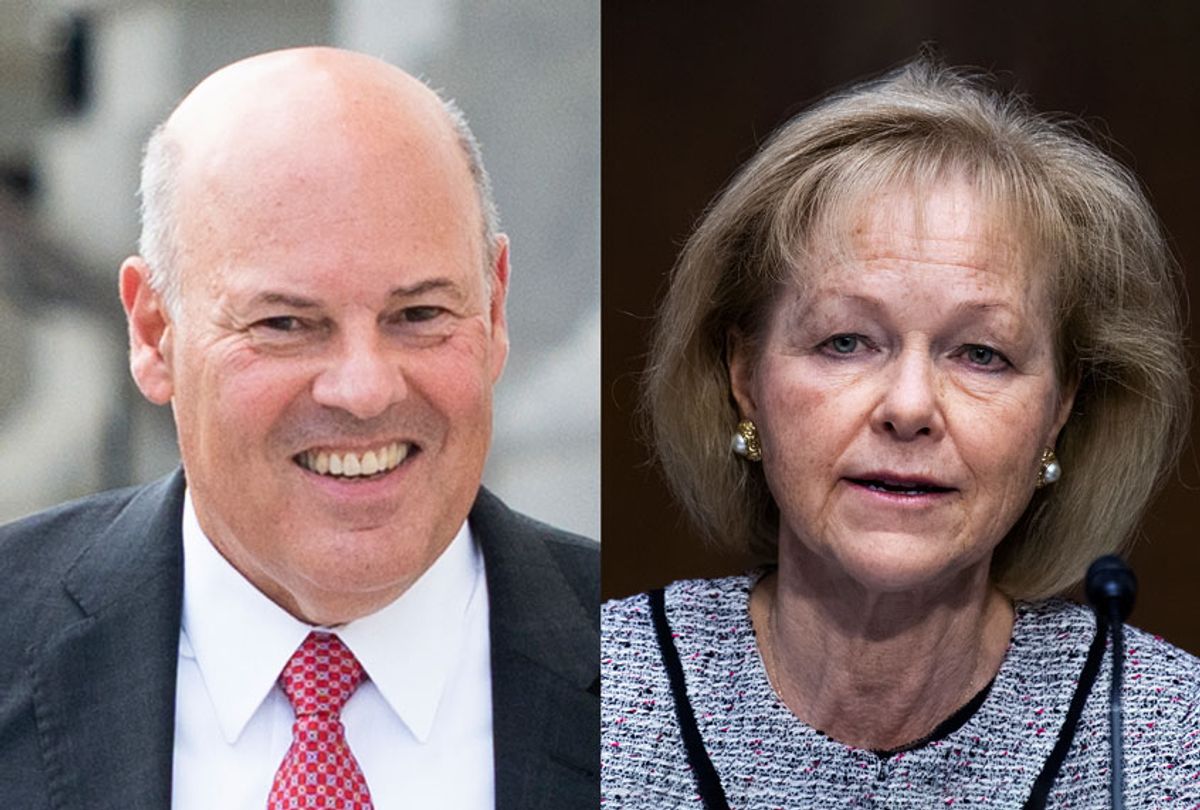 Lisa Graves, the former executive director of the Center for Media and Democracy, testified this week to Congress that Postmaster General Louis DeJoy had donated $600,000 to Republicans after his future job opened up.

Though DeJoy donated the six-figure sum, the inaccurate timeline laid out by Graves obscured the alignment with his wife's nomination to be the next U.S. ambassador to Canada. President Donald Trump nominated Dr. Aldona Wos to the coveted role, and her confirmation is currently pending before the Senate.

"This level of partisanship," Graves said in written testimony to the House Oversight Committee, "undermines public trust in the Postal Service as an institution."

Chairman Gerry Connolly, D-Va., said the hearing would help paint a more complete picture of DeJoy, who has been under near-constant fire over allegations of election mail meddling. Connolly described DeJoy as a "crony" who was "rife with conflicts of interest and potential violations of law." But those alleged conflicts of interest appear to instead be aligned with his wife's political ambitions.

Graves inaccurately claimed in her testimony that DeJoy had given lavishly "to GOP Senate races since last December, when Megan Brennan announced her intention to resign as postmaster general after Trump had enough appointees to get her replaced."

She also said incorrectly stated that "DeJoy suddenly gave the president's campaign and the RNC more than $600K over the span of just eight weeks after the postmaster general opening was announced."

That timeline was not correct. The looming vacancy was first made public two months earlier, when Brennan first announced her retirement on Oct. 16, 2019 — not December, as Graves claimed. At the time, Brennan said her retirement would be effective Jan. 31. However, she later postponed that timetable pending a replacement.

DeJoy did not make any donations in the eight weeks after Brennan announced her retirement, according to Federal Election Commission records. On Dec. 10, he gave the National Republican Senatorial Committee (NRSC) $35,000 — the maximum annual amount — which he had regularly given in previous cycles.

Federal filings also show DeJoy made his first max-out donations to Senate Majority Leader Mitch McConnell, R-Ky., that month, as well as to Senate candidate John James who, if victorious in 2020, would not take office until more than one year later.

A recent corporate filing revealed that Robert "Mike" Duncan, the chairman of the U.S. Postal Service (USPS) Board of Governors, which unilaterally appointed DeJoy, also serves as a director of McConnell's $130 million super PAC.

While the Senate would have had no say in a prospective DeJoy appointment, it would have been charged with confirming his wife, who had made her ambitions for the Canada post clear not long after Trump took office.

On Jan. 6, 2020, Brennan postponed her planned retirement, which at the time was seen as the first signal that the USPS Board of Governors was considering nominating an outsider in the agency's top leadership role.

That same day, the ambassador position opened up. The Trump administration announced that it would move Charges de Affairs Richard Mills, who had filled the office temporarily since August, to the United Nations.

Less than ten days later, DeJoy donated $150,000 to Trump Victory, in two separate chunks, on Jan. 15 — which until that point was his largest single-day contribution. Trump, as president, nominates ambassadors.

Then, on Feb. 11, the White House announced that Trump would soon be naming Wos as the next U.S. ambassador to Canada. The following day, DeJoy made another maximum donation of $35,000 to the NRSC, FEC flings show. (The NRSC is dedicated to electing Republicans to the Senate, the body which confirms ambassadors.)

Finally, on Feb. 19, 2020, the week after the White House announcement and the NSRC donation, DeJoy made his biggest single donation to Trump Victory to date: $210,600.

DeJoy did not donate again until April. When he did, it went to House GOP candidates and entities, according to campaign filings.

DeJoy, a top Trump donor and the former head fundraiser for the Republican National Convention, gave generously to Trump in 2016, and ambassadorships are frequently awarded to high-dollar donors. That practice is certainly not limited to the Trump administration, though it offers plenty of examples. Former Ambassador to the European Union Gordon Sondland, for instance, who became a key figure in the Ukraine impeachment scandal, was accused of having "bought" his position after he gave $1 million to Trump's inaugural committee.

Wos, though, may actually stand out as one of the more qualified among Trump's political appointees. In 2004, she was named ambassador to Estonia under former President George W. Bush. However, that appointment was dogged by the same pay-for-play questions as a result of DeJoy's major financial support of Bush ahead of the 2004 election. Wos filled the post for 18 months, or less than half of one presidential term.

This go around, the timing may suggest something beyond the cynical Washington norm of a campaign megadonor reaping a reward, campaign finance experts previously told Salon. DeJoy gave big to Trump's campaign and inauguration — and then he kept giving.

In June 2017, Trump named Kelly Craft — who along with her husband gave Trump's campaign efforts more than $2 million — as U.S. ambassador to Canada. Days before that announcement — on June 6 — DeJoy and Wos made twin donations to Trump Victory, of $100,000 and $2,700, respectively. (Wos' contribution was the maximum.) DeJoy, for his part, had not contributed to Trump since a $4,000 donation to Trump Victory in Oct. 2016.

In the end, Craft was named. She served until 2019, when on Feb. 22, Trump announced his intention to nominate her to replace former U.N. Ambassador Nikki Haley. Around that time, DeJoy significantly ramped up his giving to Trump Victory, FEC records show.

DeJoy and Wos each donated $35,000 to Trump Victory on Jan. 22, 2019, according to FEC filings. Following the Feb. 22 announcement that the Canadian ambassadorship would be open, DeJoy poured in hundreds of thousands of dollars, giving a total of $320,000 to Trump Victory in the space of three months, culminating in his largest single donation to the fund to date on June 17: $120,000. A few days later, Trump was said to be considering Wos for the position.

Trump, however, did not nominate anyone at the time, and Mills filled the position until the president moved him. DeJoy's $360,600 Trump Victory blitz ensued, culminating with Wos' nomination — which came well before DeJoy's appointment by the USPS Board of Governors.

The Republican-controlled Senate Foreign Relations Committee — chaired by the head of the NRSC, as previously Salon reported, whose colleagues include multiple beneficiaries of DeJoy's political giving, such as Lindsey Graham  — voted in favor of Wos this summer. Now, she awaits confirmation from the full Senate.

However, following a bombshell Washington Post report containing allegations that DeJoy had once run a criminal straw donor scheme, Democrats on the Senate Foreign Relations Committee announced a probe into the events surrounding Wos' nomination.

"Although it is not a surprise that a person nominated to serve as an ambassador is a large campaign donor, these donations are remarkably close in time with the nomination process," Kedric Payne, general counsel and senior director of ethics at the Campaign Legal Center, told Salon.

"Generally, you would expect an attempt to at least avoid the appearance of a quid pro quo with suspiciously timed contributions," Payne said. "This may strain the public's trust, to assume that the contributions during the nomination process are coincidences."