Phosphine gas, seen on Venus, is also produced by bacteria on Earth — but we don't know exactly how 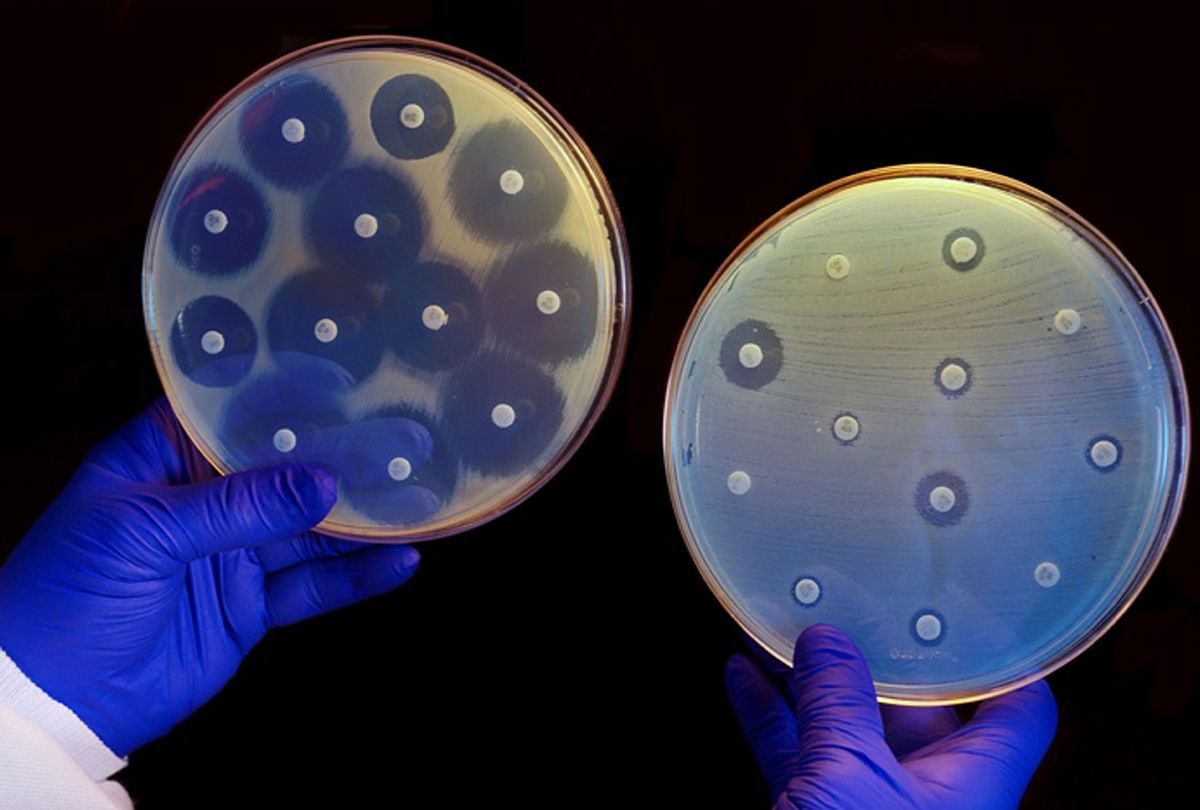 Antibiotics are placed in petri dishes filled with bacteria. In the dish on the left the bacteria will not develop near the antibiotics. In the right petri dish, antibiotic resistant bacteria are growing. (Universal History Archive/Universal Images Group via Getty Images)
--

The science world was rocked by the recent revelation that Venus could harbor simple life forms. In the relevant paper published in the journal Nature Astronomy on Monday, researchers detail their discovery that the upper atmosphere of Venus contains trace amounts of phosphine gas. On Earth, phosphine is believed to be created by anaerobic bacteria — meaning bacteria that live in environments without oxygen. Comparably, after three years of Venusian chemistry and geology research, the scientists were hard-pressed to find any explanation for how the phosphine ended up in Venus's atmosphere aside from the possibility of anaerobic life.

Phosphine, a simple molecule consisting of three hydrogen atoms and one phosphorus atom, is thought to be created by anaerobic bacteria on Earth. Thus, it can be detected emanating from sewers and from the gut bacteria inside us — among other dank, oxygen-rare environments.

But precisely how bacteria generate phosphine is still something of a mystery.

"We don't know if they are actually producing phosphine," Matthew Pasek, a professor of planetary science at the University of South Florida who specializes in "understanding the origin of life from the perspective of meteorites, metabolism, and phosphorus," told Salon. "There are suggestions they might, but it has not been proven. For anaerobic bacteria, there are sets of reactions they do perform, including turning other compounds into things like phosphine. They turn carbon dioxide into methane —  CO₂ to CH₄. They turn sulfate into sulfide, so SO₄ to H₂S."

He added, "There are all sorts of processes that do occur, and we have actually worked out the chemistry that that takes place with. There are sets of biological enzymes they use for that and everything like that. We do not have the same evidence for phosphine generation."

Pasek listed for Salon the things that scientists know for sure about phosphine gas: It is associated with very low oxygen environments (also known as anaerobic environments), associated with biology because "some sort of biological process is probably going on to do this" and is prevalent across a large group of environments, although the compound's abundance varies significantly from environment to environment.

"What we don't know is we don't know if microbes are actually making phosphine or if they're making some other compound that then turns into phosphine," Pasek explained. "And in the case of something else that turns into phosphine, the question then becomes: 'if you could make that something else first during non-biological processes, can you then skip the whole life argument?'"

Salon also reached out to some of the scientists who participated in the paper that revealed the presence of phosphine in Venus.

"This is not yet known, that is, the biochemical pathways have not been elucidated," Sara Seager, an astronomer and planetary scientist at the Massachusetts Institute of Technology who co-authored the recent paper, told Salon by email when asked about how anaerobic bacteria create phosphine. "We hope our findings will motivate people to work further on this."

Seager noted that "the evidence is extremely strong that phosphine is associated with life in oxygen-free environments."

This does not necessarily mean that there is life on Venus, Seager emphasized, as it is possible that unexplained processes in the Venusian atmosphere's chemistry could account for its presence there. Still, the scientists involved in the discovery paper spent several years attempting to find a non-biological explanation for the phosphine in Venus' atmosphere, and came up short.

Yet some kind of cloud-borne, phosphine-producing anaerobic bacteria in Venus' atmosphere would certainly not resemble similar bacteria on Earth. Seager says that there are no anaerobic organisms on Earth that live in conditions anywhere near comparable to those of Venus.

"The conditions in the Venusian atmosphere are 50 times drier than the driest place on Earth," Seager explained. "The acidic droplets are billions of times more acidic than the most acidic environment on Earth."

Helen J. Fraser, a co-author of the paper and professor in the astronomy division of the Department of Physical Sciences at The Open University in the United Kingdom, told Salon that it is not impossible for phosphine to be produced by non-living matter.

"On Earth, phosphine can result from natural processes such as lightning and volcanic activity, but only in small amounts," Fraser explained via email. "The only known processes that produce phosphine on Earth in similar quantities are biological in origin."

She added, "What's exciting is that this is the first detection of a possible sign of life for which we have no plausible alternative explanation. That doesn't mean that there definitely is life, as we could be missing some other method of producing phosphine in the required amounts, but it's a very exciting possibility which needs more investigation."

Venus is not the only planet in our solar system that has traces of phosphine. Significant quantities of the gas have also been detected in Jupiter and Saturn, but there are non-biological reasons that explain its presence on gas giants, as those planets have hot, high-pressure interiors that create the gas and then force it to the surface through a process known as convection.

Yet such conditions and constituent chemicals do not exist to a sufficient degree on a rocky planet like Venus to explain its presence there through geochemistry.

"We have searched all the ways that we can think of and can calculate — reactions between gases in the atmosphere, gases and dust, clouds and dust, reactions caused by the Sun's UV light," William Bains, an astrobiology expert and professor at the Massachusetts Institute of Technology, told Salon by email. "None of them can explain the discovery. So I think the presence of phosphine is pretty clear, and that we do not know why it is there is compelling. But there is a lot we do not know. What our papers are trying to get across is that a) phosphine is there, b) we do not know why, but c) on Earth phosphine is uniquely associated with life, so we should include life in any list of possible explanations."