More Giuliani mystery: He created two unknown companies amid his work for Trump in Ukraine

Giuliani launched both a communications company and a personal law firm last year. We think he only had one client 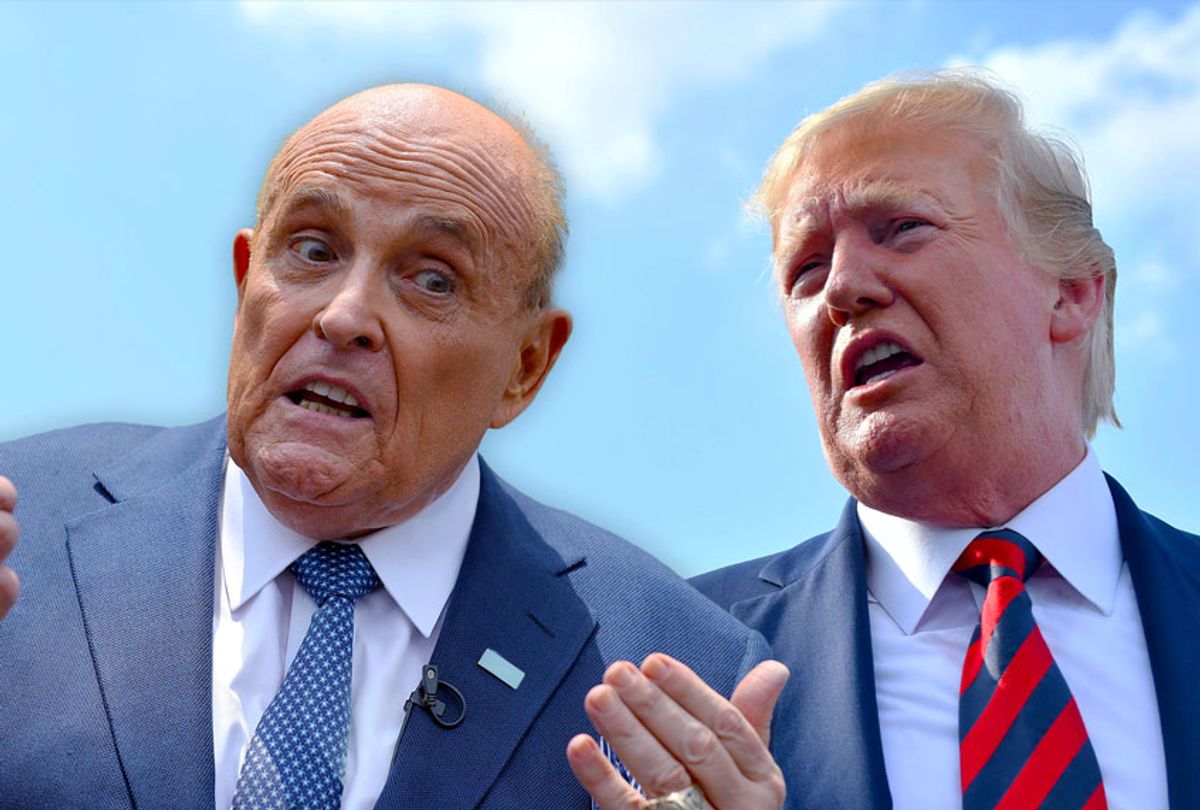 Rudy Giuliani, President Trump's personal attorney, has told Salon that he created two new companies last year amid his work on Trump's behalf trying to dig up damaging information on Joe Biden in Ukraine. The purpose of the companies, especially that of Giuliani's brand new one-man law firm — as well as their possible connections to the president — is somewhat unclear.

According to New York records, one of the companies, first called Giuliani Media and now known as Giuliani Communications, was created in November, just before Giuliani traveled to Ukraine with a production crew from One America News Network (OAN).

During that trip, Giuliani interviewed Ukrainian lawmaker Andrii Derkach, who was recently sanctioned by the U.S. Treasury Department as an "active Russian agent," for material included in a documentary later aired on OAN. Giuliani released his interview with Derkach a few months later.

Although the existence of Giuliani Communications has not been previously reported, its creation lines up with reports at the time that Giuliani planned to create a podcast aimed at defending Trump from the impeachment narrative. He eventually launched that podcast, which airs regularly, and has conducted video interviews as well — including the one with Derkach. For unclear reasons, Giuliani changed the company name to Giuliani Communications in March 2020, the same month he released his Derkach interview.

Giuliani's other new company is his personal law firm, Rudolph W. Giuliani PLLC, which was created in June 2019, according to New York records. The existence of the company has only been mentioned in an October 2019 report from Roll Call. Giuliani told Salon that he had set up the firm because a client of his wanted money put in escrow.

"I didn't want Giuliani Partners to do it, because I know the ethical rules," Giuliani said, but declined to name the client or to explain the potential ethical problems further. "I'm just a country lawyer," he added.

"The question is what the client hired Giuliani to do," Brett Kappel, top authority on lobbying and government ethics law, told Salon. If the client had hired Giuliani to provide legal advice, Kappel explained, or to "represent him in litigation or a negotiation where an exchange of money was contemplated," then Giuliani would be required to place any funds entrusted to him by the client in an escrow account separate from the law firm's funds. The former New York mayor's consulting business, Giuliani Partners, "isn't a law firm and isn't subject to the same ethical requirements," Kappel said.

That raises the intriguing question of why Giuliani had not set up a personal law practice until he got this specific request from this specific client. Although attorneys can represent clients without forming a firm, a PLLC shields the owner from liability.

At the time Giuliani formed his PLLC, he had already been representing Trump as his personal attorney for more than a year. He also claims to have represented Lev Parnas and Igor Fruman, with whom he also struck up a business arrangement in 2018. Parnas and Fruman later ran political errands for Giuliani in Ukraine.

On the day Giuliani set up his personal firm, he seemed to have Ukraine on the brain, tweeting, "New Pres of Ukraine still silent on investigation of Ukrainian interference in 2016 election and alleged Biden bribery of Pres Poroshenko. Time for leadership and investigate both if you want to purge how Ukraine was abused by Hillary and Obama people."

That same month, according to the Washington Post, Giuliani began doing consulting work for Luis Abinader, a presidential candidate in the Dominican Republic. It is not clear whether he also did legal work for Abinader.

A few days later, Giuliani he took a trip with Parnas to London that lasted several days, during which Giuliani met with Venezuelan financier Alejandro Betancourt, who is currently the subject of a major money laundering investigation in the U.S. Giuliani later took on Betancourt as a client, and spoke on his behalf to Justice Department prosecutors in September.

Giuliani told Salon in a previous phone conversation that Parnas was his client during a trip the two took to Madrid in July 2019, when he met with top Ukrainian foreign policy official Andriy Yermak (who subsequently became chief of staff to President Volodymyr Zelensky). Giuliani made the claim about representing Parnas when he was asked about his meeting with Yermak, explaining that attorney-client privilege barred him from discussing details of their conversations. Parnas' current attorney has denied that Giuliani was representing Parnas at that time.

Giuliani claims to have done all his work for Trump free of charge, though the president has never publicly acknowledged that. Giuliani's work on Trump's behalf ultimately led to the president's impeachment.

"Trump did not disclose on his financial forms, as required, that he was taking pro bono counsel from Giuliani," Jordan Libowitz, of the government watchdog Citizens for Responsibility and Ethics in Washington, told Salon. Trump has alleged that "there's no way of assessing the value of Giuliani's work," Libowitz said, "even though it is his responsibility to keep track of it."

Giuliani disclosed the previously unknown companies in a conversation with Salon about another previously unreported company that he created in 2002 and which received taxpayer-backed emergency loans this spring. Salon's investigation of the company offered new insight into Giuliani's arcane business arrangements, which are reportedly the subject of subpoenas from federal investigators in the Southern District of New York. Experts told Salon that the company's loan application raises questions of bank fraud, a felony.

Matt Sanderson, a top FARA law attorney, told Salon that despite reams of reports, and Giuliani's history of peddling known Russian disinformation about both Joe Biden and his son Hunter, there isn't enough public information to determine whether Giuliani's work in Ukraine would qualify him, or OAN, as foreign agents.

"We would have to know if anyone acting on behalf of foreign interests, especially someone tied to the government, paid for or directed that work," Sanderson said.

OAN, as a U.S. media company, is exempt from registering as an agent. Sanderson, however, pointed to a recent episode involving former CNN host Larry King, who conducted a blatantly unethical interview with Russian journalist Anastasia Dolgova that was filmed in two parts: King's scripted questions, and then Dolgova's answers.

King's exposure, Sanderson told ProPublica, might hinge on whether he was "acting in his capacity as a member of the news media," or was "doing an infomercial where he's paid specifically to do the interview." The same might apply here to OAN, Sanderson said.

Trump has often spoken glowingly of OAN — which has positioned itself significantly to the right of Fox News and has frequently spread even more blatant misinformation — as a preferred alternative. The president promoted the network's Ukraine coverage several times on Twitter, including a Chanel Rion interview with former Ukrainian prosecutor Yuriy Lutsenko, during which Giuliani was present at the table.

Giuliani's interview with Andrii Derkach is no longer available on OAN's site, and all stories in which "Derkach" is tagged have been removed. OAN president Charles Herring previously told Salon that the network's website automatically deletes older content, but there are indications that the Derkach material was deliberately removed. One story in which his name was misspelled as "Derkash," for instance, was not deleted.

Giuliani did not reply to Salon's questions about whether he had charged or expensed any of his Ukraine-related activity on President Trump's behalf to either Giuliani Communications or Rudolph W. Giuliani PLLC.