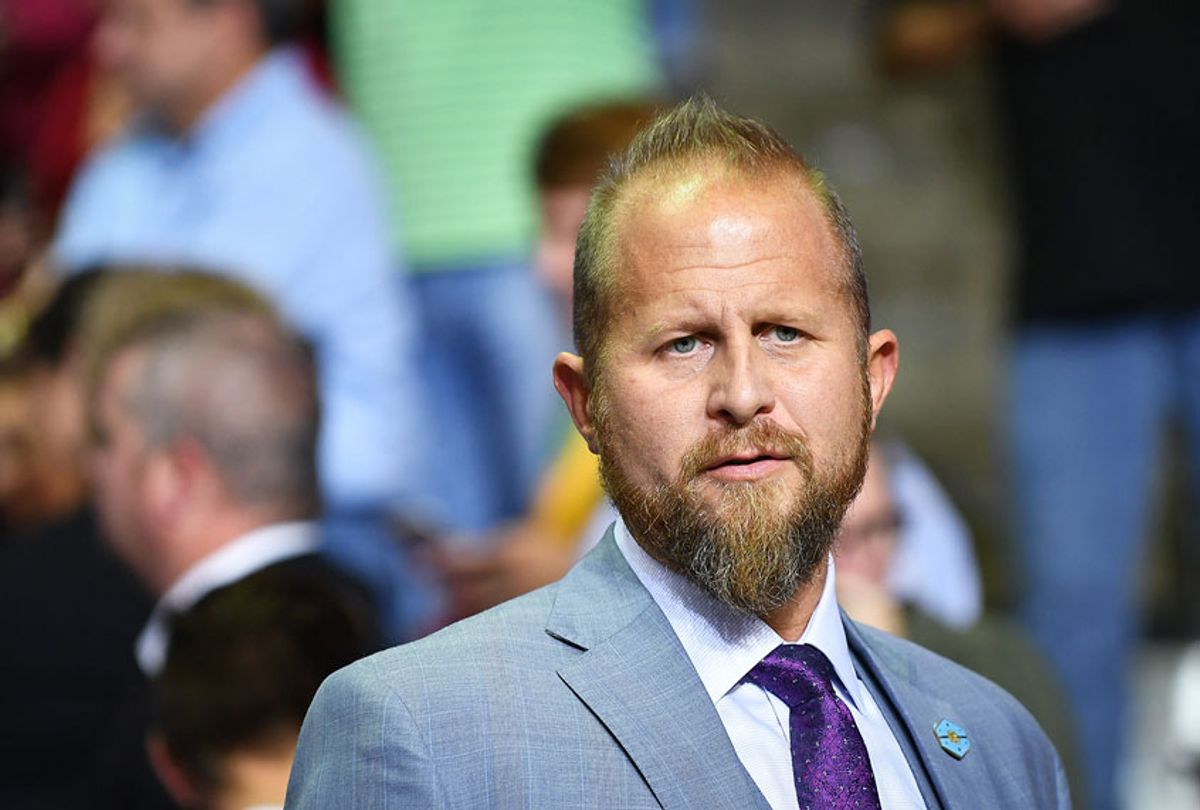 Police reportedly confiscated 10 guns from the Florida home of Brad Parscale, President Trump's former campaign manager, after Parscale's wife told them he was exhibiting suicidal behavior and had loaded a handgun during an argument on Sunday.

Body-cam footage of the scene, released Monday, shows Parscale's wife telling a responding officer that Parscale had been "acting crazy" and "irate," and had "cocked a handgun." She said that after she left Parscale alone to "give him space," she "heard a loud boom."

Parscale, whom Trump demoted in July amid criticisms of incompetence and self-dealing, had to be taken by force, according to body-cam footage and police reports. One report describes large bruises on Candice Parscale's arms and face. When asked about those, she told a responding detective that her husband hits her.

Police confronted Parscale in his driveway, shirtless with a beer in his hand, and tackled and handcuffed him, according to body-cam video and incident reports. "I initiated a double leg take down," one of the responding officers wrote, adding that the 6'8" Parscale, who appeared calm in the video, did not immediately comply with commands to get on the ground, which the footage appears to substantiate.

"I didn't do anything," Parscale can be heard repeating, as police handcuff him on the ground.

The tone captured in the video and police reports from the scene, first publicized Monday by the Miami Herald, stands in stark contrast to official statements on Sunday, such as from Fort Lauderdale Police Chief Karen Dietrich, who said, "We went out and it was very short. We went and got him help."

Detective Steven Smith's report describes large bruises on Parscale's wife's arms and face: "While speaking with [Candice] Parscale I noticed several large sized contusions on both of her arms, her cheek and forehead. When I asked how she received the bruising, [Candice] Parscale stated Brad Parscale hits her."

Candice Parscale told officers that while her husband had not hit her on Sunday, Brad Parscale had knocked her phone out of her hand when she attempted to call his father. She told police that Parscale had recently talked about shooting himself, and that she had heard what might have been a gunshot — "a loud boom" — from inside the house. Later she said the sound could have been a car backfiring.

"[Candice] immediately fled residence and stated she heard a loud bang shortly after," wrote one of the first responding officers. "[Candice] stated that they realized that Bradley did not shoot himself when they heard Bradley ranting and pacing around the residence and the dog barking frantically. However, they were concerned that Bradley might still try to shoot himself, due to him being in possession of several firearms and refusing to vacate the residence."

News reports first placed Parscale on the chopping block in late April, when an irate Trump reportedly threatened to sue him in a profanity-riddled phone call after internal polls showed the president in a deep deficit to presumptive Democratic nominee Joe Biden. Trump eventually demoted Parscale in July, amid budget woes and a disastrous series of events surrounding Trump's June 20 "comeback rally" in Tulsa, Oklahoma — Parscale had bragged publicly about "one million" ticket requests for the sparsely attended event, and it was later revealed that thousands of fans of Korean pop music had trolled him online by artificially inflating registration numbers.

Salon first reported last week that Parscale appears to have taken a $15,000 pay cut with his demotion.

Parscale had reportedly rankled Trump in other ways, including apparently cashing in on his position by contracting out tens of millions of dollars in campaign business to other companies he owned. Earlier this year he was reported to have been making secret payments to Kimberly Guilfoyle and Lara Trump, the romantic partners of the president's two adult sons. A campaign finance watchdog filed a federal complaint alleging that the campaign under Parscale used shell companies to cover up the recipients of more than $170 million. Ed Rollins, a veteran Republican strategist who currently runs a pro-Trump super PAC, accused Parscale of spending "like a drunken sailor."

The New York Times reported earlier this year that "During a campaign appearance last summer in Orlando, Ms. Guilfoyle confronted Mr. Parscale: Why were her checks always late? Two people who witnessed the encounter said a contrite Mr. Parscale promised that the problem would be sorted out promptly by his wife, Candice Parscale, who handles the books on many of his ventures."

"Brad Parscale is a member of our family and we all love him," campaign spokesperson Tim Murtaugh said in a statement Sunday. "We are ready to support him and his family in any way possible. The disgusting, personal attacks from Democrats and disgruntled RINOs have gone too far, and they should be ashamed of themselves for what they've done to this man and his family."

Following the new reports and allegations of domestic violence, Murtaugh told Salon in a statement, "Our thoughts are with Brad and his family as we wait for all the facts to emerge."

A number of men in Trump's orbit, including the president, have a history of allegations of abuse and domestic violence. Among them are former campaign CEO and White House strategist Steve Bannon, former campaign manager Corey Lewandowski, former senior White House adviser Rob Porter and Trump himself.