Trump is scared sh**less: He can't handle the truth, so he wouldn't let Biden talk

Trump's no strongman: He's a coward who listens to no one and hides behind the fascists he urges to "stand by" 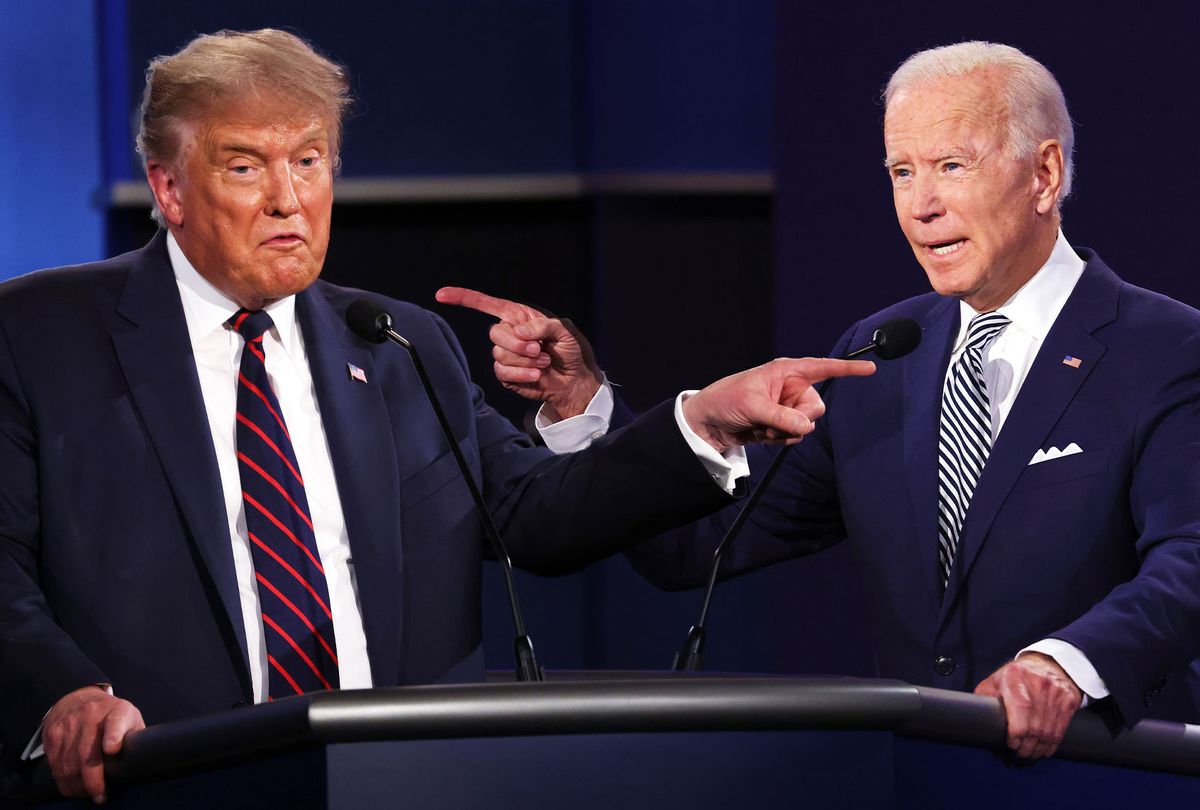 Forget the euphemistic language being used by much of the mainstream press to describe Tuesday night's presidential debate between Donald Trump and former Vice President Joe Biden. That wasn't a "contentious debate," nor were the candidates "bickering." No, Biden showed up to do normal politician things, only to find himself trapped on stage with Trump, a shit-flinging monkey whose only purpose was to prevent anything resembling truth from slipping through and touching the ears of the public.

For an hour and a half, the same thing kept happening over and over. (And over, and over.) Biden would try to talk, about literally anything — Trump's failures, his own policy ideas, the state of the nation, hell, possibly the weather — and Trump would immediately interrupt the second he heard a truth about to be stated, ranting over Biden and silencing any factual information or expression of decency under a blanket of lies and vitriol.

Trump and his supporters no doubt imagine that his performance was a triumphant display of animalistic dominance. But like all bullies, their posturing is a thin disguise for the cowardice underneath. What was really on stage was a man so incredibly terrified of being held to account, even a little, and so fearful of the facts that he lashed out like a cornered rat at even the barest hint that his opponent might say things that are true.

Trump lied about everything: Health care, the coronavirus, mail-in ballots, the economy, jobs, policing, Black Lives Matter protests and on and on.

It would certainly be easier to list the things he didn't lie about.

Unfortunately, that list has only one item on it: Trump was entirely sincere about his unwillingness to condemn white supremacists and right-wing militias. We can go ahead and trust Trump was telling the truth when he asked such groups to "stand by," building on his already extensive history of encouraging armed far-right militants to use violence and intimidation to help him steal the election.

(These groups heard Trump loud and clear, and are celebrating Trump's support for their violent desires.)

It is customary for post-debate takes to focus on the question of who "won" the debate. In this case, that's a little like trying to determine who "won" a football game where one team showed up to play and other team set fire to the field, tore off their jerseys, and ritually sacrificed kittens while howling at the moon.

To be certain, Biden has a real talent for not suffering fools gladly, when he chooses to use it. He famously deployed this skill in the 2012 vice presidential debate against Paul Ryan, deliciously wiping that smug expression off Ryan's face repeatedly throughout the night. After a shaky start, Biden dug in and found that part of his personality again Tuesday, smiling condescendingly at the raving Trump and repeatedly calling out Trump's monkey act for what it was.

"Will you shut up, man? This is so unpresidential," he zipped.

"Maybe you can inject some bleach into your arm," he quipped.

"It's hard to get any word in with this clown, excuse me, this person," he zapped.

The zingers were scripted and rehearsed, of course — the T-shirts went on sale immediately — but that didn't diminish their impact, since anyone with a shred of remaining decency left fiercely agreed with the sentiments. Still, contempt usually works its magic by triggering shame in its target. That's how it worked on Ryan in 2012, leaving him sputtering in the face of Biden's ridicule.

Trump, however, is shameless. There was little Biden could do to staunch the flow of lies and nonsense.

What came to mind instead is the famous Disney cartoon "The Sorcerer's Apprentice." Biden was in the role of Mickey Mouse, and the more he tried to stop the deluge of lies pouring from Trump's pinched and sneering mouth, the more the bullshit flowed.

It was overwhelming, and frankly triggering for anyone who has residual trauma from being abused or bullied. I'm usually pretty calm watching these live political events, pouring my thoughts into Twitter or in snarky remarks on Salon's internal Slack channel. But I found myself losing control, yelling, "SHUT UP" in response to Trump's grating voice, a mixture of fingernails on the chalkboard and cats fighting, as he poured out another bucket of lies.

Understandably, some pundits are calling for the future debates in this series to be canceled, especially if Trump keeps using them to encourage right-wing militias to get ready for violence. (There's a vice-presidential debate betwen Mike Pence and Sen. Kamala Harris scheduled for next week, and two more Biden-Trump debates before the end of October.)

There can be little doubt that Trump's behavior is not helpful for his campaign. There's a significant chunk of would-be Trump voters who want to imagine themselves as good people, and he's doing absolutely nothing to bolster their delusions. Even "Fox & Friends" co-host Brian Kilmeade complained that Trump didn't do the bare minimum of pretending to condemn white supremacists, suggesting that Trump's propagandists understand this isn't a good look for him.

Of course, that concern is rapidly being overtaken by the "Dear Leader" impulse on the right. The diligent atrocity-documenters of at Media Matters spent Wednesday morning collecting examples of Fox News commentators defending white supremacists and other far-right militants, and accusing "antifa" of being the engine of violence. In reality, of course, the majority of shootings and all the car attacks at protests — including the shooting of three men in Kenosha, Wisconsin, that left two dead — have been at the hands of those right-wing extremists Fox News and Trump keep claiming are heroes.

Understandably, a lot of liberal viewers saw Trump's display last night and freaked out. And yes, it is legitimately scary, and emotionally overwhelming, to have a man who is legally the president of the United States acting like an imperious bully who shouts down criticism and encourages armed men to use violence to suppress dissent. (And here I thought the right was against "cancel culture"!) Again, if you've ever been the victim of abuse or a hate crime, it's hard to watch Trump act out like that without feeling a powerful, involuntary reaction.

What's critical to understand here, however, is that none of this is the behavior of a man who thinks he's winning. Trump is lashing out because he knows he's a failure and a loser, and he's trying to hold that truth at arm's length with a torrent of lies and violent threats. He's resorting to drastic measures because he's lost control of the situation. He knows Americans want to throw him out — leaving him to face possible criminal charges and bankruptcy — and he's panicking. He's threatening people and making false fraud allegations because he wants people to give up on voting, as he knows that's how they can drive him out.

Trump is a coward who uses bullying and threats to conceal his fear. He can be defeated, if people see him for what he is.

As Barack Obama said at the Democratic National Convention last month: "Don't let them take your power from you." Thirty-four days to go.