"I don't know who the Proud Boys are," Trump claims after refusing to denounce the group at the presidential debate 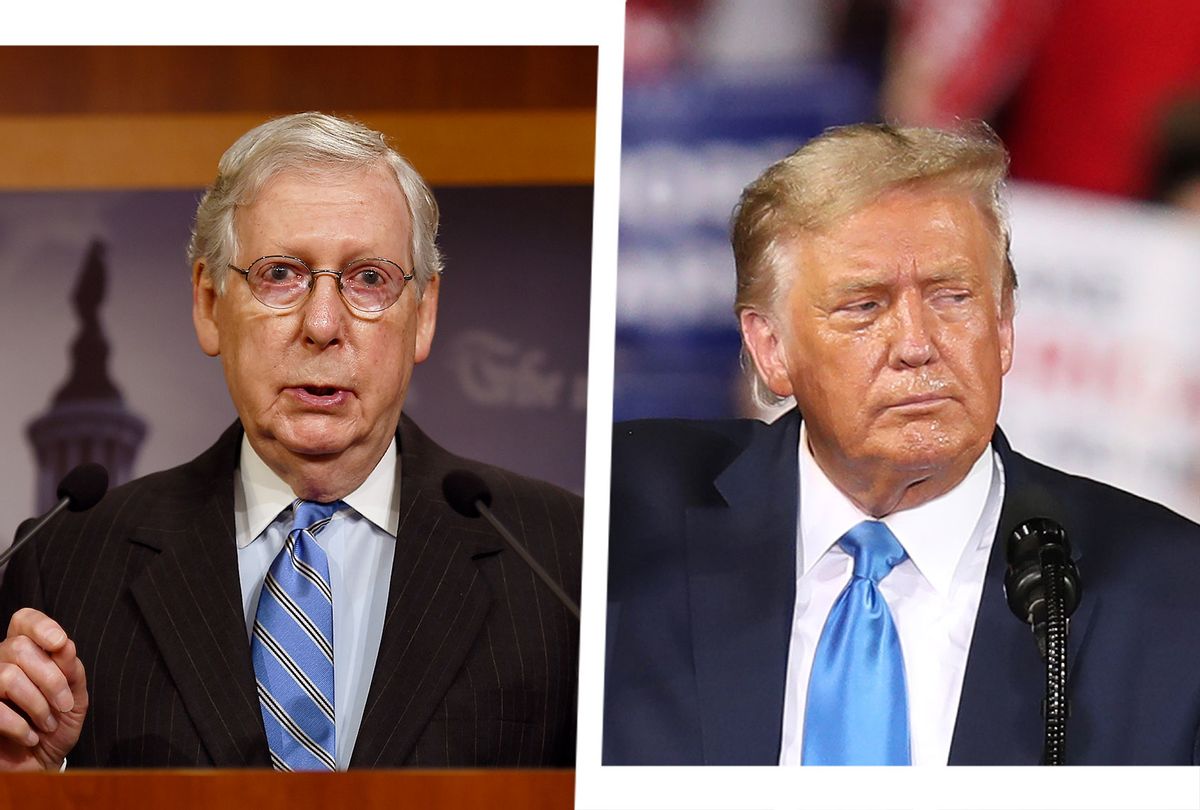 President Donald Trump faces backlash from fellow Republicans after refusing to condemn white supremacy during a contentious moment in the first debate of the 2020 cycle against Democratic rival Joe Biden.

Though Trump told debate moderator Chris Wallace of Fox News that "sure" he would be willing to condemn white supremacist groups, he failed multiple times to do so. When asked if he would denounce the Proud Boys, which was labeled a hate group by the Southern Poverty Law Center, the president told its members to "stand back, and stand by."

"Somebody's got to do something about antifa and the left," Trump declared.

In a rare rebuke of Trump, Senate Majority Leader Mitch McConnell, R-Ky., told reporters on Wednesday that the president's failure to denounce white supremacy was "unacceptable." The GOP leader aligned himself with Sen. Tim Scott, R-S.C., the only Black Republican in the upper chamber, who had earlier called for Trump to "correct" his answer.

"With regard to the white supremacy issue, I want to associate myself with the remarks of Sen. Tim Scott," McConnell said. "I think he said it exactly correctly, and that's exactly how I would express myself on that issue."

"[Scott] said it was unacceptable not to condemn white supremacists, and so I do so in the strongest possible way," McConnell added.

Scott posited in his earlier remarks that Trump might not have spoken clearly, and the senator extended the president an opportunity to clarify his answer.

"I think he misspoke. I think he should correct it,"  the Palmetto State Republican said. "If he doesn't correct it, I guess he didn't misspeak."

A number of Senate Republicans made similar requests on Wednesday.

Even the co-host of "Fox & Friends," the president's favorite morning show which frequently showers him with the praise, expressed bafflement. Brian Kilmeade lamented that Trump "blew the biggest layup in the history of debates by saying – not condemning white supremacists." He also requested clarification from the president.

"I don't know if he didn't hear it, but he's got to clarify that right away," Kilmeade said of Trump. "That's like, 'Are you against evil?' Why the president didn't just knock that out of the park, I'm not sure."

But White House communications director Alyssa Farah told Fox News' Sandra Smith that the administration did not see a need to clear up the matter.

"I don't think that there's anything to clarify," Farah said. "He's told them to 'stand back.'"

Trump campaign chief strategist Jason Miller responded to questions from USA Today by pointing out that Trump had recently promised to designate the Ku Klux Klan a terrorist organization as part of what the president calls his "Platinum Plan" for Black voters. However, there is currently no legal process for designating domestic groups as terrorist organizations.

Miller also said that Trump had been telling the Proud Boys to "knock it off," even though the group's own leaders publicly celebrated "stand back and stand by" as an activating order.

In a testy exchange with CNN's John Berman, Trump campaign spokesperson Hogan Gidley falsely claimed that the president "did call them out." When Gidley claimed that Trump had denounced white supremacists three times, Berman responded: "The president said, 'Yes, I will' . . . and then the president didn't do it."

Reporters gave Trump a chance to clarify his answer in a Wednesday afternoon press spray, during which he claimed to not "know who the Proud Boys are."

"Whoever they are, they have to stand down," the president added.

"I've always denounced any form — any form, any form of any of that you have to denounce," he claimed.

Then the president then called on Biden to denounce antifa.

In 2017, the president responded to a violent white nationalist rally in Virginia — an event organized by former Proud Boys member Jason Kessler — by saying, "There's blame on both sides."