New Trump-Pence campaign logo, seemingly borrowed from overt racists, is another in a long line of "coincidences" 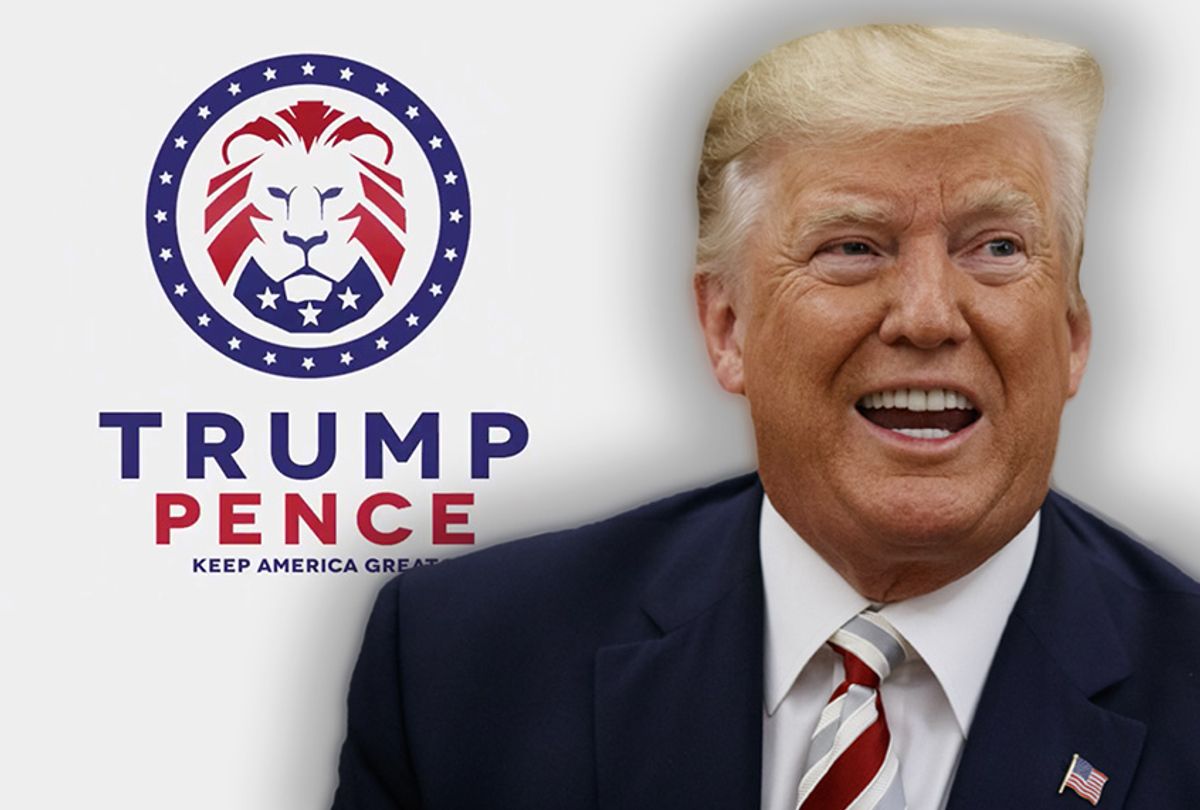 Oh boy, it's time for another round of Let's Pretend the President Isn't Air-Kissing White Nationalists. This time, the instigating incident is the discovery that a fan video tweeted by Donald Trump featured a logo — a lion's face built out of red stripes and blue stars — that was apparently, um, "borrowed" from a white supremacist group so unhinged that it managed to get banned from Twitter, a site that is always reluctant to boot fascists.

Mediaite has a detailed account of the internet sleuths, including Brooke Binkowski, formerly of Snopes, who pieced together the apparent source of this lion logo. It has been used by the white supremacist site VDare, which also happens to be the same site whose articles the Department of Justice recently forwarded to immigration court employees, launching a minor scandal. The logo has been traced back to a pro-Trump fascist group called the "Lion Guard."

The group's name, and apparent ethos comes from a quote from Benito Mussolini that Trump approvingly tweeted in 2016: "It is better to live one day as a lion than 100 years as a sheep."

Back then, Trump claimed it was an accident born of ignorance that he approvingly quoted Mussolini, just as the DOJ claims it was an unfortunate accident that it mailed out links to white supremacist sites. That's the strategy in play: Wink at the fascists, and whenever you get called out on it, play innocent.

"White Supremacists are a key constituency for Trump. His campaign has determined that they can't win in 2020 without them," Melissa Ryan, a digital strategist dedicated to fighting right-wing extremism, tweeted in response to Trump's new lion logo. "Stuff like this is how the Trump campaign can show alignment but give themselves room to pretend it's accidental if they're called on it."

We've also been assured it was an accident or miscommunication whenever Trump associates flash a hand gesture popular with white nationalists. And when Trump hosted a hornet's nest worth of racists, right-wing extremists and conspiracy theorists at the White House, that was because he supports "free speech" and not because he totally agrees with such people.

We were also told that Trump didn't mean it when he repeatedly tweeted propaganda from white nationalist groups. It's just an accident when he says overtly anti-Semitic things. We're meant to believe, seemingly, that the president is repeatedly victimized by white nationalists, who exploiting his garden-variety racism to get him to signal-boost their ideology. Is that supposed to make us feel better?

We're also meant to believe it's just coincidence that Trump eagerly promotes the talking points offered by fascists that falsely blame the left for street fights that were actually instigated by hate groups. We're meant to believe that Trump is merely a bumbling fool and not a deliberate promoter of fascism when he repeatedly echoes white nationalist claims that "both sides" do it and that "antifa" is the real problem, instead of facing the fact that actual white nationalists have been behind multiple terrorist attacks over the past four years.

The fan site that made the video is, of course, claiming innocence, saying that logo — lovingly animated in the video — was simply pulled off Google. That is fairly difficult to believe, since a search for "Trump logo" doesn't have any lion iconography, except for those sites that are reporting on the video.

A whole lot of mistakes and coincidences are piling up to explain how often Trump's aesthetics, beliefs, attitudes and talking points align so nicely with the stuff being churned out by all the formerly-fringe white nationalist groups out there. And we're meant to believe that Trump's policies, which sure do seem to be geared towards shipping out as many nonwhite people, have no relationship to the white nationalist mission of turning the U.S. into a white ethno-state.

Trump and his associates feign innocence and write off the white supremacist signaling as accidents or coincidences not simply to escape accountability for what they're doing. A whole lot of this is also about trolling the left.

Whenever progressives publicly notice, say, that Trump is using a logo borrowed from fascist organizations for his campaign, they are immediately accused of imagining things and of being conspiracy theorists. (In reality, Trump himself is a conspiracy theorist who promotes other conspiracy theorists, such as QAnon.) We're told, no matter how many times Trump "accidentally" promotes white nationalism, that he should forever be extended the benefit of the doubt, and not doing so makes one "crazy."

That's why the term "gaslighting" is so perfect to describe Trump's favored propaganda style. Gaslighting isn't just about telling people they can't trust the evidence of their own eyes. It's about painting people as "crazy" and, if possible, convincing them to doubt themselves as well.

Unfortunately, this strategy works pretty well, because there's a strong amount of social pressure to ignore problems that we had all previously believed were unthinkable in 21st-century America.

In June, Masha Gessen wrote a profound essay at the New Yorker about how the belief that something is "unimaginable" translates directly into denial when the unimaginable becomes our lived reality.

"If this can’t happen, then the thing that is happening is not it," Gessen wrote. "What we see in real life, or at least on television, can’t possibly be the same monstrous phenomenon that we have collectively decided is unimaginable."

It is unimaginable to many that a monster like Trump could really be president. So when he was elected, a lot of people decided that "Trump was not the catastrophe so many of us had assumed he would be" and that "he had been secretly Presidential all along or was about to become Presidential."

So the same thing is going on with Trump's repeated signaling of his affiliation with white nationalism. Even though he keeps "accidentally" swiping logos from fascists or retweeting white nationalist propaganda or inviting extremists to the White House, it is hard for most Americans, especially journalists, to believe the evidence of their own eyes. It's unimaginable that an American president would do such a thing, so it's easier to ignore it or minimize it than to look at what is happening in front of our eyes.

Trump is so bad — so racist, so corrupt, such a bully, such a pig — that merely describing what he's doing makes a person sound crazy. So instead of doing that, we minimize and ignore the real situation.

But the simplest explanation for why Trump — who has been a racist his whole life and who is running concentration camps on the border — keeps winking at white nationalists in public is not that he keeps innocently slipping up time and again. It's because, as his policies show, he agrees with the white nationalist agenda. It's that he's doing this on purpose. There is no longer any reason, and has never been any real reason, to give Donald Trump the benefit of the doubt.