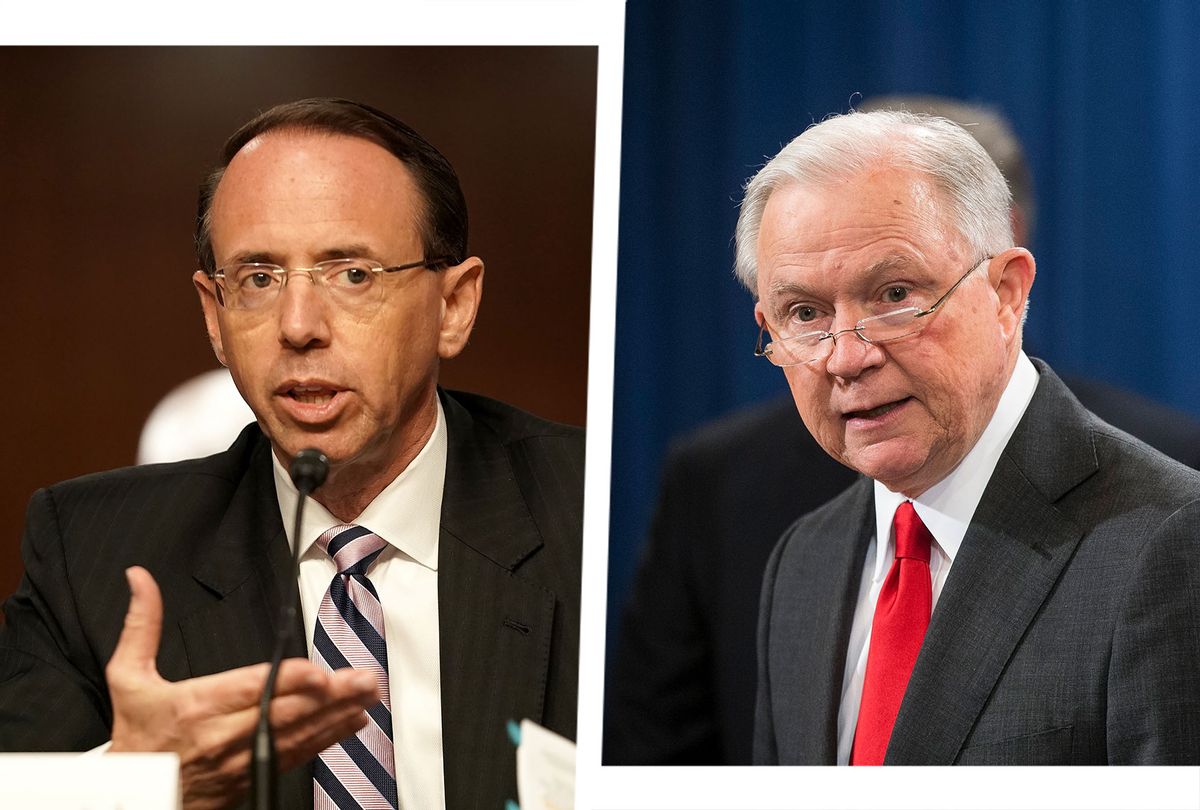 Former Attorney General Jeff Sessions and his deputy, Rod Rosenstein, were a "driving force" behind the Trump administration's child separation policy despite repeated denials, according to a draft Department of Justice inspector general report obtained by The New York Times.

Trump administration officials have repeatedly denied that there was any policy of separating families at the border, and Sessions claimed in 2018 that the administration "never really intended to do that." But an investigation by Inspector General Michael Horowitz found that Sessions and Rosenstein directly ordered prosecutors to separate children from their families — no matter how young they were.

"We need to take away children," Sessions told five U.S. attorneys in 2018 after they expressed they were "deeply concerned" about the welfare of the children, according to participants' notes. If the parents "care about" their kids, "don't bring them in," Sessions went on to say, according to the report.

Texas U.S. Attorney John Bash, who declined to bring the cases before he was "overruled" by Rosenstein, told staff after the call that "those two cases should not have been declined."

"Per the A.G.'s policy, we should NOT be categorically declining immigration prosecutions of adults in family units because of the age of a child," he wrote.

The report makes it clear that the administration's denials were false, and Justice Department prosecutors encouraged the separation of children.

"The A.G.'s goal," Rosenstein told investigators, "was to create a more effective deterrent so that everybody would believe that they had a risk of being prosecuted."

"It is the hope that this separation will act as a deterrent to parents bringing their children into the harsh circumstances that are present when trying to enter the United States illegally," a Border Patrol official wrote to a Justice Department attorney in 2017.

DOJ officials have also repeatedly claimed that they believed children would be reunited with parents within a matter of hours — not days or months. But the investigation uncovered an internal memo noting that average sentences for adults prosecuted for misdemeanors for crossing the border illegally ranged from three to 14 days.

"We found no evidence, before or after receipt of the memorandum, that D.O.J. leaders sought to expedite the process for completing sentencing in order to facilitate reunification of separated families," the draft report says, adding that Sessions and top officials "were aware that full implementation of the zero-tolerance policy would result in criminal referrals by D.H.S. of adults who enter the country illegally with children and that the prosecution of these family-unit adults would result in children being separated from families."

The administration separated thousands of children from their families, sometimes for months at a time, before Trump ended the policy amid worldwide condemnation. Despite ending the policy, the government has still been unable to reunite all of the children years later.

Sessions has tried to distance himself from the policy, allowing Trump and the Department of Homeland Security to shoulder the blame, even though he announced the "zero tolerance" policy himself.

"The department's single-minded focus on increasing prosecutions came at the expense of careful and effective implementation of the policy, especially with regard to prosecution of family-unit adults and the resulting child separations," Horowitz's draft report said.

Sessions refused to be interviewed for the investigation. Rosenstein, who stepped down in May 2019, submitted a 64-page response defending himself.

"If any United States attorney ever charged a defendant they did not personally believe warranted prosecution, they violated their oath of office," he said in a statement, according to The Times. "I never ordered anyone to prosecute a case."

The report details repeated concerns raised by prosecutors over the policy. In one case, prosecutors were alarmed over a secret 2017 pilot program in Texas.

"We have now heard of us taking breastfeeding defendant moms away from their infants," one prosecutor wrote to a superior. "I did not believe this until I looked at the duty log."

The report also found that Border Patrol officers missed serious felony cases, because they were too focused on enforcing the policy. One Texas prosecutor warned Justice Department officials that "sex offenders were released" as a result. U.S. Marshals were also forced to cut back serving warrants in other cases.

Despite pushing for the separations, top Justice Department officials rejected responsibility for tracking the children.

"I just don't see that as D.O.J. equity," Rosenstein wrote.

Despite the report's findings, the Justice Department still denies that it was responsible for the policy, pointing the finger at the Department of Homeland Security.

"The draft report relied on for this article contains numerous factual errors and inaccuracies," Justice Department spokeswoman Alexa Vance told The Times. "While D.O.J. is responsible for the prosecutions of defendants, it had no role in tracking or providing custodial care to the children of defendants. Finally, both the timing and misleading content of this leak raise troubling questions about the motivations of those responsible for it."

Rep. Joyce Beatty, R-Ohio, who sponsored a bill to end the policy, called the administration "heartless" and "cruel" in response to the report.

"This policy to rip children away from their parents was heartless and disgusting. It was also illegal," Virginia Attorney General Mark Herring, one of the state AGs who sued the administration to stop the policy, said.

"There must be accountability for this," Sherrilyn Ifill, the president of the NAACP Legal Defense and Educational Fund, said. "A deliberate and cold-blooded mass human rights violation."