Wishing Donald Trump well: It's just another way of normalizing the regime

We're expected to wish Trump a full recovery just because he's the president. But he's done nothing to earn that 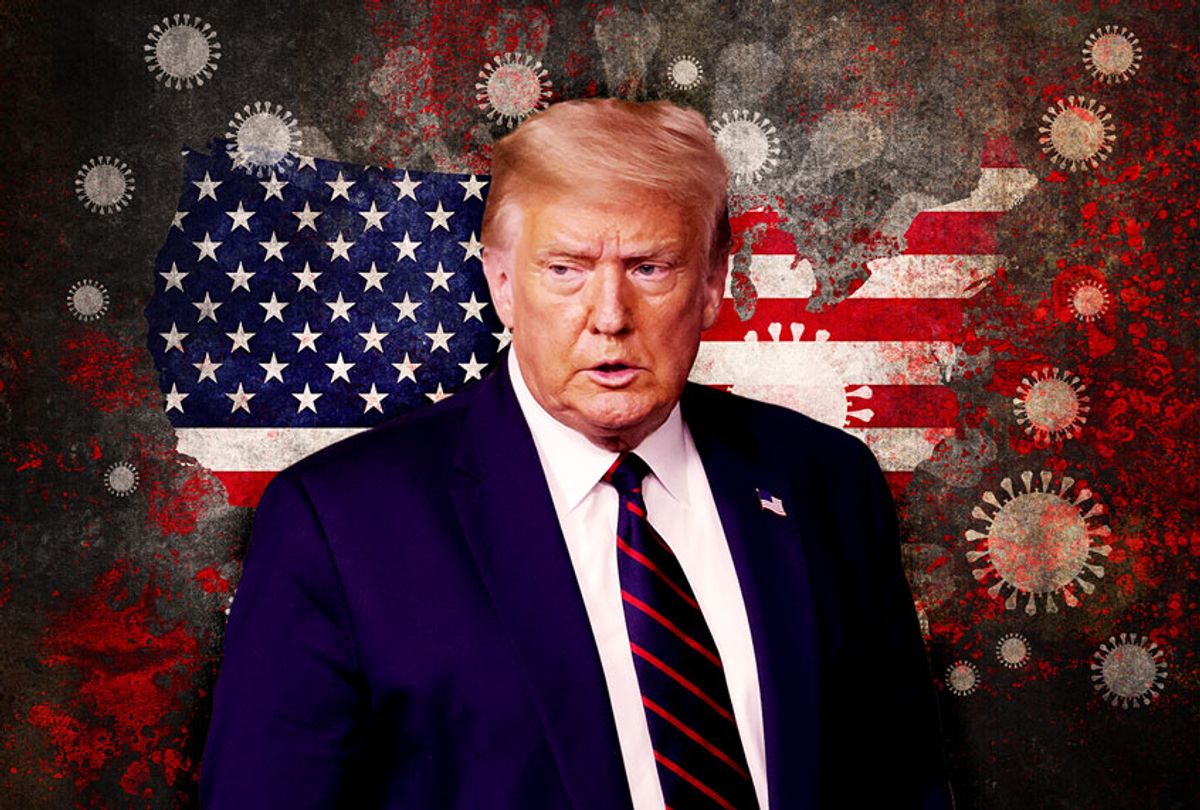 Inevitably, at some point the bombmaker is hurt by his own creations.

Donald Trump has wielded the coronavirus as his own personal weapon. He does not care about the health and safety of the American people. He refuses to wear a mask to help stop the spread of the coronavirus pandemic. Even though Trump knows how lethal the virus is, he encourages the American people not to wear masks either — and has hosted rallies and other large gatherings where people become infected with his plague. Trumpism is a type of religion, and for true believers refusing to wear a mask is an act of love and faith in the cult leader and godhead. In total, the pandemic has been a way for Trump to inflict pain and suffering on Americans who dare not support his regime.

Last week, Donald Trump tested positive for the coronavirus and was hospitalized.

[W]e're seeing a lot of Democrats sending thoughts and prayers this morning. You know, I really think we should see Trump getting COVID as the epidemiological equivalent of a mass shooting, where the shooter opens fire on the crowd and then turns the gun on himself. This is not a tragic accident. It is a crime scene and should be treated as such.

While Donald Trump was hospitalized at Walter Reed Medical Center, Americans as a group sent him well wishes and other positive energy for a speedy recovery. Joe Biden, along with Barack and Michelle Obama and other leading Democrats communicated their concerns for Trump's health and their hope he would quickly recover from the coronavirus. Biden even went so far as to announce that he would stop running "negative ads" against Donald Trump during the time of the latter's hospitalization.

But these wishes could not disguise or overwrite the fact that Donald Trump has become one of the most despised figures in American history.

For a brief moment when Trump's illness was made public last Friday night and Saturday morning, there was a moment of raw joy and honesty on social media and elsewhere. Many were eager to celebrate Trump falling ill from a disease that he made so much worse for the American people. Schadenfreude was embraced as virtue.

In the Age of Trump, an interminable interval in history when a country and so many of its people have been bewildered by a surreal fog of lies, when truth itself has been assaulted, empirical reality has been held hostage and malignant reality has taken hold, such authentic emotions were a type of cathartic truth.

Of course, such a moment was not to be permitted. Social media companies did their best to mute the voices of those celebrating Trump's illness. The editorial pages of some of the country's leading newspapers chastened those who would celebrate Trump falling ill from a disease he repeatedly claimed had been perpetrated by the Democrats and the "fake news media." The gatekeepers of public opinion deemed such sentiments to be outside of the approved limits of public discourse.

The right-wing media was of course quick to pounce on what its leading voices deemed to be "double standards" on the left. Writing at Vanity Fair, Tarisai Ngangura elaborates:

In the middle of all the cheerful posturing, however, was rage for the alleged lack of empathy being shown to the man who has made fun of people living with disabilities, who's mocked Joe Biden's "memory loss" and who hounded Hillary Clinton when she had pneumonia. Donald Trump Jr. shared a thread of blue-checkmark Twitter accounts that professed gladness at Trump's diagnosis. Television personality Piers Morgan, a bastion of kindness and goodwill, tweeted, "Shocking and shameful" after Zara Rahim, a former national spokesperson for Hillary Clinton, allegedly tweeted her hope that Trump would die.

Mollie Hemingway, one of Trump's most oft-quoted Fox News personalities, declared herself "disappointed, genuinely disappointed, to see the glee with which some people responded to this news," and added that there is a "proper way to respond to this news. For people who pray, it is a good time to pray. You should be praying for your world leaders, your leader of your country, every day, but this is a good time to do it."

At Slate, Dan Kois publicly struggled with his mixed feelings about Trump's illness:

The burst of unseemly glee that accompanied the news of the president's positive test was yet another salvo in this four-year war between my feelings, my intellect, and what I've always thought of as my morality. In 2020 the president's malignancy has expanded. He now directly threatens the lives of every person in America. Over 200,000 of them have died so far, in large part because of his incompetence and cruelty. And so hearing that the virus he has spent months downplaying, lying about, and ignoring has, at long last, stricken him was a moment of such narrative perfection that its power was nearly overwhelming.

I'm not inclined to condemn people for finding the news of the past 36 hours, in addition to alarming and embarrassing, richly comic. To laugh at the shitstorm currently overwhelming the Republican Party, including Trump, is not to disrespect life, as the outraged tone police might insist. To laugh at what the Republicans and Donald Trump have brought upon themselves is to respect life, to understand that to take wanton risks with life was always a fool's game. It may not reflect well on the state of my soul that I'm watching this entirely predictable panic in two branches of the government with mordant mirth, but we've all been damaged by the last four years, haven't we?

Whatever one thinks are the most appropriate feelings about Trump and the coronavirus, the default expectation that the American people should send the stricken president good wishes is another example of how far Trump and his fascist movement have been normalized in the first place.

This normalization of Trump continues because basic, fundamental realities about him and his regime are still being denied, treated as forbidden thoughts.

First, in the worst ways possible Donald Trump is not a normal human being. His presidency is abnormal and a betrayal of the country's professed democratic values, beliefs and institutions. Trump and his regime are motivated by cruelty.

Donald Trump has shown himself to be a sociopath, if not a psychopath. He is cruel and malevolent. He is a fascist and an authoritarian. He hates democracy. He only knows how to destroy and not create. He is a white supremacist and misogynist. He has been credibly accused of rape, sexual assault and sexual harassment by dozens of women. His willful sabotage and interference with the country's coronavirus relief efforts are a crime against humanity and an act of de facto genocide, for which — in a better world — he should face criminal prosecution.

Trump is endlessly corrupt. He encourages political violence by his supporters. He does not care about the common good or the general welfare of the American people. He has betrayed his oath of office in many ways and on multiple occasions. He colluded with a hostile foreign country to steal the 2016 presidential election and tried to do it again in 2020.

Moreover, at present Donald Trump is not even trying to convalesce as a normal person might. He has returned to his campaign of chaos with redoubled intensity, sending out more than 120 Twitter messages since Monday. In those tweets, Trump has threatened Biden, Obama, Hillary Clinton and others with prison — or worse — for attempting to stage a "coup" against him. Trump has also attacked the FBI for "betraying" him and also being part of a "plot" to overthrow him. Trump cannot resist his racist impulses, and continues trying to scare white people with tales about Black and brown people rampaging through "the suburbs."

While purportedly ill with the coronavirus, Donald Trump has also appeared in increasingly peculiar staged videos, in which he has proclaimed himself miraculously healed and more powerful than ever, like some type of super-being.

Donald Trump is a political extortionist. As he did several days ago when he ended negotiations for a pandemic stimulus bill, Trump is again trying to extort the American people into voting for him — this time by promising a free universal "cure" for the coronavirus. (No such thing exists, of course.)

In perhaps the vilest example of his recent behavior, as he was leaving the hospital last Monday Donald Trump proclaimed via Twitter:

I will be leaving the great Walter Reed Medical Center today at 6:30 P.M. Feeling really good! Don't be afraid of Covid. Don't let it dominate your life. We have developed, under the Trump Administration, some really great drugs & knowledge. I feel better than I did 20 years ago!

That statement echoes Trump's reported comments that military service members who are captured or killed in battle are "suckers" and "stupid." Trump truly believes that people who get sick or die from the coronavirus somehow deserve their fate because of "weakness" and how they lack "good genes" like his.

Ultimately, it's clear that Donald Trump does not care about other people. Thus he should be treated according to his own version of the golden rule: Do unto him as he has done onto others.

Most people who fall ill from the coronavirus — or who have otherwise been affected by the pandemic —of course deserve our unqualified sympathy, care, and concern. More than 212,000 Americans have died and more than 7.6 million have been infected. Many were older people living in managed-care facilities. Many were poor or working-class people who did not have the option of working their jobs from home. For example, the employees and service staff in the White House and elsewhere who were not given proper protection from Donald Trump and his coronavirus-infected inner circle.

Mary Trump, the president's niece, agrees with these sentiments. On Twitter she recently expressed her sense of "sympathy, empathy, and despair for those who are sick and for those who have died because they were misled, lied to, or ignored." Donald Trump would be excluded by those criteria.

Trump's cultists who refuse to wear masks also do not deserve unqualified sympathy, care and concern when they become infected by the coronavirus.

During the last weeks remaining until Election Day, the mainstream news media should suspend its anthropological expeditions to TrumpLandia where they interview "white working class" people in diners, barbershops, bars and churches in an effort to decode their undying loyalty to Donald Trump. That energy would be better spent (and more revealing of the truth) on interviewing those Americans who are eager to see Trump receive his karmic comeuppance for the cruelty and harm he has inflicted on our nation and a people.

Righteous anger can move worlds. On Election Day and afterward, we will discover if that energy is enough to defeat Trump and drive his movement of hatred and lies back to the periphery of American life.