Is Trump "reaping what he sowed"? Spiritual leaders address views on sinners with conflicted flock

"What do we do when we feel like there’s a person who is very wicked on this earth?" 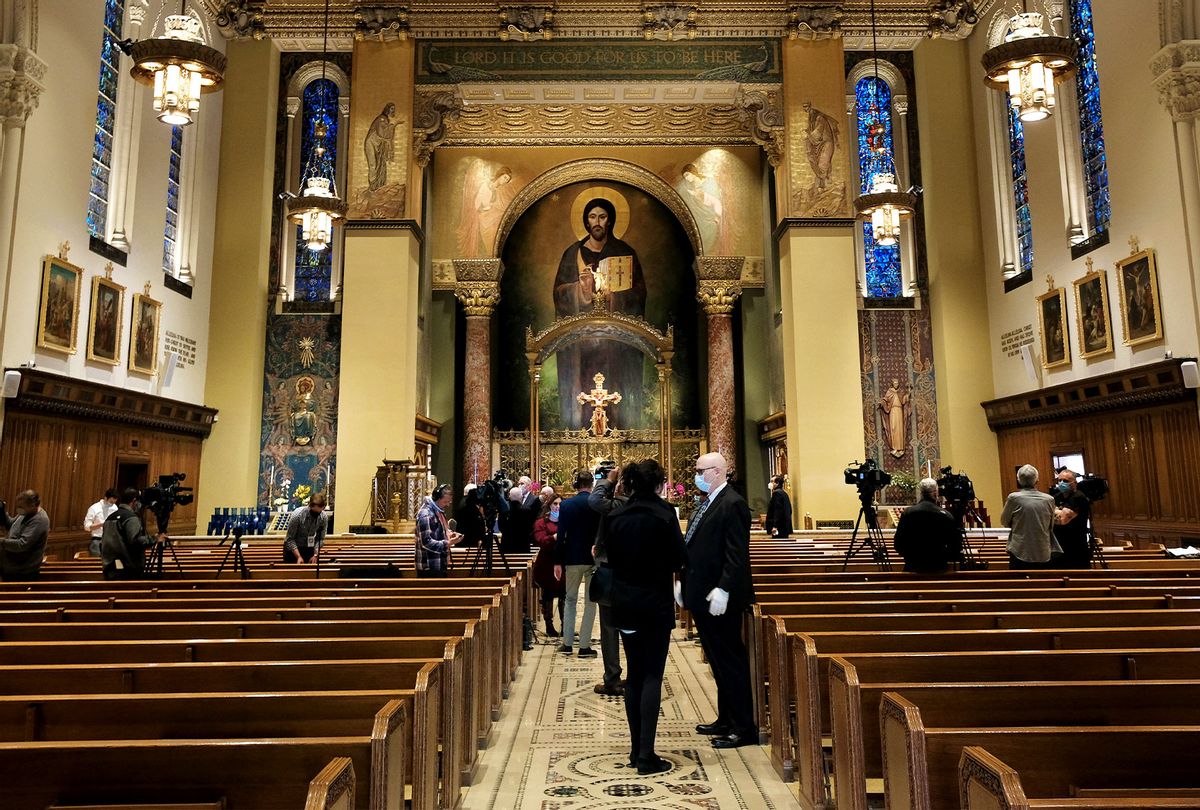 People attend a press conference with the Archbishop of New York, Cardinal Timothy Dolan, at Our Saviour Parish in Manhattan regarding the reopening of churches in the archdiocese amid the coronavirus pandemic on May 21, 2020 in New York City (Spencer Platt/Getty Images)
--

About an hour after President Donald Trump confirmed on Twitter that he and his wife had tested positive for the novel coronavirus, I sent a very early morning text to my friend who is a Presbyterian minister asking her how she planned on contextualizing the news for her largely liberal congregation. "I'm not totally sure yet," she responded. "But my inbox is already flooded."

Flooded with notes from church members who were navigating a complex emotional cocktail of schadenfreude — which is understandable considering the president's egregious mismanagement of the pandemic and his history of abhorrent personal and political stances— and guilt for taking pleasure in the news of Trump's diagnosis.

"It's going to be a lot of answering notes that ultimately amount to, 'Am I bad a person for feeling what I feel?' and an opportunity to discuss what the Bible says about good and evil," she texted.

As Salon's Nicole Karlis wrote on Wednesday, many Americans in general are struggling with similar feelings and, from a therapists' perspective, it's completely normal. Karlis spoke with Amalia Miralrío, LCSW, LMSW, M.Ed, who said that that a "reaction of joyful schadenfreude to Trump's COVID-19 diagnosis could be a way for some to reclaim power in an otherwise powerless relationship dynamic."

"It's a way of reclaiming that sense of power, a way of feeling like someone who has exerted abuse of power and control over you and when that person suddenly loses some of that, you feel that you are gaining a greater sense of equality in the dynamic," Miralrío said. "It's normal to have this emotional response when you are feeling really disempowered in a relationship and feeling that someone is actually trying to harm you."

With that in mind, religious leaders all across the country are preparing for services this weekend which will be filled, virtually or otherwise, with congregants who have spent days contemplating their spiritual obligations — especially in traditions where forgiveness is a central tenet — in these unprecedented times.

For Rabbi Bryan Mann, who is the Rachlin Director of Jewish Student Life at Vassar College, the first person to call him for spiritual counsel was actually his mother.

Mann continued: "On the flip side, there's this really well-known story from the Talmud where there's a rabbi who has some bandits hanging out in his neighborhood. He kind of prays for all of them to die, and his wife, Beruriah, says, 'Don't pray for them to die — pray that they will essentially stop sinning. That's how we eradicate wickedness.'"

Those are, Mann acknowledges, two seemingly divergent teachings ("As the old joke goes, two Jews, three opinions, right?" he says with a laugh), but there's a lesson to be learned in holding tension between both.

"I feel like Judaism and Jewish teachers are known for asking more questions than providing more answers, if you will," Mann said. "But I really think, especially with college students, I really want to open up to those bigger questions and do a deep dive of these two very different sources. What do we do when we feel like there's a person who is very wicked on this earth? And what happens when we've seen a pattern of behavior that doesn't seem to be changing?"

Mann also stressed that he's not the kind of spiritual leader who shames people for their thoughts, especially when those thoughts may be rooted in some kind of trauma. This is something that Perry Dixon, an associate pastor at Highland Baptist Church in Louisville, says is front of mind as he prepares his sermon for this weekend.

"[Trump] is at the helm of so much suffering," Dixon said. "We literally have church members in the hospital and on a ventilator from COVID. We've had a number that have been diagnosed and tested positive, and they're now watching the president minimize the suffering for people."

Speaking to the hardships of his congregants — the LGBTQ members who are concerned over Supreme Court threats to overturn marriage equality, the members who are ill and financially stressed due to the novel coronavirus pandemic — is a way to display truth as a Biblical virtue.

"For me in the pulpit, I need to speak the truth where I can," Dixon said. "For me, that's rooting it in our church members' experiences."

Rev. Jonah Overton is the lead pastor at Zao MKE, a Milwaukee church they started after seeking out local religious communities where they could both love Jesus and also be embraced "in some of [their] own marginalized identities, including [their] queerness that transness." As such, Overton understands that their church members may be experiencing some complicated feelings.

"I think we're all having a mix of emotions right now," Overton said. "As somebody who leads a congregation full of people who have been directly or indirectly harmed by the abuses of power by the president, it's a complicated moment to see him suffering from the fallout of the abuses of those powers."

They continued: "I think that one of the things that any conversation about compassion or prayer towards the president in general, but particularly in light of this illness, has to contend with is that President Trump is right now fundamentally reaping what he's sowed."

Overton said that Christians can simultaneously lament the evil that Trump has cultivated in the world, hold him accountable for the actions that he has taken — or failed to take — that have harmed other people, and still have compassion for him as a child of God. They would encourage people who are struggling with their complex feelings about Trump and his illness to recognize that having both a desire for both justice and understanding is not only natural, but right.

"Holding those things in tension is at the heart of the Gospel and the way that Jesus taught and lived," they said.