Hey, media: Trump's massive pandemic failure is still happening — it's not in the past 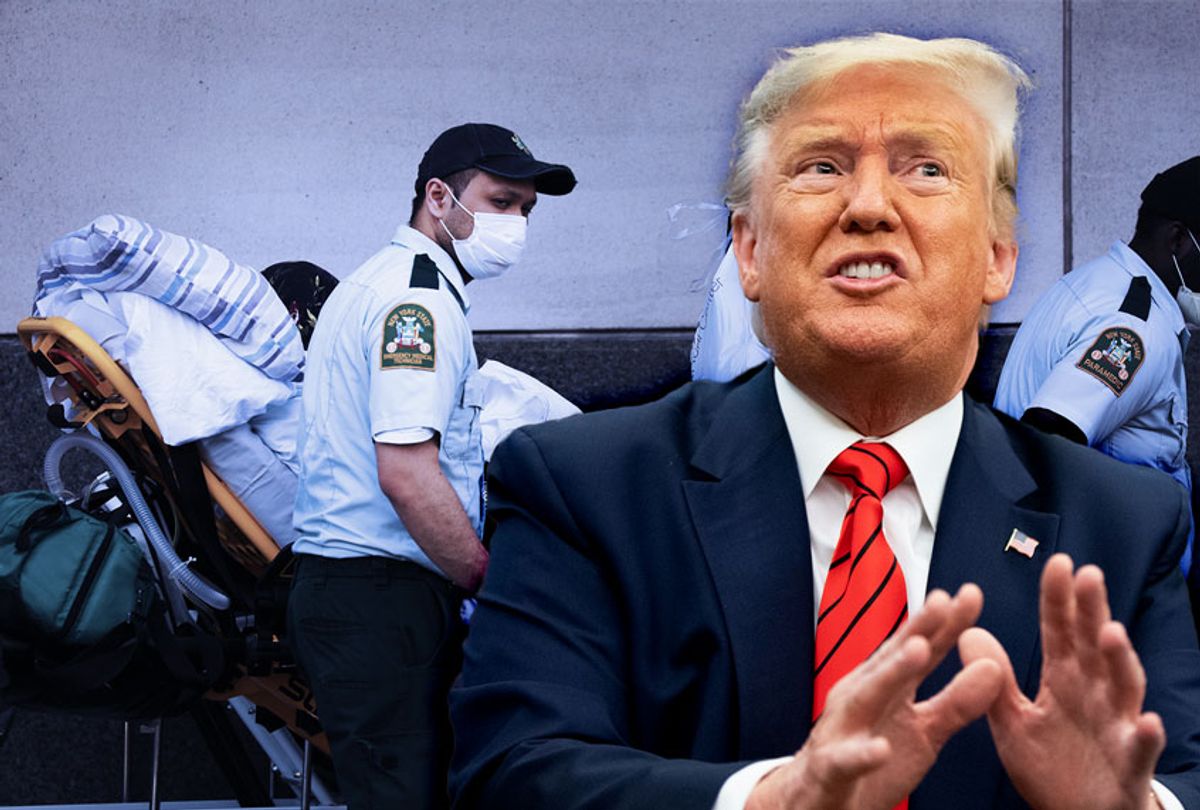 The retrospectives as the United States crosses the threshold of 100,000 deaths from the COVID-19 pandemic are moving and important, but they are missing something — and it's not just the recognition that many of those deaths were avoidable.

It's the recognition — the alarm, the feeling of panic — that every day that goes by is another day that Donald Trump fails to lead, and that the federal government fails to take the steps that could save tens of thousands more lives in the weeks and months to come.

While we continue to lose people at the rate of about 1,000 every day, much of the Trump coverage has turned to other matters. What reporting there is about Trump and the virus has largely become about his astonishing lack of empathy, his unseemly rush to "reopen" and his sadistic campaign against mask-wearing — all of which are legitimate stories.

But it's almost as if the D.C. media has forgotten what Trump and the federal government urgently need to do — and could be doing — to save people's lives.

As I have written repeatedly, experts in public health are essentially unanimous that minimizing the toll of the virus depends on forceful federal action to supercharge the supply chain for testing, massively increase the daily number of tests, mobilize a nationwide contact-tracing program and get infected people to self-isolate.

But when it comes to the virus, Washington is doing basically none of the things we need it to do.

An explanation of the Trump administration's testing strategy, required by Congress and released on Sunday, simply rephrased the intention to dump almost all the responsibility on the states.

In the New York Times, Apoorva Mandavilli and Catie Edmondson quoted Scott Becker, executive director of the Association of Public Health Laboratories, explaining that only the federal government is equipped to navigate national and international supply chains: "You can't leave it up to the states to do it for themselves. This is not the Hunger Games."

Meanwhile, major supply chain issues continue to slow testing initiatives around the country.  A new survey of labs by the Association for Molecular Pathology found that supply chain disruptions "have had a significant impact on their testing capacity" and concluded that "additional resources are needed to implement and/or maintain testing."

NPR's Joel Rose reported on Thursday about "a new bottleneck emerging: A shortage of the machines that process the tests and give results." Rose quoted dire warnings from Ashish Jha, director of the Harvard Global Health Institute, who called the problem "a classic market failure" that can only be resolved by the federal government:

"This is a place where I think the government just needs to step in and pay companies — buy the machines for companies, or pay large amounts for these tests," Jha said. "This is what many of us have been asking for from the federal government. … And it's very frustrating."

And Erik Ortiz wrote for NBC News that despite the importance of contract tracing, public health departments around the country "are wrestling with a lack of necessary resources from the federal government, a need for more qualified workers and a growing backlash of misinformation."

Ortiz noted "the absence of a cohesive national plan and coherent communication from the White House about the importance of contact tracing," and quoted Jeremy Konyndyk, a senior policy fellow at the Center for Global Development, calling it "a massive messaging failure from this administration."

Konyndyk told Ortiz that officials should have started preparing the public for the idea of tracing and the effort involved while most people were still isolating at home. "But the federal government chose not to own the issue," Konyndyk said.

Arguably the best overview of the continuing failure of the federal government to protect Americans I've seen recently came from William Wan and Carolyn Y. Johnson, in a Washington Post article on Wednesday that was ostensibly about how a vaccine won't solve everything. Read the whole thing. But let me pull out some of the key points:

There is, of course, no master plan.

"It's like we have attention-deficit disorder right now. Everything we're doing is just a knee-jerk response to the short-term," said Tom Frieden, former director of the Centers for Disease Control and Prevention. "People keep asking me, 'What's the one thing we have to do?' The one thing we have to do is to understand that there is not one thing. We need a comprehensive battle strategy, meticulously implemented."

All the sacrifices we have made thus far have essentially been for nothing.

Arriving at this moment of transition required countrywide shutdowns, soaring unemployment and devastating blows to our economy and mental health. All that effort was supposed to buy us time to think, plan and prepare, said Irwin Redlener, director of Columbia University's National Center for Disaster Preparedness.

"What's concerning is that I don't see any signs the federal government has learned any lessons and is doing anything differently to prepare for the next waves," he said.

Each of the "hundreds of cities and counties reopening" is like "a mini laboratory yielding valuable data on what will work against the virus in coming years." But the federal government has done nothing to help capture or interpret that data.

And you don't hear a word from Washington about the long-term changes that the virus may necessitate — things like doors that don't require grasping a handle, traffic signals that pedestrians don't have to push, robots for meatpacking plants, routine diagnostic tests, and mandatory paid sick leave.

I wish more opinion writers had done what the USA Today editorial board did this week, using the passing of a somber threshold to judge Trump. The board wrote:

Now, with more than 100,000 Americans dead from the coronavirus epidemic and large sectors of the economy on life support, it's time to assess whether the president has lived up to his obligation and responsibility.

The inescapable conclusion is that he has not. Some disarray is inevitable during a rapidly evolving crisis, and COVID-19 is the worst health disaster the world has faced in a century. But Trump has compounded the damage by undermining his administration's scientists, heralding a risky antimalarial drug as a potential coronavirus game changer, ruminating about injecting patients with disinfectants, promoting magical thinking about the virus disappearing, and refusing to lead by example by wearing a mask in public….

Nearly five months into 2020, the president continues to claim vast authority while shuffling responsibility off to state and local officials. Even as Trump pushes for reopening businesses, schools and churches, the nation lacks the sort of comprehensive testing, tracing and isolating framework that public health officials say is needed to suppress outbreaks until there's a vaccine or cure.

Trump, himself, has almost completely ignored the passing of the threshold. Ashley Parker noted in the Washington Post on Thursday that he "has focused much of his time in recent days on matters other than the coronavirus," for instance by spending the Memorial Day weekend playing golf and "attacking rivals in deeply personal and at times sexist terms."

But that doesn't mean that political reporters should follow his lead.

Mehdi Hasan of the Intercept asked a heart-breaking question on Wednesday: "We have normalized a multiplicity of Trumpian excesses, abuses, and crimes over the past three and a half years. Will we now normalize mass deaths too?"

The answer from news organizations should be a resounding "No."