Trump's claim to have been "cured" of COVID-19 is "bombastic" and not based in fact, experts say

It is unclear if Trump himself is out of the woods from COVID-19, but he definitely has not found a "cure" 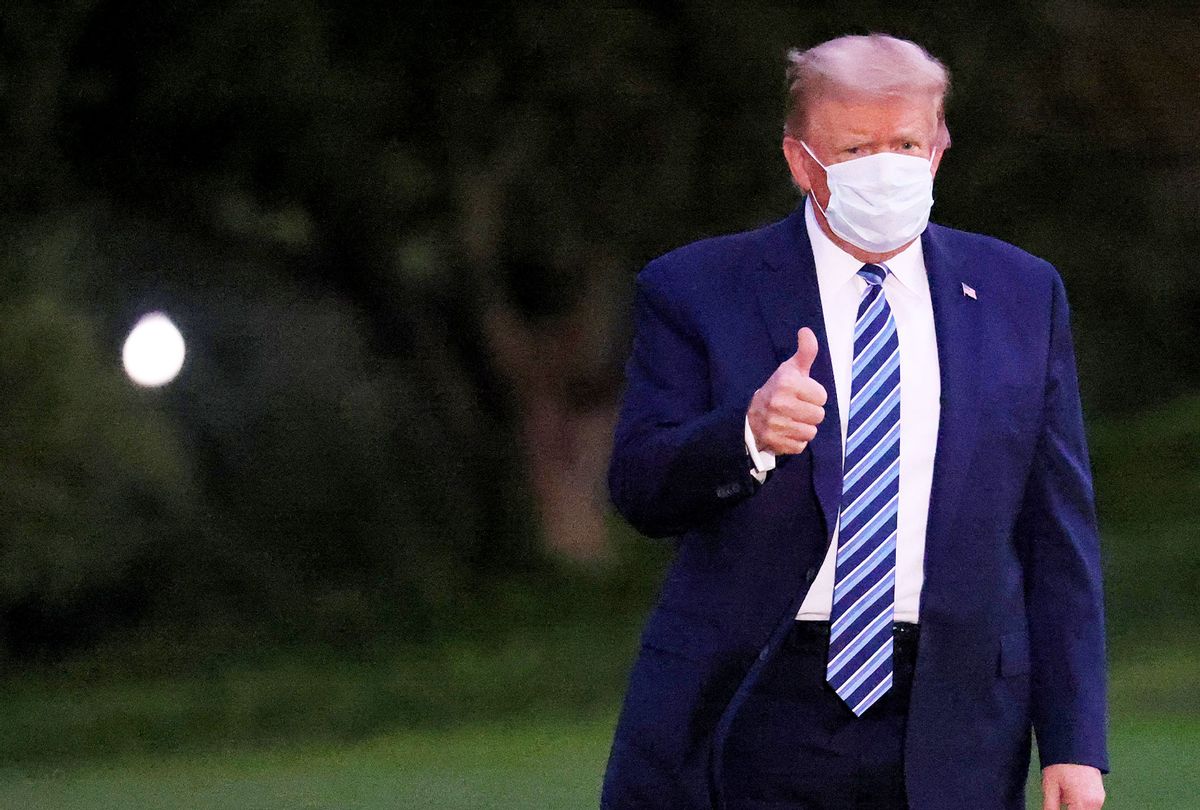 Although President Donald Trump claimed on Wednesday that the special treatment he had received for COVID-19 had "cure[d]" him, scientists agree that the president has not in fact been cured — and that by claiming so on video, he is spreading dangerous disinformation about how COVID-19 is treated and how the novel coronavirus infects the body.

In his video, Trump claimed that his novel coronavirus infection was "a blessing from God" because his treatment proved "much more important to me than the vaccine." He claimed that the experimental antibody cocktail given to him by Regeneron, REGN-COV2, "wasn't just therapeutic, it made me better. I call that a cure." He also claimed that he was going to arrange it so that people could receive this drug for "free."

Salon spoke with a number of doctors and public health experts, all of whom agreed that the notion of Trump having been "cured" by his medical treatment is outrageous.

"It would be VERY unusual for him not to still be infected," Dr. Alfred Sommer, dean emeritus and professor of epidemiology at Johns Hopkins Bloomberg School of Public Health, told Salon by email. "There is always the possibility that the unlicensed cocktail of monoclonal antibodies he received early in the course of his disease was unusually effective; but that would be very unlikely until real data are seen. More likely, he is being 'Trump,' made more bombastic by the heightened sense that the dexamethasone he received commonly causes."

Sommer's comment about dexamethasone refers to how the steroid, which is prescribed to COVID-19 patients when doctors are concerned about severely lowered oxygen levels and want to prevent a patient's immune system from fatally overreacting, can cause side effects; those include severe mood swings, insomnia and nervousness. Less common psychological side effects include confusion, depression, delirium, hallucinations and paranoia.

Dr. Russell Medford, Chairman of the Center for Global Health Innovation and Global Health Crisis Coordination Center, told Salon that even if the president misspoke and meant to say he is "immune" to the disease, rather than "cured," even that would not make any sense given what we know about the science of COVID-19.

"What we do know is the president has been infected with COVID-19 and he is currently going through a period in which the disease will run its course," Medford told Salon. "His statement that he is immune is not based on any obvious facts to the case and a full and complete immune response would not be expected to occur until later, if at all, in the course of this disease."

Dr. Georges Benjamin, executive director of the American Public Health Association, echoed these thoughts, writing to Salon that "his claim about being cured is wrong. Nothing currently exists that can cure this disease. Your body has to recover from it. The medications he was given helps his body recover a bit faster and reduces his symptoms. But he has to heal naturally which may take weeks."

Based on known science, the novel coronavirus has an incubation period of roughly 14 days, and the infected who develop symptoms are likely to start doing so within four or five days of contracting the virus. Throughout that two week period, people with COVID-19 remain highly contagious, which is why they are often held under quarantine. While there are ways of treating sufferers, there is no evidence so far that any of them are "cures."

"COVID-19 has some established and emerging treatments for it and has a variety of clinical manifestations even without treatment, including complete resolution," Dr. Monica Gandhi, an infectious disease doctor and professor of medicine at the University of California–San Francisco, wrote to Salon. "There is not yet evidence that a particular treatment  — e.g. the monoclonal antibody that President Trump received — cured him of COVID-19."

Dr. Anthony Fauci, director of the National Institute of Allergy and Infectious Diseases and Trump's most prominent adviser in dealing with the pandemic, expressed similar thoughts to The New York Times. As Fauci explained to the publication, "I think it's a reasonably good chance that the antibody that he received, the Regeneron antibody, made a significant difference in a positive way in his course." At the same time, when you have only one case study, "you can't make the determination that that's a cure. You have to do a clinical trial involving a large number of individuals, compared either to a placebo or another intervention."

Science aside, Trump's statements regarding his medical treatments, and their accessibility to the general public, are similarly misinformed. The medical treatments he received are unlikely to be available to the average American. REGN-COV2 has not yet been authorized for production by the Food and Drug Administration, and Trump was only able to access the drug because of a compassionate use permission request made by Trump's staff. Trump's elite status as president seems to have played into the decision to authorize use: "When it's the president of the United States, of course, that gets — obviously — gets our attention," Regeneron's CEO told the New York Times.

In addition to dexamethasone and REGN-COV2, Trump also received an antiviral drug called remdesivir, which is thought to possibly hasten recovery time in patients. Although Trump claims he would make this free for Americans, the medication regimen that he received is extremely costly and would likely only be available to all Americans if they had access to the same military health care system that Trump used — which is, in effect, a single-payer health care system specifically for the military and veterans.

"[It's] way too expensive" for ordinary Americans, as Dr. William Haseltine, the founder and former CEO of Human Genome Sciences, told Salon. "In addition, you have to be in a hospital where they're going to stick a needle in your arm and infuse it over a long period of time. And the same thing is true for that five day course of remdisivir. You've got to infuse that in the hospital over a five day course. So he was getting two drugs that required intrusions, the kind of stuff that makes you feel like a pin cushion."

There are also ethical concerns about Trump's repeated touting of Regeneron. Trump's video caused a 4.7% increase in Regeneron stock. The president used to own stock in the company and he is friendly with its CEO, Leonard Schleifer, who is a member of one of Trump's golf clubs and whom the president calls "Lenny."