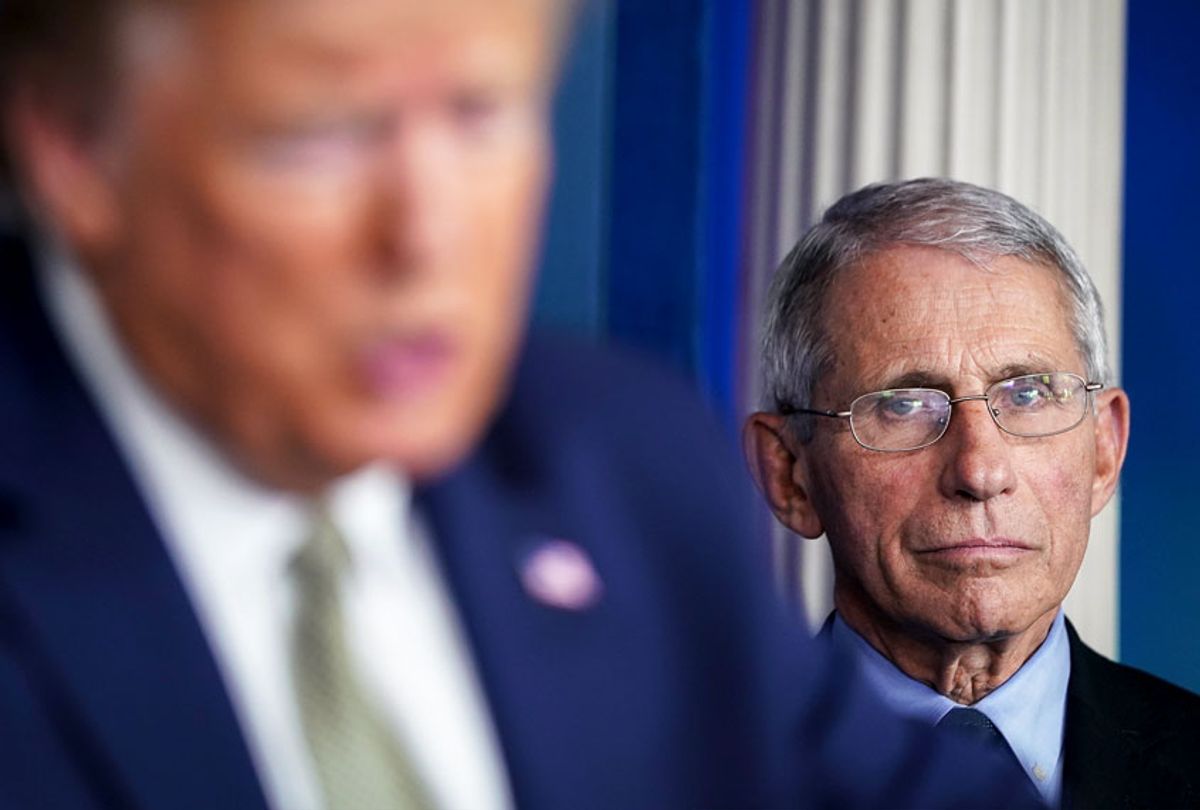 Dr. Anthony Fauci said Sunday that President Donald Trump's campaign took his comments out of context and used them without his permission in a new ad.

The Trump campaign used an excerpt from an interview Fauci did all the way back in March to praise the president's widely-criticized response to the coronavirus the same week that ABC News host Jon Karl accused the White House of blocking Fauci from speaking to the media.

The 30-second ad, which was released after Trump was discharged from Walter Reed Medical Center last week, touted Trump's personal experience with the coronavirus.

"President Trump is recovering from the coronavirus, and so is America," a narrator said in the ad. "Together we rose to meet the challenge, protecting our seniors, getting them life-saving drugs in record time, sparing no expense."

The ad then shows an interview with Fauci in which he said, "I can't imagine that anybody could be doing more."

Fauci said that the ad took his comments out of context and used his interview without permission. He made clear that he was referring to health officials' efforts, not those of Trump.

"In my nearly five decades of public service, I have never publicly endorsed any political candidate," he told CNN. "The comments attributed to me without my permission in the GOP campaign ad were taken out of context from a broad statement I made months ago about the efforts of federal public health officials."

"These are Dr. Fauci's own words. The video is from a nationally broadcast television interview in which Dr. Fauci was praising the work of the Trump Administration," he told the outlet. "The words spoken are accurate, and directly from Dr. Fauci's mouth."

The comments were taken from an interview Fauci did with Fox News in March, not long after the pandemic first hit the United States. Since then he has acknowledged that the Trump administration's response has been among the worst in the world as the US, which makes up about 4% of the world population, reports 20% of all the coronavirus deaths in the world.

"We've never had a threat like this. The coordinated response has been...There are a number of adjectives to describe it -- impressive, I think is one of them. We're talking about all hands on deck. I, as one of many people on a team, I'm not the only person," Fauci said in March. "Since the beginning, that we even recognized what this was, I have been devoting almost full time on this. I'm down at the White House virtually every day with the task force. It's every single day. So, I can't imagine that under any circumstances that anybody could be doing more."

Trump, who has continued to downplay the severity of the coronavirus even amid his own infection, has repeatedly complained that Fauci receives higher approval ratings than he does.

But Fauci has repeatedly pushed back on Trump's rosy spin and criticized the White House for ignoring its own coronavirus guidelines during an event to announce Supreme Court nominee Amy Coney Barrett, after which the president and numerous aides and allies tested positive.

"We had hoped to talk to Dr. Fauci about both the outbreak at the White House and across the country. He was more than willing to join us, but the White House wouldn't allow you to hear from the nation's leading expert on the coronavirus," Karl said. "In fact, they wouldn't allow any of the medical experts on the president's own coronavirus task force to appear on this show."

CBS News and NBC News' "Meet the Press" have been unable to book Fauci for weeks or months, according to HuffPost, and the White House turned down a Fox News Sunday request to interview Vice President Mike Pence, the head of the administration's coronavirus task force.

White House communications director Alyssa Farrah pushed back on the reporters' allegations, arguing that Fauci appeared for interviews with PBS News and NBC News in the past week and that Karl "didn't request any other member of the task force."

Karl responded by publishing an email he sent to Farrah showing that he asked to speak with any of a number of Trump administration health officials.

"The truth matters," he tweeted. "The requests for Dr. Fauci and the other members of the task force were made directly to you — multiple times."

Karl later added that the Trump campaign told ABC that "they will continue to run this ad featuring Dr. Fauci's despite his objection."