The White House told Salon last week that Trump had always tested daily; reports indicate that is not true 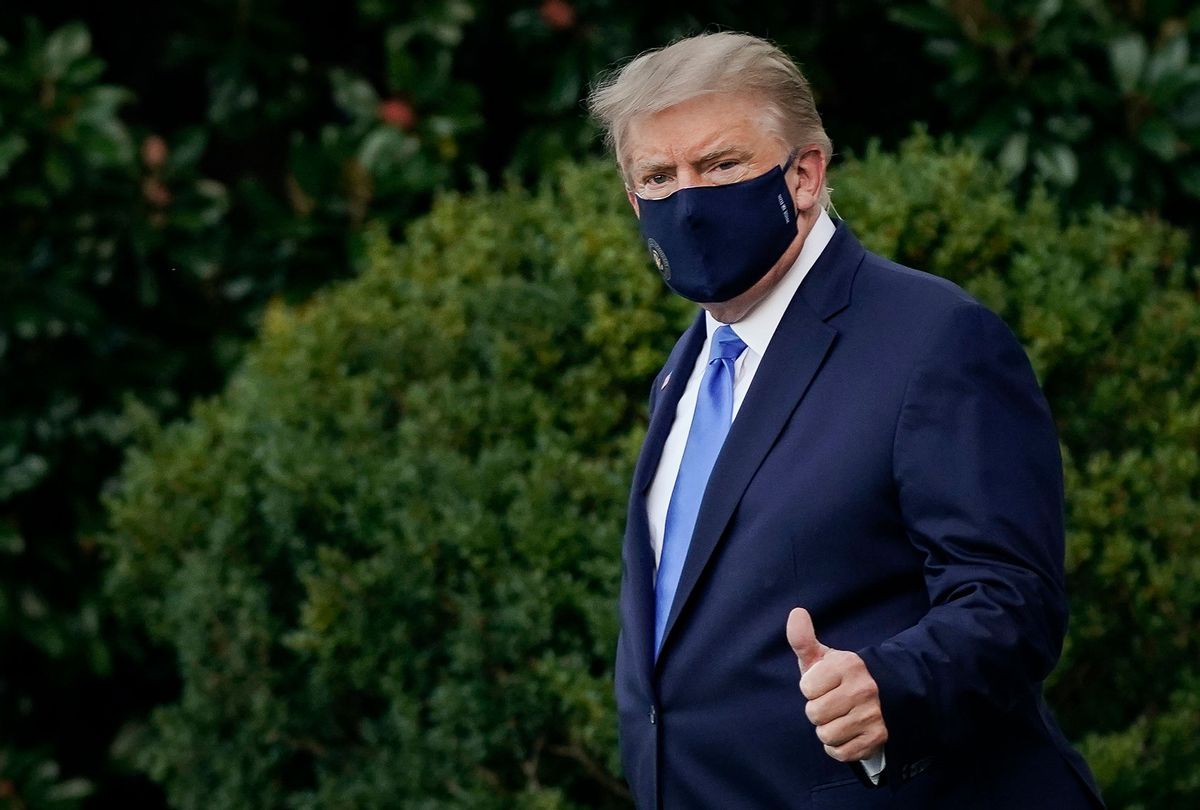 President Donald Trump has not been tested daily for the coronavirus, the New York Times reported Tuesday, which raises questions about whether the White House lied about the issue recently in on-the-record emails with reporters.

Citing "two people familiar with the practices," The Times reported that "the president himself was not tested every day."

However, Salon had asked senior press staff in an Oct. 2 email whether the White House had stopped testing people close to Trump daily in recent weeks, or whether the president had skipped or lapsed in his daily test routine. White House deputy spokesperson Judd P. Deere responded, "No."

In other recent emails, administration officials told Salon that Trump was tested "regularly," but would not specify. Deere did not reply when asked to confirm his denial for this article.

It is still not clear when the president, who was hospitalized with the virus over the weekend, last tested negative. The critical piece of information, which both the White House and the president's physician, Dr. Sean Conley, have declined to provide, would indicate whether Trump had been infected before the first presidential debate last Tuesday, or ahead of a fundraiser he attended Thursday at his Bedminster, N.J., golf club.

Citing an individual familiar with the matter, The Wall Street Journal on Monday reported that Trump and the first lady had tested negative on a rapid test ahead of the Bedminster trip on Thursday morning. But when Salon asked for confirmation, the White House could not affirm the claim.

Trump first announced his positive test in an early Friday morning tweet. The White House released a memo around the same time in which Conley says he had "received confirmation" that the president and first lady had tested positive for the virus.

However, CBS News later reported that Trump had received a positive rapid-test result earlier that day, which he declined to mention during an interview with Fox News host Sean Hannity. Instead, the president discussed the recent positive diagnosis of top aide Hope Hicks.

"I just heard about this," Trump told Hannity, even though Hicks had tested positive that morning. The news had reportedly prompted Trump to take a rapid test upon his return from Bedminster, which came back positive and triggered a second PCR test to confirm the results.

The White House has created the public impression that the president is tested daily. In late July, press secretary Kayleigh McEnany told reporters that Trump was being tested "multiple times a day." Though Trump disputed the claim later that day, he said, "I do take probably on average a test every two days, three days."

In early May, Trump told reporters at the White House that he and his inner circle would be tested daily. The announcement came hours after one of Trump's personal valets tested positive for COVID-19.

A spokesperson for the Cleveland Clinic, which hosted Tuesday's presidential debate, told Salon that the Trump campaign told it "on the honor system" that the president had tested negative ahead of arrival, but the White House has yet to confirm. The Trump family did not wear masks in the auditorium, and they brushed off a debate staffer when reminded.

The debate came on the heels of a heavily-attended Rose Garden celebration for Trump's nomination of Amy Coney Barrett to replace the late Justice Ruth Bader Ginsburg on the Supreme Court, after which several attendees tested positive for the virus — including several who helped prepare Trump for the debate.

The White House denies that the nomination festivities were a superspreader event.

Since mid-August, the White House has used a new rapid test from Abbott, which claims 97% accuracy based on screening individuals within seven days of first symptoms. Given that Trump first tested positive on Thursday, Dr. Michael Osterholm, the director of the Center for Infectious Disease Research and Policy at the University of Minnesota, told Kaiser Health News that the president's infection "likely happened five or more days ago."

"If so, then he was widely infectious as early as Tuesday" — the day of the debate — Osterholm said.

The White House kept Hicks' diagnosis so mum that even campaign manager Bill Stepien and adviser Chris Christie, who helped prep Trump for the debate in close quarters over the course of several days, did not find out until news reports. Both tested positive, and Christie, who like Trump is obese, announced that he checked in to a hospital on Friday "out of an abundance of caution."

Trump's personal attorney Rudy Giuliani, 76, was also in the prep rooms, and told Salon on Tuesday morning that he had so far not tested positive. Giuliani, who coughed noticeably during a Fox News appearance Monday, added that anyone who wondered if he might have COVID-19 "has become consumed by hate and it's eating away at them. The Left, the Democrats have let it get out of control."

"No symptoms of any kind," Giuliani said. He did not reply to follow-up questions through Wednesday.