Psychiatrist Judith Herman: Trump’s collapse in the polls has “undeniably” made him more “dangerous”

"I think the call for an armed uprising should be taken very, very seriously," Herman says. "He doesn't kid around" 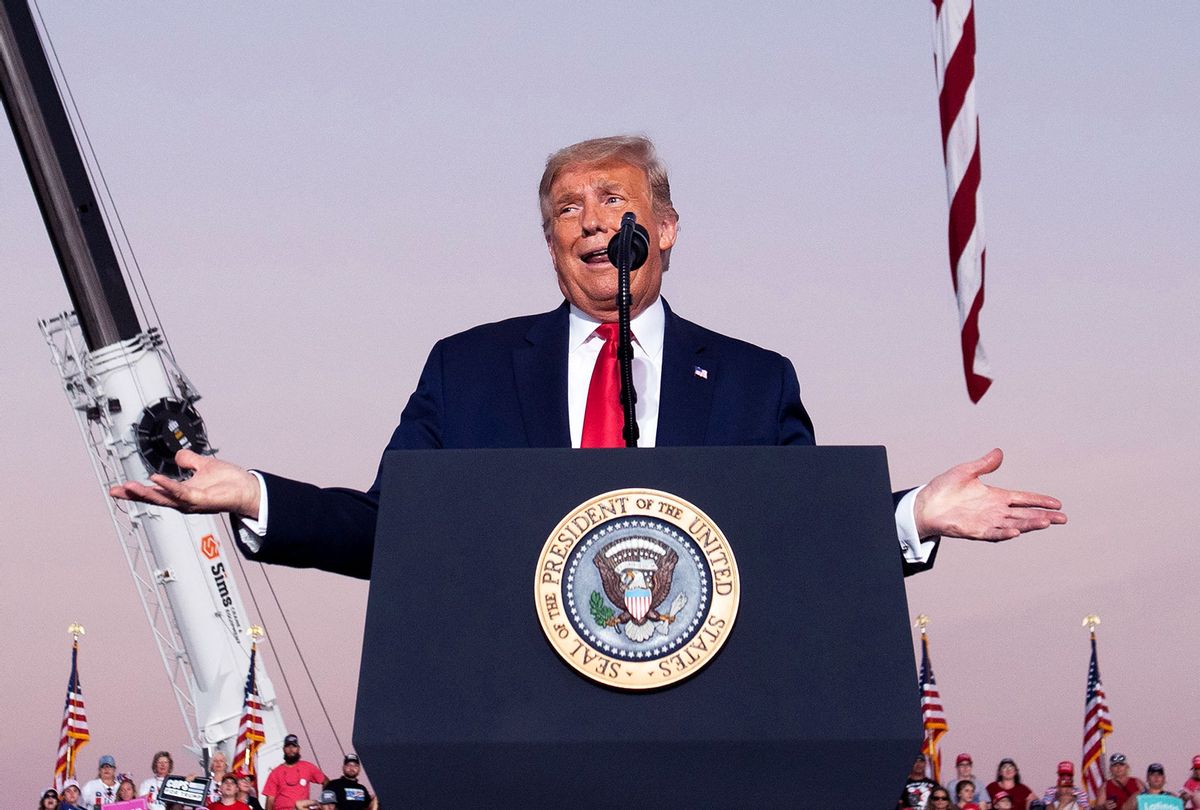 Dr. Judith Herman, the co-founder of the Victims of Violence Program at Cambridge Health Alliance and a longtime psychiatry professor at Harvard Medical School, has been warning about President Donald Trump's mental health since the 2016 election, when she called on then-President Barack Obama to request a "full medical and psychiatric evaluation" of the president-elect.

Since then, Trump's "grandiosity" has grown even worse, Herman said in an interview with Salon, and his supporters approach "cult behavior." With Trump's poll numbers plummeting and his attempts to sow doubt in the results of the election, the specter of violence amid calls for an uprising have made him even more "dangerous," she added.

Herman, who was among the dozens of mental health professionals who expressed concern about the president's mental health in "The Dangerous Case of Donald Trump" and spoke out at events hosted by psychiatrist Bandy Lee, spoke to Salon about Trump's "mental status" amid his electoral trouble and the dangers posed by his "cult"-like supporters.

Salon: Why did you decide to publicly speak out about the president's mental health?

Herman: Well, it started with the election of 2016, which I was kind of shocked and upset about like many people. And so what I did was I wrote a letter in November 2016 to President Obama, who was still president then. And a couple of my colleagues signed on, and it was a very short letter. It just basically said, "I'm worried about the mental instability of this president-elect — and for these reasons. And is there a way to require him to have a fitness evaluation that would involve the complete medical and psychiatric eval assessment by neutral professionals?"

And of course the answer was "no." There is no such mechanism. There is, actually, for high ranking military officers — except for the commander-in-chief. They have to go through a fitness evaluation every year. And I never did hear back from the president — Obama — but the letter . . . did go public. Huffington Post got hold, and it went viral. And Gloria Steinem read it at the Women's March and put it on her website, which was very exciting.

And so then Bandy Lee contacted me. She was putting together what she called a town hall meeting in March of 2017 . . . We basically said, "We have a duty to warn, or duty to be what Robert Lifton calls the "witnessing professionals," when we think someone is a danger to the country."

You've discussed the Goldwater rule, which prohibits psychiatrists from diagnosing public figures they have not examined, and the American Psychiatric Association has been very critical of mental health professionals that have spoken out. Have you experienced a backlash as a result of your decision to speak publicly?

No, not personally. I mean, I'm still a member of the American Psychiatric Association. Actually, I'm a Distinguished Life Fellow of the American Psychiatric Association — for what that's worth. When we were working on the book, Robert Lifton and I called ourselves "village elders." But some contributors to the book resigned from the APA either over this issue, or I think Bandy had resigned quite some time before. But, no. I mean, my attitude was if they wanted to kick me out of the organization, that was OK with me. But I haven't actually experienced any problems.

You said ahead of Trump's presidency that you were particularly worried about how Trump's "psychopathology might be amplified by his access to power." How have you seen that play out during his administration?

Oh, unfortunately it has been pretty much what we predicted. I mean, you have grandiosity, you have a tendency to deny reality and you have paranoia and attraction to violence. And it seemed to me that all of those things would be amplified by access to power. I mean, the grandiosity and the insistence on his own alternative facts — as one of his spokespeople put it so delicately — has been enabled by all of his courtiers and his sort of cult followers, particularly around denying reality during the coronavirus pandemic.

I mean, it does approach that kind of cult behavior — including the MAGA hats and the willingness to expose themselves to a lethal pathogen — because loyalty to the cult leader requires it. And his grandiosity is now . . . to the point where there is a sense that he is immortal or invulnerable or invincible. He could conquer the virus by being this Superman-great leader.

I think Tom Friedman had a column in The Times the other day that said, "Trump's not Superman. He's Superspreader." And it seems even worse now that he's out of the hospital and claiming that he feels great.

He's claiming to have found a cure.

Yes. Well, I mean, now he's on dexamethasone, which is a steroid known to produce euphoria, and grandiosity and psychosis as a side effect for some patients. If you have a tendency in that direction in the first place, it probably doesn't help. But, yes, it's become more florid, certainly. as time has gone by.

And then, of course, the incitements to violence and the paranoia have similarly become more explicit — more frequent. And now, he is retrieving wilder and wilder conspiracy theories and obsessing with particular enemies. So I would say that you can't really know his mental status without a direct examination, but what we see of his mental status looks more floridly disturbed as time has gone by.

You described him as a cult leader. What do you think pulls his supporters into that cult to begin with?

Oh, I wish I knew. I mean, let's not minimize misogyny and white supremacy . . . If he can be said to have principles, those are the only two he's got — and they're very consistent. And, I think, certainly there is a hardcore [following] for whom that is the most important thing. For others, I'm puzzled. I mean, I do think the politics of resentment clearly . . . not just the resentment of women and Black people who don't know their place anymore, but the resentment of people who feel disrespected and that their issues and their wellbeing are not reflected in ordinary politics. It needs an extraordinary leader to shake things up — change things.

I mean, I think those two ingredients by themselves would make maybe the kind of third party that we've had periodically right along . . . when various segregationists ran for president, for example. But I think the fact that there are very powerful and wealthy enablers is what transformed this into the takeover of a major political party, and the success of the Electoral College. And then, of course, the implementation of their program has nothing to do with the white male working-class and rural folks who feel left behind.

That's been a running theme in Republican politics, though. An aggrieved white base supports the candidate who mostly works to advance the interest of the rich.

Yeah, it has been. I mean, many of the things we're seeing in this presidency are not new at all. Certainly we've had demagogic leaders before. We've had this kind of alliance. I think that this particular configuration of the Republican Party began probably when Lyndon Johnson signed the Civil Rights Act and said, "We shall overcome." And the solid South, which had been a Democratic one-party state became a Republican one-party state for a long time.

There's been a lot of talk lately about how Trump might not accept the results of the election. You've warned in articles that his narcissism just "can't bear" the thought of losing. How do you think he might respond to a loss? And does it even matter whether he loses by a little or a lot?

Oh, I think it matters a lot in terms of how successful his call for an uprising will be. I mean, he clearly has in mind . . . that his Proud Boys, a combination of militias, probably the armed folks that we saw in Washington when he tried to drive out the protesters, when he had to have a photo-op in front of the church with the Bible. They turned out to be from ICE, and other immigration enforcement and Park Police. And it was a mix of basically paramilitaries. And I've been thinking about the ICE people as, in some ways, the equivalent of the SA in Nazi Germany — the Sturmabteilung. And I think the call for an armed uprising should be taken very, very seriously. He doesn't kid around. When he says he would not be willing to accept the results of any election he lost, I think that does really need to be taken very seriously.

There was a report that the FBI busted up a plot to kidnap Gov. Gretchen Whitmer, D-Mich.

Yes. Well, there have already been two armed incursions into the legislature in Michigan that closed down the legislature. I mean, this is not a joke.

But the question is: Are these going to be isolated, scattered bands that can be relatively easily contained or not? Or are they going to have an army of lawyers and other establishment enablers contesting every bit of the election? And I think the only way — it's that combination again that gives you fascism. And I think the only way to prevent that is to have a very clear cut result.

Are you worried that Trump may become even less restrained once he's out of the White House?

The problem is as soon as he's out of the White House, he faces multiple [possible] criminal charges, as well as civil liabilities. And that's not going to go anywhere — that's going to progress. And, I mean, I do have enough trust in our institutions. Or hope, I guess, might be a better word, to think that there will be a reckoning. Now, what will happen to his mental status under those circumstances? I think it's not going to be pretty. I mean, it's already not pretty.

But when do you say if someone veers over into psychosis, right? What's the judgment call? And that's not a judgment call that one can make from a distance. I mean, in that sense — I think most of the time the Goldwater rule is perfectly appropriate. Don't make diagnoses from a distance. Ordinarily, we have our patient's permission and all that, but what we can assess from a distance is dangerousness. And when the person in the most powerful office in the world is floridly and undeniably dangerous, I think we have to take it seriously. We also have to hope that any crazy military orders that he gives will not be followed.