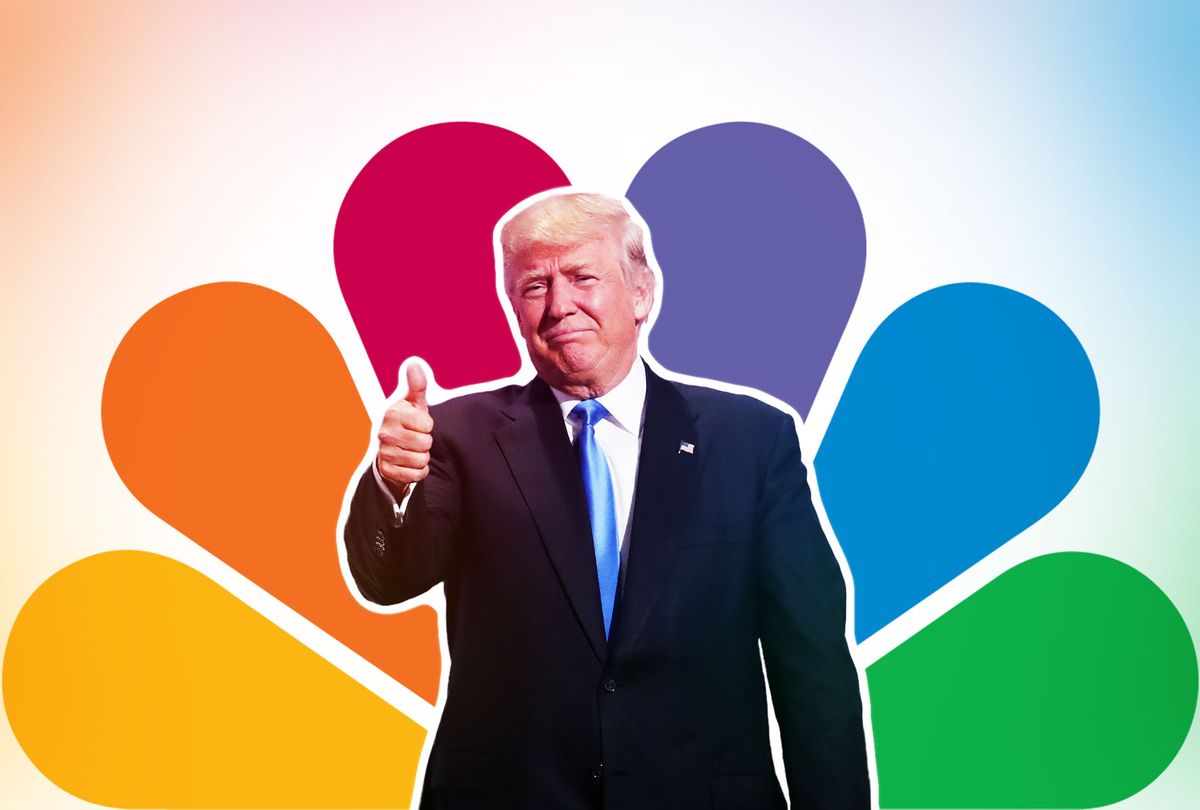 Never forget that when it comes to the phrase "news business" the word that carries the most weight is "business."

Speaking of which – and not coincidentally – avid fans of "The Apprentice" in its heyday may recall Donald Trump's second-favorite catchphrase, after "you're fired", was some variation of, "It's nothing personal, it's just business."

There's a lot that's wrong about that phrase, especially when it comes to actually doing business. People who hew to that philosophy have no problem running roughshod over anyone in their path, be they competition, subordinate or peer. It's a terrible business strategy, which makes it fitting that a notoriously terrible businessman claims it as a mantra. Another fun fact: the phrase is said to have been originated by a renowned New York City mob accountant known as Otto "Abbadabba" Berman, a guy who was eventually gunned down in a hit ordered by Lucky Luciano.

History aside, that crooked axiom also explains why NBC agreed to host a town hall-style event in Miami starring Trump in response to ABC scheduling a town hall featuring his Democratic challenger Joe Biden. Both are set to take place at 8 p.m. ET on Thursday, Oct.15. The response from anyone who still naively believes that NBC's News division should be in the business of serving public interest was disbelief and outrage that NBC would force viewers to choose between watching one candidate's event or the other when the network could have chosen another time or an entirely different day.

I get it. I really do. Those people aren't wrong. This is move is terrible for democracy.

But please understand the operating paradigm when it comes to the people making these decisions. For years now NBC has been vehemently criticized for constructing the illusion of Trump as a successful businessman via "The Apprentice" when the reality captured in reams of documentation proves he's anything but.

By now, NBC doesn't care if the audience is offended by its decision to counterprogram Trump against ABC, its competition. If the content Trump serves the public is bluster, lies and possibly dangerous incitements to violence, so what? NBC is counting on people tuning in to see if he does that. Higher ratings lead to high advertising rates.

Naturally the mechanics of that game are stacked against the Democratic nominee since NBC's revival of the Trump show will also air on NBC, MSNBC and CNBC, and one presumes its host, "Today" personality Savannah Guthrie, will do what she can to rein him in. (Based on Chris Wallace's attempts to wrangle Trump in the first and possibly only presidential debate of this cycle, she has our thoughts and prayers.) Sadomasochists will also have access to on demand streams of the broadcast via Peacock, its new streaming service.

In the meantime on ABC, "Good Morning America" host George Stephanopoulos will be doing his part to manage Biden during its 90-minute telecast. That has to be a far less onerous task.

What about the news? What about journalistic obligation to dispense facts and refrain from the harmful business of "both-sidesing" situations such as this? Again, this conflates journalism with the news business. Regardless of the medium in which they ply their craft, journalists are in the business of serving the public's interests first as opposed to the bottom line of the corporations that own their newsrooms – Comcast's NBC Universal in the case of NBC, Disney with ABC.

But this year, between the pandemic, widespread civil unrest in the streets and a tumultuous election that this administration is actively undermining, network news has once again become an important part of each network's business – and ABC's "World News Tonight" with David Muir has overtaken "NBC Nightly News with Lester Holt." In fact, ABC's evening newscast won the 2019-2020 season in total viewers, adults 25-54 and adults 18-49 for the first time in 24 years.

In response NBC is opting to continue a poisoned relationship it can't seem to quit for love or money, but mostly for money.

This week The Hollywood Reporter published an account that lays out all the ways that the relationship between Trump and NBC was reciprocal for many years; he milked them for extra payouts to his alleged "charity" that has since been discovered to be a fraud, and for a while he gave them a destination series in "The Apprentice" that rivaled CBS's success with "Survivor," both of which are produced by Mark Burnett.

And NBC properties bolstered Trump's political ambitions by promoting him on its series. "Saturday Night Live" invited Trump on to host a few months after he announced his candidacy for president – which is to say, after he publicly declared that that Mexicans were rapists bringing crime and drugs into our country.

On  "The Tonight Show" Jimmy Fallon played with whatever it is that's resting on top of Trump's skull. These are two examples of many appearances that were part of the estimated $5 billion in free media the current president received when he was a candidate in 2016. And Trump knows this. On Thursday morning he told a crowd gathered at a North Carolina rally that despite his opinion that NBC is "the worst," "I figured, what the hell, we get a free hour on television." He also mocked Guthrie because, why not.

Thursday night's NBC-ABC face-off is the result of Trump refusing to take part in a "virtual" second event organized by the Commission on Presidential Debates following his hospitalization for COVID-19.

With the state of Trump's contagiousness as questionable as his relationship with the truth, the Commission scrapped the second in-person debate scheduled for this week despite Trump's insistence that he was well enough to appear.  Hence Biden's decision to move forward with an ABC-hosted town hall.

Now, one might argue that NBC is simply doing its part to follow some version of the FCC's "equal time" rule, except one wouldn't be considering that NBC isn't in doing this to inform and assist the public or to assist ABC in said aim. Remember, in this business ABC and NBC and Trump are in it for the same thing, which is ratings.

Time and again throughout his presidency Trump trumpeted his belief in the importance of ratings above all else. He crowed about Arnold Schwarzenegger's lower ratings debut as the new host of "Celebrity Apprentice" at his first National Prayer Breakfast as president, in 2017.

Later that year he pardoned criminally corrupt former Maricopa County Sheriff Joe Arpaio before he was to sentenced for his conviction for contempt of court, as Hurricane Harvey threated the coast of Texas, because "in the middle of the hurricane, even though it was a Friday evening, I assumed the ratings would be far higher than they would be normally." On Wednesday he bragged to his audience in Des Moines, Iowa that his election victory in 2016 was the highest rated event in television history; it was not. It doesn't even rank among the top 10 most watched programs of the last decade.  (It tied with the viewership for the combined TV coverage of 2008's election results for the highest election night ratings in broadcast history.)

Ratings are an estimate of audience size and attention, the air this president wheezes. That's why you can't get away from him.

And NBC's agreement serves Trump in another vital way in that it allows him to circumvent the bad news reflected in poll numbers that show him trailing Biden by a double-digit margin.

Now, if the ratings go his way, Trump will tout Thursday's cumulative viewership tally compared to whatever audience Biden gets as evidence of how America really feels about him and another data point to cite as proof of a rigged election if he loses.

Maybe that publicity will shift the numeric odds in his favor in spite of the fact that little else has so far. Or Trump, NBC and ABC could very well discover that people are tired of seeing and hearing from this president, or his contender, or really anything election-related until Nov. 3 passes.

Either way, don't waste your energy or mood by taking umbrage at this. To do so is to take things personally – and this is business. It was never about any of us.