AOC just delivered a live-stream of her playing a video game. Here's why this is a big deal

Rep. Alexandria Ocasio-Cortez may be the only congressperson who streams gameplay. She is unlikely to be the last 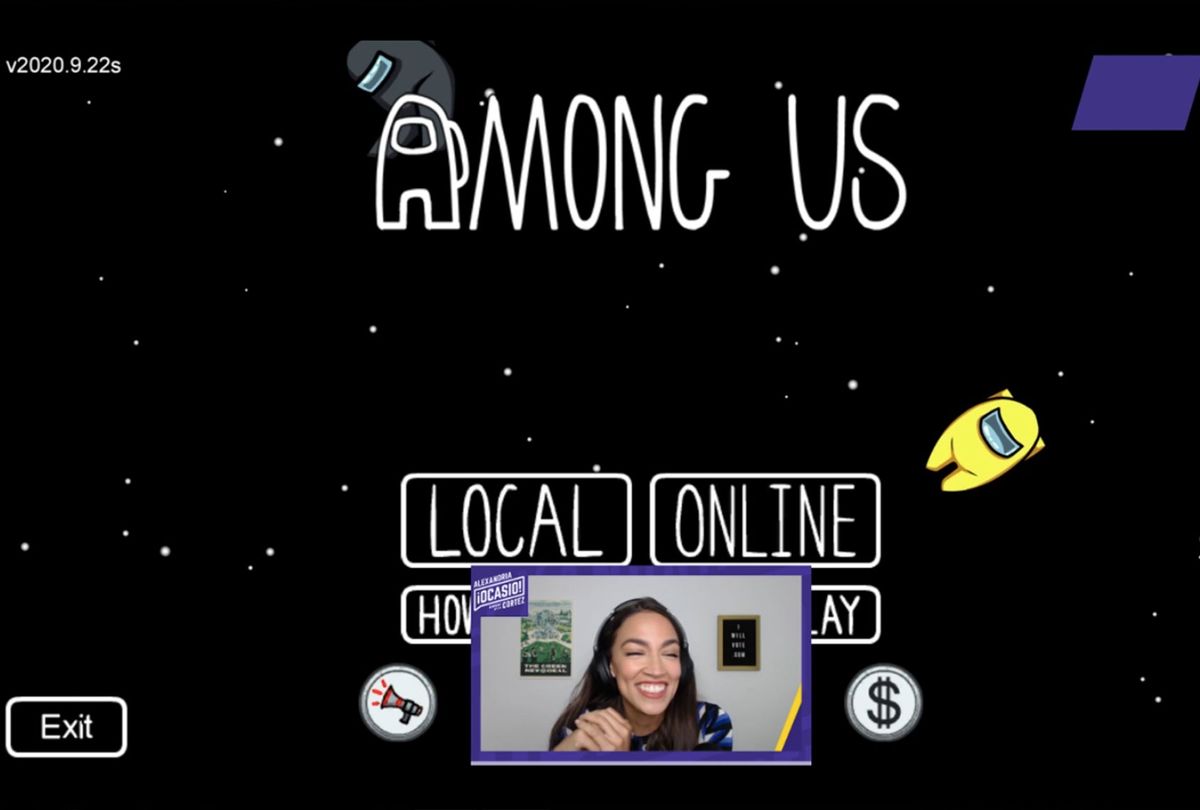 When Rep. Alexandria Ocasio-Cortez, D-N.Y., live-streamed herself on Twitch playing the video game "Among Us" Tuesday night, she did more than simply blow off some steam while encouraging people to vote. She also demonstrated that video games and politics intersect in important ways — and that those intersections are likely to only grow stronger in the future.

Twitch, for those unfamiliar with the Amazon subsidiary, is a video social media site that allows ordinary users to post content of themselves live-streaming games. The popular platform is widely associated with gamer culture, as video gamers all over the world use the site to not only play games together but to engage in conversations about a diverse range of subjects. According to Statista, Twitch had more than 7.4 million active streamers last month, and an enormous number of viewers tuned in to watch Ocasio-Cortez's gaming. At its peak, her stream had roughly 435,000 viewers, making her broadcast one of the 20 biggest Twitch streams of all time. She was joined by Rep. Ilhan Omar, D-Minn., as well as famous Twitch users like Disguised Toast, DrLupo, Hasan Abi and Pokimane. By most accounts, she played the game pretty well — nowhere near at a professional level, to be sure, but competently enough to demonstrate that she is familiar with gaming.

Ocasio-Cortez is not the first political figure to recognize the potential in Twitch. Sen. Bernie Sanders, I-Vt., joined the platform last year, and President Donald Trump's account was temporarily suspended in June after the company accused him of using it to spread hate. (Trump's account posted a video of a speech in which he claimed people of Mexican descent are more likely to be rapists and criminals, and a Twitch spokesperson told Salon at the time that "hateful conduct is not allowed on Twitch.")

Part of Twitch's appeal is, of course, the fact that it is a popular internet platform, and as such can be used to spread political messages much as users do so at sites like Facebook, Twitter, YouTube and Reddit. Yet Twitch is distinct among internet platforms precisely because of its close association with gaming culture, which has also been politicized in recent years. This is hardly surprising, given that a substantial percentage of the world's population plays video games. According to Statista, there were almost two billion video gamers on the planet as of 2015, and that number is expected to reach more than three billion by 2023.

Ocasio-Cortez herself is no stranger to gaming, as she made a surprise appearance last year during a live stream of a 50-hour marathon game of "Donkey Kong 64" to raise money for a transgender youth advocacy organization. Last month former Vice President Joe Biden, who is running against Trump in the upcoming election, launched online merchandise on the Nintendo Switch video game "Animal Crossing: New Horizons." Christian Tom, director of digital partnerships for the Biden-Harris campaign, explained the campaign's decision by telling USA Today that "Animal Crossing is a dynamic, diverse, and powerful platform that brings communities together from across the world. It is an exciting new opportunity for our campaign to engage and connect Biden-Harris supporters as they build and decorate their islands."

Still, despite the ubiquity of video gaming, major politicians seem to have sclerotic attitudes about gaming and those who engage in it. Earlier this year, Biden told The New York Times about how, during a meeting with Silicon Valley business leaders, "one of the little creeps sitting around that table," whom the former vice president described as "close to a billionaire," characterized himself as "an artist because he was able to come up with games to teach you how to kill people." Biden later made it clear that the "little creep" in question was specifically referring to video games.

Trump has expressed a similar prejudice toward video games, commenting to reporters after mass shootings in Ohio and Texas that "we must stop the glorification of violence in our society. This includes the gruesome and grisly video games that are now commonplace." (In fact, research has repeatedly found that there is no scientific link between video game violence and its real-world counterpart.)

Yet Trump, and the right generally, has also politically benefited from trends in gamer culture. As Salon's Amanda Marcotte wrote in 2016, the 2014 controversy known as Gamergate — one in which feminists were widely harassed by video gamers — helped lay the groundwork for Trump's successful 2016 presidential campaign.

"It's not just that Republican presidential nominee Donald Trump and his acolytes are playing to the same grievance about 'social justice warriors' who dare to think that white men should share power with women and people of color," Marcotte wrote. "It's that Trump and his men are using the same tools as the Gamergaters: gaslighting, projection, working the refs and leaning heavily on often subconscious double standards that allow white men to have more benefit of the doubt than others."

With Biden and Trump, it is likely that their comments on gaming culture are calculated, efforts made by septuagenarian men to interact with a nascent element of American culture that they may not fully understand. For younger generations who are more likely to have grown up playing video games, gaming has long been fertile breeding ground for political discourse. Now, with platforms like Twitch, it is a tool for reaching millions. Ocasio-Cortez, as a Millennial, clearly understands this. As more Millennials and Zoomers become politicians, Twitch streams may become a standard piece of any campaign trail or get-out-the-vote operation.