Social media platforms are taking a stand against Trump and racism... and that's a very good thing for freedom 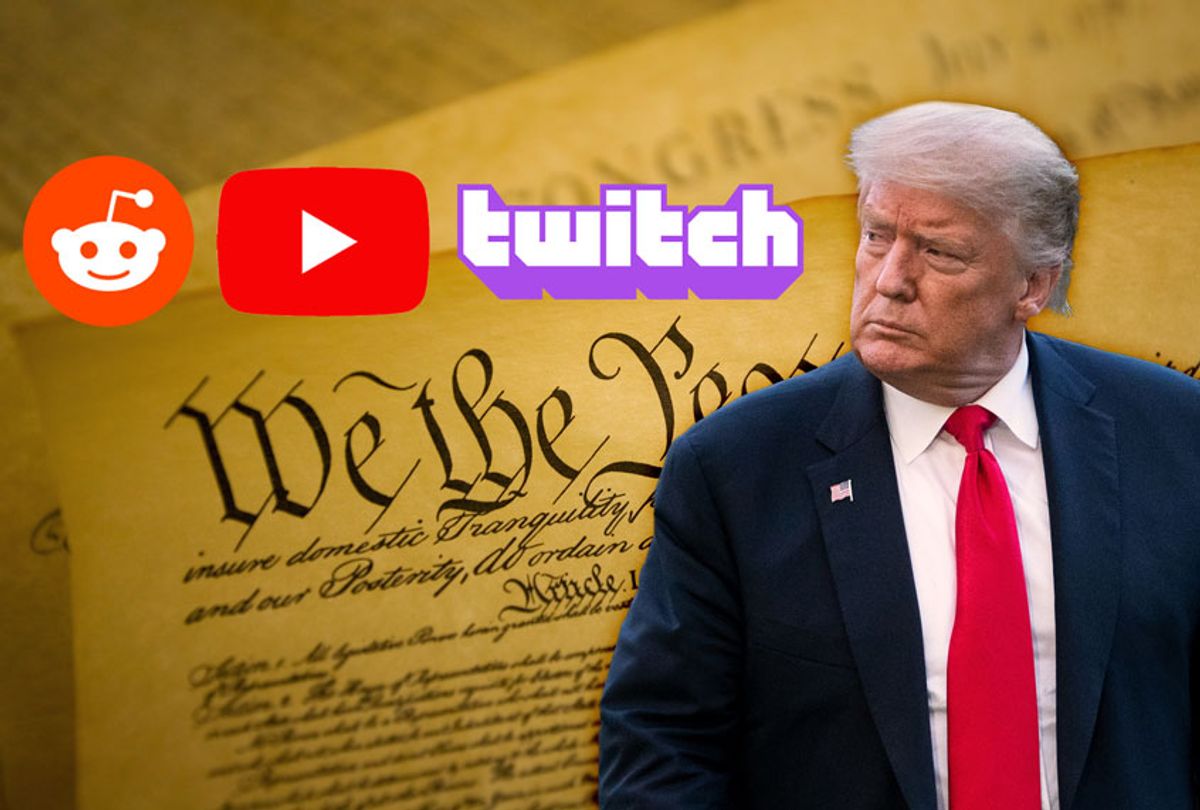 Freedom is impossible for everyone when viewpoints prevail that dehumanize anyone. And it appears that several big social media platforms agree, judging from recent bans or suspensions of racist accounts across YouTube, Twitch, and Reddit.

For those who are dehumanized — whether by racism, sexism, classism, ableism, anti-LGBTQ sentiment or any other prejudices — their voices are diminished or outright silenced, and in the process they lose their ability to fully participate in our democracy. We all need to live in a society where hate is discouraged, discredited and whenever possible scrubbed out completely from our discourse. This doesn't mean we should label all ideas as hateful simply because we disagree with them; to do that runs afoul of President Dwight Eisenhower's famous statement, "In a democracy, debate is the breath of life." When actual hate enters the dialogue, however, it acts as a toxic smoke in the air of debate, suffocating some voices and weakening the rest.

This brings us to a series of recent decisions by big tech companies:

Twitch, a popular video streaming service associated with the gaming community, temporarily suspended President Donald Trump's account because the company claimed it violated their policies on hate. Trump had posted a video of a speech claiming undocumented Mexican migrants are more likely to be rapists and criminals, as well as a video in which he spoke hypothetically about "a very tough hombre" breaking into the house of a "young woman."

"Hateful conduct is not allowed on Twitch," a spokesperson for the company told Salon. "In line with our policies, President Trump's channel has been issued a temporary suspension from Twitch for comments made on stream, and the offending content has been removed."

Similarly, YouTube banned several explicitly white supremacist channels for hate speech including those associated with American Renaissance, David Duke, Stefan Molyneux and Richard Spencer. In addition, Reddit banned a popular pro-Trump forum called r/The_Donald along with roughly 2,000 other forums, including the prominent left-wing community r/ChapoTrapHouse. And this doesn't even include Trump's current war with Twitter, one that culminated in him retaliating against the company and threatening free speech.

"We have strict policies prohibiting hate speech on YouTube, and terminate any channel that repeatedly or egregiously violates those policies," a spokesperson from YouTube told Salon in a statement. "After updating our guidelines to better address supremacist content, we saw a 5x spike in video removals and have terminated over 25,000 channels for violating our hate speech policies."

Reddit referred Salon to a statement explaining,"We committed to closing the gap between our values and our policies to explicitly address hate" and that "ultimately, it's our responsibility to support our communities by taking stronger action against those who try to weaponize parts of Reddit against other people."

No one who understands Constitutional law can argue that these corporate decisions violate the First Amendment, which only protects speech from government repression. Professor Rick Hasen at the University of California, Irvine Law School told Salon by email that "private companies running websites are not subject to being sued for violating the First Amendment. The companies are private actors who can include whatever content they want unless there is a law preventing them from doing so."

UCLA School of Law Professor Eugene Volokh echoed Hasen's observation, but then encouraged Salon to evaluate the issue from a different point of view through a thought experiment.

"You might say there are broader free speech principles that are being violated here, though that of course is not a legal argument," Volokh said. "That's an argument you might think of in Harvard's context as being about academic ethics, that academic institutions shouldn't try to censor speech to or by their students. Likewise, you might say this is a matter of kind of media ethics, and in particular, that a platform like Twitch or like YouTube or like Facebook shouldn't restrict important speech that people are trying to convey."

This is where I must respectfully disagree with this argument. And to explain why, I must make reference to personal experience.

When I was 12 years old, I was nearly murdered in an anti-Semitic hate crime. For the next 18 years, I rarely experienced anti-Jewish prejudice, but when Trump's presidential campaign was gathering steam and he made anti-Semitic comments during a speech, I felt the need to speak out against them. In response, Andrew Anglin — the same prominent neo-Nazi who later became infamous for mocking the death of leftist protester Heather Heyer for speaking out against the bigots at Charlottesville — wrote an article that attacked me in an anti-Semitic fashion. I was described as a "Jew parasite" and a member of an "evil tribe," while others who circulated the article called me a "demonic kike" and "filthy Jew rat."

Two years after that, I was harassed and doxxed by a white nationalist who posted anti-Semitic memes on my Facebook page because I wrote an article criticizing Trump. After I figured out who he was and asked him for an interview, he doxxed me and lied by saying he had only criticized Israel (the article he challenged had nothing to do with the Middle East).

I tell these stories because, after each of those incidents, I wound up on the receiving end of some of the most vile attempts at bullying and intimidation that I've ever experienced. The people who did these things did not do so because they wanted to engage in an honest debate, or because they merely disagreed with me about specific issues. They had decided that, because I am a Jew, they had a right to demean me and strip away my humanity simply for expressing views that they did not share. From the perspective of a bigot, people who are not members of the groups they deem worthy of respect should be grateful for whatever rights their would-be (or actual) oppressors are willing to give them. If that means they get none at all, including the right to life, then so be it.

Ethically speaking, media platforms have a responsibility to create a culture in which all voices are welcomed. There should be a diversity of people and a diversity of viewpoints, with the only restrictions being on thoughts and words that could limit one or the other. It is for this reason that kicking those racists off of their platforms doesn't make us less free, but more so.

I will close by noting the response of Raheem Kassam, a former Breitbart News London editor-in-chief who co-hosts a podcast with former Trump adviser Steve Bannon. When I asked for his views, he replied, "Imagine running a company and not understanding the unnecessary risk you're taking with people's jobs and livelihoods by taking partisan positions against someone who – if re-elected – is going to pursue you with the full force of the U.S. government for censoring conservatives. Live by the sword, and all that . . ."

To Kassam, I would reply with the actual text of the First Amendment:

"Congress shall make no law respecting an establishment of religion, or prohibiting the free exercise thereof; or abridging the freedom of speech, or of the press; or the right of the people peaceably to assemble, and to petition the Government for a redress of grievances."

Trump threatening to use the government power to retaliate against those companies, on the other hand, is a threat to both the letter and the spirit of the First Amendment. He and his supporters are not being stopped from disseminating their views on other platforms, and Trump himself is one of the most powerful people in the world. When they talk about getting back at those who hold them accountable, it isn't because they care about free speech. In fact, Trump has engaged in various wars against free speech. It is because they don't want to be held accountable for what they say.

A nation founded on the principle of human equality, and depends on a quality marketplace of ideas in order to flourish, deserves better than this. And my hope is that Trump will someday realize that good leadership comes not from avoiding accountability, but by embracing it. To quote a popular superhero movie in which Captain America sounded so much like Trump (which I criticized at the time) that he needed to be checked by Iron Man, his refreshingly intellectual counterpart:

"If we can't accept limitations, we're boundaryless, we're no better than the bad guys."