Kellyanne Conway is being paid $15,000 a month by the GOP following her White House exit: filings

Former White House adviser Omarosa Manigault-Newman was offered $15,000 when she left the administration 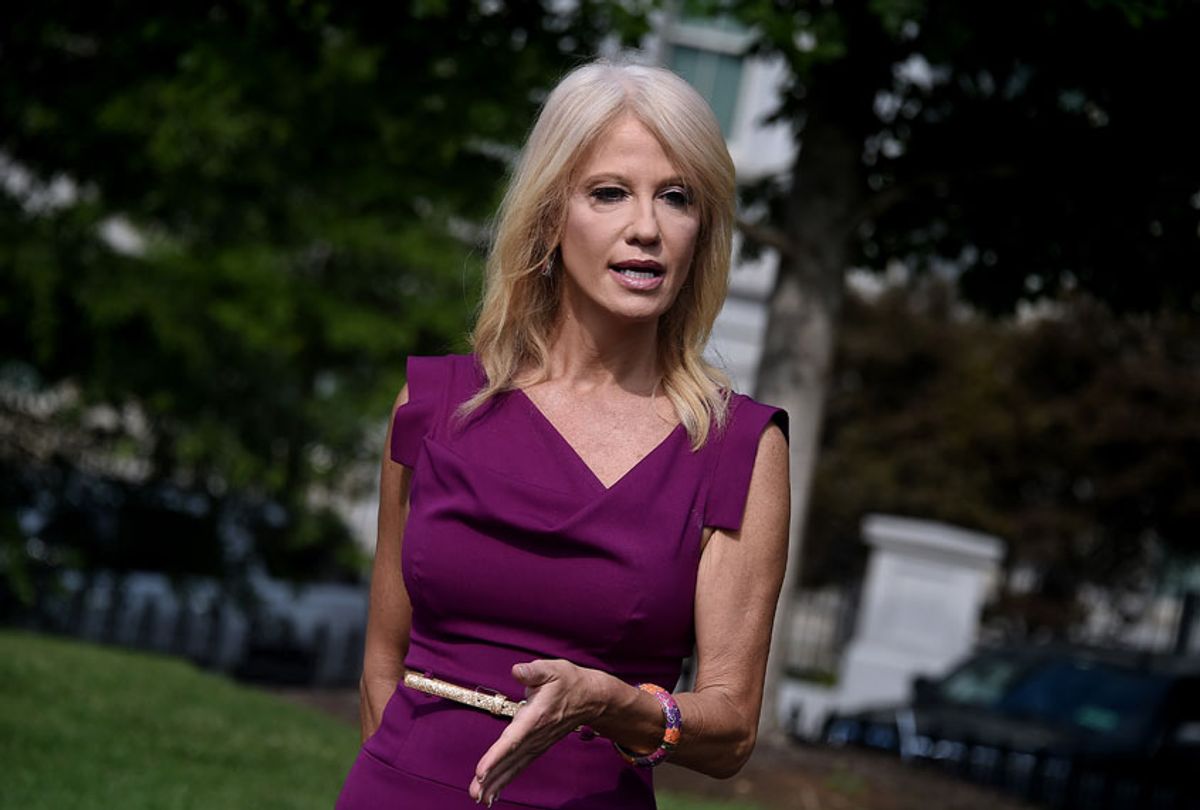 Counselor to the President, Kellyanne Conway, talks to reporters outside the White House, on August 6, 2020 in Washington, DC. (OLIVIER DOULIERY/AFP via Getty Images)
--

Citing a need to devote time to her family, Kellyanne Conway announced her departure from the Trump administration only one month ago. Nonetheless, the Republican National Committee is paying the former White House counselor $15,000 a month, according to new federal filings.

Conway left the White House in late August amid a publicly unfolding family drama after her daughter declared her intention to seek emancipation over alleged "trauma and abuse" in multiple social media posts. In an exit statement, Conway said she would be stepping down "gratefully" and "humbly."

Her husband, the attorney George Conway, simultaneously announced that he would withdraw from his role as chief agitator at The Lincoln Project, a big-money group of conservative Trump critics, to "devote more time to family matters."

"We disagree about plenty, but we are united on what matters most: the kids," Kellyanne Conway said of her husband in her statement, adding: "For now, and for my beloved children, it will be less drama, more mama."

Kellyanne Conway, who carried Trump's 2016 campaign over the finish line before assuming a role as the administration's most facile TV sophist, would bring a range of experience and insight in national politics. But the scope of her Republican National Committee responsibilities is unclear. The veteran pollster was paid for "political strategy services," according to Federal Election Commission (FEC) filings released on Friday.

The monthly amount — $15,000 — is the equivalent of a top White House salary. Indeed, Kellyanne Conway previously earned almost the same amount during her time at 1600 Pennsylvania Ave. It's also a common monthly salary handed out by the GOP to former officials who exit through the Trump administration's revolving door.

Filings show the RNC still pays $15,000 a month to former presidential security chief and Trump bodyguard Keith Schiller — originally for "security services" connected to the 2020 Republican National Convention, which has since come and gone. The new records also show a $20,000 Oct. 13 expenditure to Pinkerton, the famed private investigation and protection agency, also for "security services."

The GOP paid that same $15,000 monthly stipend to Ric Grennell after he left the Trump administration, but the latest round of filings reveal the chief Republican LGBTQ+ adviser got an unexplained October bump to nearly $22,000.

The Conways own a New Jersey beach home, as well as an $8 million mansion in the posh Kalorama neighborhood of Washington, which their teenage daughter, Claudia, often features in social media videos.

Claudia Conway, an outspoken critic of the president and her mother's work with the administration, said she was "devastated" that her mom was speaking at the Republican National Convention. She claimed in August that she was "officially pushing for emancipation" from her family "because of years of childhood trauma and abuse." She celebrated her mother's resignation from a job which allegedly "ruined" her life.

"Look what I did!" she said in a TikTok video at the time. "Look at what I did, ladies and gentlemen."

The Conways, who are former Trump Tower residents, have long been the subject of media fascination ever since George Conway, who interviewed for a top job at the Department of Justice early in Trump's presidency, became a leading critic of his wife's boss. Kellyanne Conway told The Washington Post in 2018 that she found her husband's criticisms to be beyond "disrespectful."

"It's a violation of basic decency, certainly, if not marital vows," she told the outlet, before trying to strike the conversation from the record.

In August, Kellyanne Conway said that she anticipated taking on a "significant role" in Trump's 2020 campaign, according to The Washington Post.

The Republican National Committee awarded Kellyanne Conway a top speaking slot this August at its convention in Washington, which stirred controversy for numerous likely violations of the Hatch Act, a law prohibiting federal employees from engaging in political activity. Conway was accused of violating the Hatch Act more than 50 times before 2019 — on Twitter alone. In 2018, the Office of Special Counsel ruled that she had violated the law on two occasions, but the White House let her off the hook.