Raising a Black son in a white world

Is my job as his mother to make him feel better or tell him the truth? Neither path is ideal 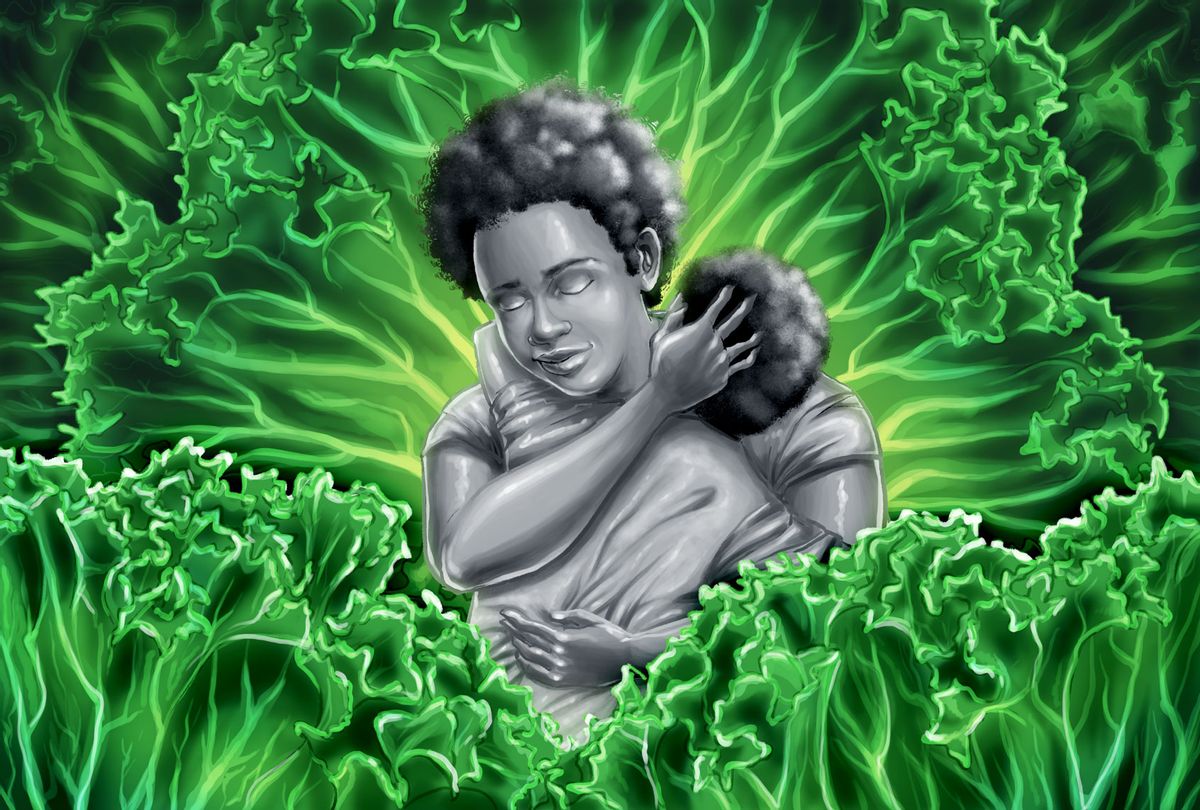 A week into my hunger strike to protest the food apartheid practices of Kroger, a major grocery chain, last month, my son looked up from his Oops! All Berries with an expression I wasn't used to. We were sitting at our tiny brown kitchen table in cheap, uncomfortable chairs. I didn't have the energy to make a hot breakfast, so he was chewing cold cereal with his mouth wide open. His little brown face was accented by a forehead wrinkled with concern, and his walnut-shaped eyes threatened to flood with tears.

"Mommy, did Kroger stop being racist yet?" he asked me.

I didn't know the best way to respond. Those glossy eyes were contagious. My little boy is only seven, but I've always tried to be real with him. He understands that Santa Claus doesn't exist — mom buys those gifts. I try to encourage questions in situations that some parents would consider grown folks' business. Being a socially conscious parent means I am perpetually disappointed in my shortcomings. How could I explain that corporations like Kroger will never stop being racist? Should I break it to him now that plantation capitalism's existence depends on the sustainability of anti-Blackness? Is my job as his mother to make him feel better or tell him the truth? Neither path is ideal. And to be honest, I won't be that good at either one.

When my hunger strike started, I read about dehydration prevention and fatigue. I consulted with several medics about the changes my body might go through while I attempted to hold Kroger accountable for its role in food apartheid in our community. It was clear as I struggled to find an adequate answer that I hadn't done enough to prepare my son for this moment.

And what would my mother have done in this situation? She too was a victim of institutional racism. When she was diagnosed with lung cancer, her pain was imaginary in the eyes of doctors she visited. She passed away in 2010, while I laid next to her in bed on Easter. I don't have the luxury of getting her advice about how to explain racism to my son.

"Mommy, did Kroger stop being racist yet?"

This wasn't the first time he expressed concern about me during the hunger strike. He asked why I took so many naps and why we hadn't been to the park. The night before, he offered me some of his drink and told me it was food, so I should be able to have some. Later that night when he listened to his sleepy story, he heard my stomach growl and told me I should eat something. Children are more observant than we give them credit for.

I'm rarely speechless, but I needed a moment to collect myself. This piercing question came weeks before Kentucky Attorney General Daniel Cameron tried to delay the release of information from the grand jury proceedings and trade Breonna Taylor's life for a potential spot on the Supreme Court. It came months after Kenneth Walker attempted to protect Breonna Taylor as unannounced intruders burst into their apartment with a battering ram. That kitchen table felt like the barrier between my son's innocence and his realization that the whole world is racist.

Am I raising a Daniel Cameron or a Kenneth Walker?

Little Black boys are forced to make choices earlier than other children. I want my son to see endless possibilities for his future — engineering, art, aeronautics. But I also want him to instinctively keep his hands in plain sight when approached by a police officer. Teaching him one of these skills may foreclose the other.

I'm scared that if I focus on his dreams and potential, he'll be too naive to survive a police encounter. If I spend my energy helping him navigate an anti-Black world, he may be too jaded to pursue something he loves.

And I don't know what I'm doing. I know that universally, no parent really knows what they're doing. But the stakes are higher with a Black child. Black boys are not afforded the luxury of second chances and the benefit of the doubt. Instead, they're victims of ignorance and assumptions. I remember when Trayvon Martin was killed. My son was still a thesis yet to be conceived on February 26, 2012 when George Zimmerman gunned him down. Trayvon was 17 years old. When my son was a little over a year old, Tamir Rice was killed by police. Tamir was 12 years old. What is the threshold for safety? How young is too young to be gunned down for Black skin? Unfortunately, as Dr. Brittney Cooper writes, "white America will use 'objectivity' to justify the murder of Black children."

I desperately wanted to explain to my son that none of these corporations would stop being racist as long as racism continues to incentivize white mediocrity. He is the most important person in my life, but I can't even give him the gift of safety in these spaces. Ignoring the reality of white supremacy is tantamount to wanton endangerment. Or at least neglect.

There is no fun, engaging, interactive way to talk about race and white supremacy. I scroll through my white friends' social media posts and see them offer easy ways to discuss race. But we shouldn't seek easy ways to have the conversation — that is a set-up for failure.

"The world is anti-Black, kiddo."

"If it was up to Kroger I would starve to death."

"Our only hope is to burn it all down."

None of those possible responses felt right. So I told him that they were still racist, but some people started paying attention, so they would get in trouble for being racist. That probably wasn't the best answer. But I can't control everything that happens outside our home. It is irresponsible and impossible to protect him from everything. Instead, I've shifted to providing a safe space for him to be curious and vulnerable. If the world is against him, my duty is to be for him. There are so many Black boys and men who are starved for joy, so that is my contribution to his life. I am committed to this version of revolutionary parenting. So even if Kroger never stops being racist, my son will neither give in to crippling nihilism nor give up his joy.

In response to the hunger strike, Kroger promised to increase resources for their two Louisville locations that serve predominately Black neighborhoods. They've also been in talks with local Black farmers about adding them as vendors. The company still hasn't admitted to their role in the food apartheid and they continue to enforce a heavy police presence at their West End locations. But that's the thing — this country's main export is racism. That does not dictate how I move through the world as a mother. Instead, my motherhood is predicated on being a safe space for my son to express all the feelings that are silenced when he leaves the house. My love for him is more fierce than white supremacy's hatred of him. That love is my most revolutionary contribution to the struggle.

Shauntrice Martin is an abolitionist and mother who founded #FeedTheWest and Black Market KY to combat the food apartheid in Louisville, Kentucky. She has written about politics and culture for Taji Magazine, SELF Magazine, & Courier Journal. Shauntrice has earned numerous awards including Louisville Forty Under 40, The Coalition of Black Excellence Impact Award, and Silicon Valley Business Journal Woman of Influence.