No justice, no feast: How hunger strikers are keeping the protest over Breonna Taylor's death alive 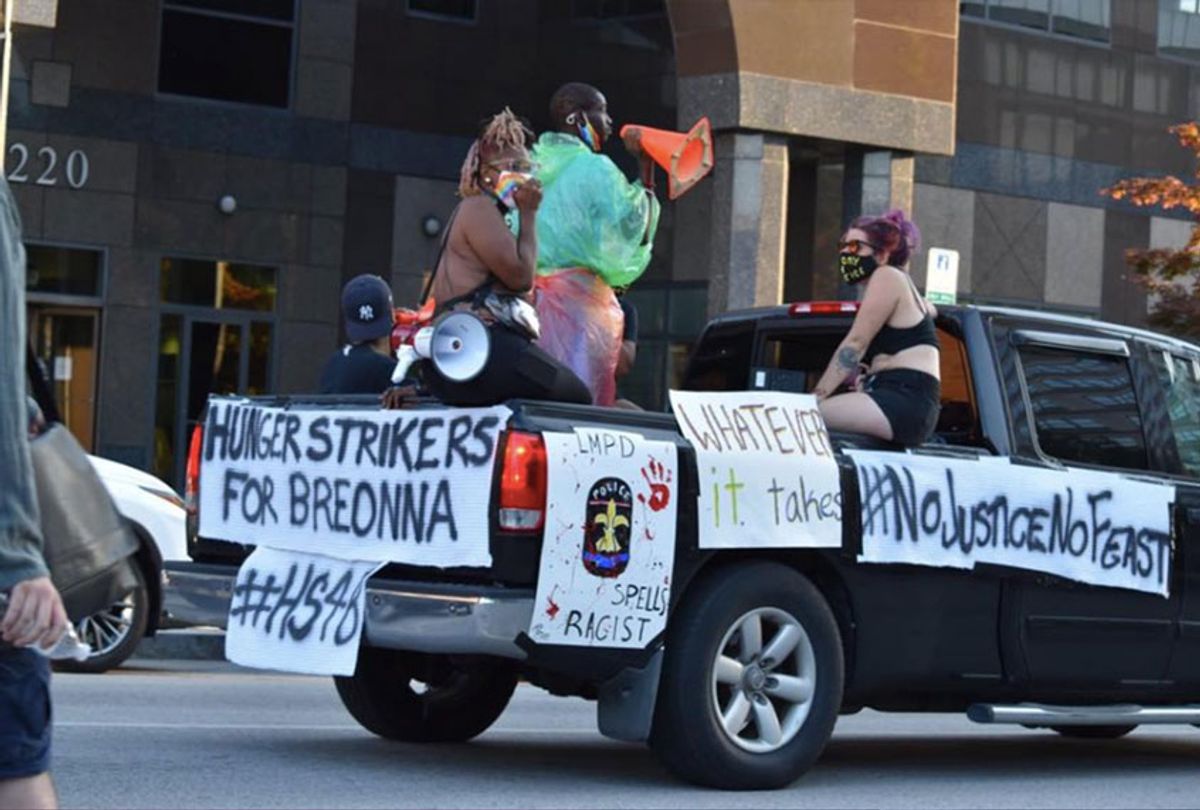 LOUISVILLE, Ky.—It's mid-August when group of four protesters sit at a long dining table in front of rows of glistening triangles of watermelon stacked on paper plates. As they bring the fruit to their lips, cameras click. This is the first time two of them have eaten in 25 days.

On July 20, the four protesters announced they would abstain from caloric intake until all three officers involved in the shooting were fired from the department (Hankison was terminated in June and is appealing) and stripped of their pensions. That hasn't happened, but that first bite of watermelon symbolizes a lot: the end of one hunger strike, the beginning of several more and the necessity for both in a city that continues to call for justice.

When I first visited the Hunger Strikers for Breonna Taylor last month, the protesters were only five days into their strike. They were staying in an Airbnb about a mile from Churchill Downs, the famed race track where the annual Kentucky Derby is held. It's a small, muted green house with two bedrooms and a communal living room, which quickly became a tangle of wires and computer cords as the group started navigating several live streams and frequent Zoom calls.

The kitchen was, as expected, pretty bare, save a selection of herbal teas and coffees, some vitamin packets and a sinkful of reusable water bottles in need of refilling. Bryant, 27, and Ibsershoff, 29, speak with me on the sun-soaked back porch

"There are four of us physically fasting; that is our core group," Bryant said. "Then we have a good amount of support. There are those who are handling public things like media, the live streaming, finances . . . "

"Medical team," Ibershoff adds. "And then researchers who are helping us keep up with things, helping keep our message on point and understanding the power structures in Louisville."

Hunger strikes have a long legacy as a form of nonviolent protest, with documented strikes as early as 750 BC. Irish Republicans, Cuban dissidents, suffragettes, ICE detainees and Guantánamo prisoners like Khalid Qasim and Ahmed Rabbini all engaged in hunger strikes as a way to advocate for some kind of legal, social or political change.

As Falguni A. Sheth, a professor of philosophy and political theory, wrote in her paper "Unruliness without Rioting: Hunger Strikes in Contemporary Politics," the hunger strike can be seen as a "technology of political resistance" wielded by vulnerable populations against sovereign power.

"Through the use of hunger strikes — especially in grievous cases where subjects have no other recourse, perhaps because the technology of a human rights framework is denied them — 'life,' understood as a resource, can become the currency of communication or negotiation for those who are in ajct political positions such as long-term prisoners or those who are subjected to solitary confinement," Sheth wrote.

She continued: "It is possible, then, for prisoners to deploy hunger strikes in order to battle sovereign power — even if not always successfully."

In the case of the Hunger Strikers for Breonna, they were protesting a political system that diminishes the personhood of Black individuals, especially Black women.

"It's completely worth it to put my body on the line if that could hold attention and result in accountability, which will maybe result in greater change and less of a chance of this happening in the future," Ibershoff said. "This did not begin the day Breonna Taylor was shot."

But, Bryant said, a hunger strike is less visible than other forms of protest, which is why the group decided to livestream their efforts.

"This is a movement that is not very naturally 'in your face,'" she said. "It's not like a march, it's pretty much the opposite of screaming outside someone's apartment building, and in order to keep us relevant, it's the best way for people to keep up with what we are doing."

It was also a way for the group to stay accountable to their stated mission of abstaining from calories, especially as the hunger strike wore on. At the time, both Ibershoff and Bryant said they were feeling fine; they had some headaches and tiredness, but otherwise said their bodies weren't really feeling the effects of fasting yet.

Over the next 20 days, the members of the Hunger Strike house would pass in and out of the frame of the live stream. They would also provide regular updates via Facebook Live. Initially, their check-ins were buoyant; they still weren't feeling the effects of the calorie deprivation yet.

They occasionally had visitors, like from their medical team, comprised of several healthcare professionals who also volunteered at Jefferson Square Park, the meeting place for the protesters who have been conducting marches in Louisville streets since late May. The protesters also organized live Zoom calls with area activists, like ACLU Kentucky policy strategist Keturah Herron and state Rep. Attica Scott.

By about the 10th day, there were signs that the protesters' energy was flagging. In their videos, they were moving more slowly and seemed fatigued. But their message stayed consistent; they wouldn't eat until there was movement on the Breonna Taylor case. Soon, the team adopted the hashtag #NoJusticeNoFeast.

Throughout their strike, the protesters also consistently reached out to Louisville mayor Greg Fischer asking him to meet or communicate with them about the goal of their movement.

In an Aug. 9 Facebook post, the protesters wrote: "Our bodies are weak, but we know our community is stronger than ever. We are asking you once again to lift us up. Please call Greg Fischer's office and ask that he address the individuals on hunger strike in his 'compassionate city,' Ask him just how much blood he's willing to allow be spilled in his name."

He did not respond to their — or Salon's — requests for comment on the strike.

Eventually, Gonzalez ended his strike after 15 days, while Bryant ended hers soon after in recognition of Black August, a movement that honors Black individuals who have been killed fighting injustice throughout history. Ibershoff and Maybe remained.

By the protesters' 25th nightly update, it was evident that the hunger strike had taken a serious physical toll. Ibershoff and Maybe huddle on the couch, wrapped in blankets despite the 90-degree temperatures, while speaking to the camera.

"I had trouble sleeping last night because it seems like my circulation has kind of changed and it seemed like my extremities would just go numb in turn," "Ibershoff said. "My hands, my foot, my . . . I just woke up stumbling and lightheaded and sick to my stomach, but it's been a slow descent to get here."

Maybe responds that she had vomited the day before and had lost 19 pounds.

"I was hypotensive this morning, and last night my heart rate was 130," Maybe said. "That's not good when your blood pressure is low, but your heart rate is high, so . . ."

Both reported a strange, prickly feeling in their muscles.

The next morning, the Hunger Strikers for Breonna Taylor announced via Facebook that they would be breaking their fast. "It is with full hearts and our heads held high that we end our hunger strike at 25 days," they wrote.

But another group quickly picked up the mantle. Louisville's SURJ — an abbreviation for "Showing Up for Racial Justice" — announced they were encouraging their members to engage in a "rolling fast."

"Anyone interested in sharing their witness is invited to sign up to fast for a day or more and to announce their commitment," the group said in a release.

SURJ also asked their members to contact Mayor Greg Fischer's office with a version of this message: "I am supporting the Hunger Strikers for Breonna by being a part of a continuing rolling fast for Breonna. Your office never responded to their 25 days of fasting. We amplify their demand that mayor Fischer use his full power to fire Brett Hankison, Myles Cosgrove and Johnathon Mattingly."

Meanwhile, the members of Hunger Strikers for Breonna are planning to resume protesting — this time in the streets. Last week, the Louisville Metro Police Department announced it would no longer allow protests in public streets; instead, protesters must adhere to pedestrian and traffic laws and restrict their demonstrations to sidewalks.

According to the Courier Journal, those who do not comply could be cited or arrested.

"We realize this movement needs us," Maybe said during the group's last press conference. "LMPD recently attempting to rob the people of the right to protest motivated us to sacrifice this action and strengthen ourselves for the fight."