The city later bought a home rented by Taylor's ex-boyfriend, which was tied to a multi-million-dollar development 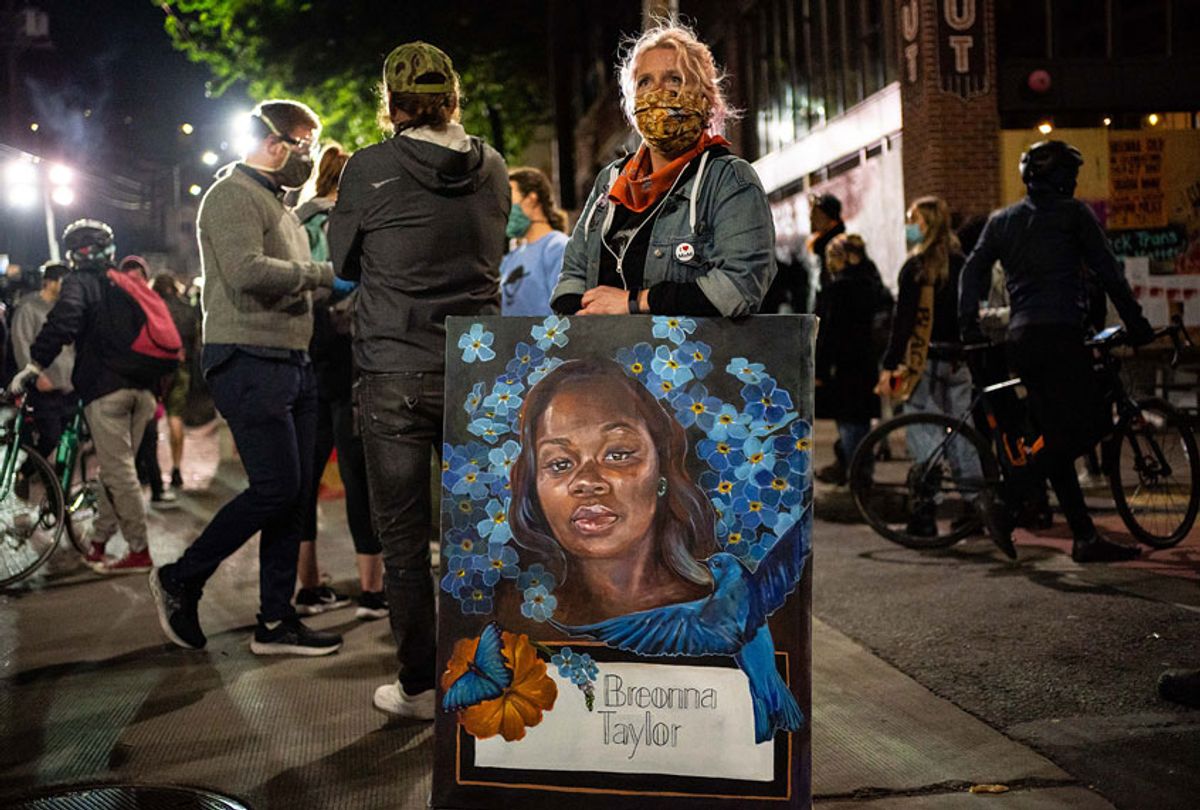 A demonstrator holds a painting of Breonna Taylor during a protest near the Seattle Police Departments East Precinct on June 7, 2020 in Seattle, Washington. Earlier in the evening, a suspect drove into the crowd of protesters and shot one person, which happened after a day of peaceful protests across the city. (David Ryder/Getty Images)
--

The shooting death of Breonna Taylor was part of a police operation to clear out a block in connection with a gentrification effort in western Louisville, according to an amended lawsuit filed by her family.

Taylor, a 26-year-old Black emergency room technician, was fatally shot after police executing a "no-knock" warrant entered her apartment as she slept. Her boyfriend, Kenneth Walker, said he fired a warning shot after officers did not identify themselves as police. Three officers then "blindly" fired 10 rounds in response, killing Taylor while she was still in bed. Authorities alleged that her apartment had been receiving drugs in the mail, but no drugs were found at the home.

Lawyers for Taylor's mother, Tamika Palmer, alleged Sunday in an updated lawsuit that the warrant, which was issued for Taylor's ex-boyfriend Jamarcus Glover, was initiated because Mayor Greg Fischer wanted to clear out the block in order to speed up a multi-million-dollar development plan, The Louisville Courier-Journal first reported.

The complaint alleges that the Louisville police department created a unit called Place Based Investigations focused on "certain areas which needed to be cleared for real estate development projects to proceed." Some homes on Elliott Avenue, where Glover rented a home, had already been demolished in recent months, and Glover's home remained in the way.

Attorneys said in the complaint that the home was the primary target of the raid. The lawsuit alleges that officers were "deliberately misled" into believing they were targeting the city's "largest violent crime and drug rings" by fixing on the home.

Glover was ultimately arrested at another location, but police found that his housemate, Adrian Walker, and another suspect were not at the home. Police then turned their attention to Taylor's home, which was nearly 10 miles away from the primary target, according to the lawsuit.

"Connecting the dots, it's clear that these officers should never have been at Breonna Taylor's home in the first place, and that they invaded the residence with no probable cause," the family's attorneys said in a statement. "The officers who robbed Breonna of her life — and Tamika Palmer of her daughter — exhibited outrageous, reckless, willful, wanton and unlawful conduct."

Fischer's office called the allegations "outrageous" and "without foundation or supporting facts."

"They are insulting to the neighborhood members of the Vision Russell initiative and all the people involved in the years of work being done to revitalize the neighborhoods of west Louisville," spokeswoman Jean Porter said in a statement. "The mayor is absolutely committed to that work, as evidenced by the city's work to support $1 billion in capital projects there over the past few years, including a new YMCA, the city's foundational $10 million grant to the Louisville Urban League's Sports and Learning Complex, the Cedar Street housing development, new businesses, down payment home ownership assistance, and of course, the remaking of the large Beecher Terrace initiative."

Documents filed seeking the no-knock warrant show that police claimed to have seen Glover leave Taylor's home with a package in January before driving to a "known drug house." Detective Joshua Jaynes said in the affidavit that he verified through a "U.S. Postal Inspector" that Glover was receiving packages at Taylor's apartment.

But the Louisville U.S. postal inspector's office denied that it had verified the information. The office said a different agency was asked to look into the matter, and that office concluded that the address had not received suspicious packages.

Interim Police Chief Robert Schroeder reassigned Jaynes last month over questions about "how and why the search warrant was approved." Schroeder also fired one of the officers who shot Taylor.

The lawsuit says that Glover and Walker were "not anywhere close to Louisville's Pablo Escobar or Scarface."

"They were not violent criminals," the suit says. "They were simply a setback to a large real estate development deal, and thus the issue needed to be cleaned up."

Glover's case remains pending. County records obtained by The Courier-Journal show that the city bought the property he was renting on Elliott Avenue for around $17,160 after his arrest.

The Courier-Journal reported that the "Vision Russell" project included a smaller project called the "Keeping It Real' Elliott Street Redevelopment," where Glover's house which was bought by the city is located.

A presentation obtained by local news outlet WAVE-TV showed Glover's neighborhood on Elliott Avenue. After the presentation, Glover began being targeted as other residents were evicted and had their homes bought up by the city, according to the lawsuit, but Glover still stood in the way of the project.

Fischer, who was named the president of the U.S. Conference of Mayors last week, has promoted the "Vision Russell" project since 2016 in hopes of stimulating the economy.

Mary Ellen Wiederwohl, Fischer's top economic adviser, called the allegations in the lawsuit a "gross mischaracterization of the project."

"The work along Elliott Ave is one small piece of the larger Russell neighborhood revitalization and stabilization work we've been doing for years," she said in a statement. "We have partnered with a community organization to understand community needs and wants, and the public land bank has been acquiring properties through foreclosure, donation and some sales; less than half the homes there are occupied. We have also been in conversation with nonprofit housing interests about using the publicly acquired properties to create Louisville's first community land trust to ensure investment without displacement. Our goal is to provide a safe, clean, desirable and affordable neighborhood for the residents of Russell."

There have been no arrests in Taylor's death, and the city has not released information about the investigation into the killing.

"I'm all about transparency, but we're also all about wanting fair trials to take place," Fischer told reporters last week. "So both the attorney general and the FBI have asked us to keep any reports that could influence witnesses off the public scene right now, because we want to make sure, if there is a trial, a fair trial takes place."