Why Tom Steyer, hedge fund billionaire and Biden adviser, is disillusioned with the free market

In an interview with Salon, Steyer defended Biden's climate plan, saying there's "no such thing as a free market" 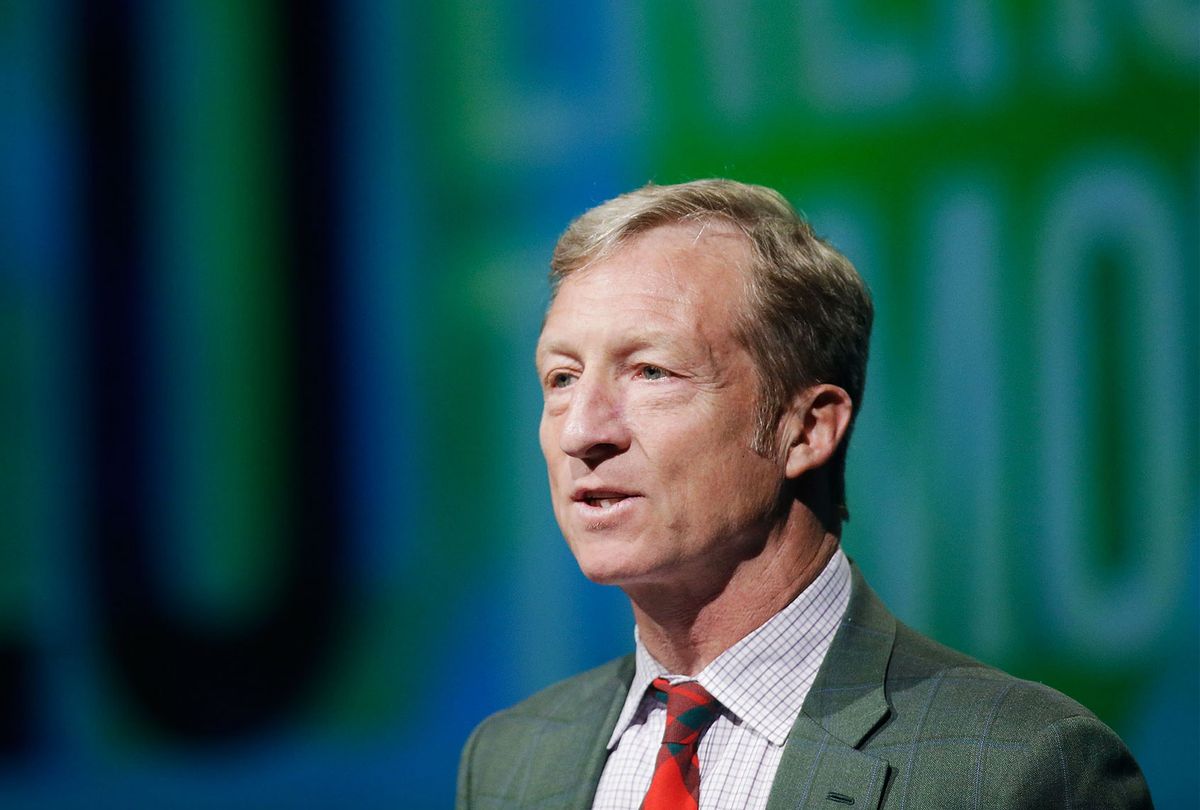 One of Joe Biden's top climate advisers has a message for people who oppose fighting climate change on the grounds that it would infringe on the free market:

"The whole idea of a free market, like God came down and in the state of nature created a free market? There's no such thing."

Salon has interviewed Tom Steyer on several occasions. The hedge fund manager and philanthropist was one of literally dozens of Democrats who sought that party's presidential nomination in 2020 and pushed long before he entered the race for President Donald Trump to be impeached. In his primary campaign Steyer ran as a full-throated progressive, one who could point to years of environmental activism to give him credibility on the literal life-and-death issue of climate change.

Now that the Democrats have chosen former Vice President Joe Biden as their nominee, Steyer is co-chairing the candidate's Climate Engagement Advisory Council. (In one of history's great ironies, Trump was eventually impeached because of his allegedly illegal efforts to smear Biden during the primaries.)

Yet as Salon discussed with Steyer during our interview earlier this week, many on the left feel that capitalism itself is the underlying problem behind not just global warming, but many of the other ecological and economic woes facing humanity. While Biden has made it clear that he hopes to pattern his administration off of that of one of America's most influential liberals, President Franklin D. Roosevelt, there are questions about whether his Build Back Better plan for creating jobs goes far enough.

Is it possible to be a capitalist and save the planet from its impending apocalypse? I asked Steyer about that, plus plenty of other things related to climate, consumerism, and economics. As usual, our interview has been condensed and edited for print.

I think you and I are going to agree that when it comes to the "choice" between [former Vice President Joe] Biden and President Donald Trump, it's not a choice. But the question is, do you think Biden's plan goes far enough? Because during the most recent debate, he did say he opposes a Green New Deal. So I'm curious, how aggressive do you think he needs to be in averting a climate crisis? Is he going far enough?

The Build Back Better plan is $2 trillion in the first four years of federal spending on clean infrastructure. That is by far the most amount of money anyone's ever talked, ever, about clean infrastructure, and it is a reaction to our climate crisis, a reaction to the need for job creation of good middle-class union jobs. It's a reaction to our need to address environmental injustice in terms of the concentration of air, water, and toxic pollution in underserved black and brown communities.

That shows that Joe Biden gets this issue, cares about it, sees it through the lens of the human beings — the Americans who are effected — and is providing real leadership. And that was my experience in talking to him while I was campaigning and talking to him subsequently. He really does care about and get this issue. He does it by caring about people. That's his sort of entree into policy. This is appropriate for what he's doing. He is making a real push here and he's going to, as he said right off the bat, boom, "I'm going to do this." And it's really important that we do it. And he's right.

I just want to again play a little bit of devil's advocate. I've spoken to a lot of climate change experts and economists who have argued that free market economic structures require constant consumption of resources and are therefore inherently unsustainable, ecologically as well as economically. And they've argued that we need even more government regulation, more government control over large businesses and wealthy individuals in order to save the planet. What would your response be to that?

I think if you look at where we're going — and I promise you, Matt, I have thought about this a lot — we're going to have to rely on a lot of innovation, research, entrepreneurship, new ways of thinking. People always want to say "free market." I mean, those were the words you used, "free market economic structures." There are no free markets! Every market has rules. And so do we need to change the rules in the market? Heck yes! The whole idea of a free market, like God came down and in the state of nature created a free market? There's no such thing. And just think about the labor market: Once upon a time, I could have hired a 12-year-old kid for 25 cents a day and worked him for 14 hours a day. Can't do it now.

You know why? Because they changed the rules. Because all markets are driven by rules. I will say this: unchecked capitalism in this respect has failed and will fail. The way that we're going has failed and will fail. Do we need government to stand in and put in rules that will protect us and will control corporations from doing exactly what you're saying, which is destroying the natural world? Absolutely! Do we also need innovation and new products so that we can do it in a way so that we can power right through it in terms of the way we live? Absolutely! So I've never felt there was this conflict about whether the government should act. We absolutely need the government to act! If you look at the statement, 'We're going to have 100% clean electricity generation by 2035,' that's the government acting. That is an absolute statement that we have to do this. And the elected representatives of the will of the American people are going to have to act. So there ain't no free market. And if you're waiting for people in the free market to act on behalf of other people and save us, that is not a realistic expectation.

[Earlier in the interview you said] that the news about JP Morgan and the Hong Kong bank [both JP Morgan and the Hong Kong Monetary Authority have recently pledged to do more to fight climate change] are signs that actors in the market are doing the right thing, for reasons that are consistent with what they perceive to be their own financial interest. I want to make sure I understand.

Absolutely! Look, I'm not down on the free markets and business. I think that government has its role and business has its role. And business's role is to work within the rules, set up by government, for the good of the people. I don't want business setting up the rules because they'll set up rules for themselves. The government sets up the rules, sets the framework, provides the infrastructure for business to innovate within. Business is good at innovation. Business is good at entrepreneurship. And we have to rely on them for that. But when it comes to making sure that the rules serve the people of the United States and the world, that's why we have democracy. So people's voices can be heard. That's why I'm a huge proponent of the broadest democracy and set up NextGen to try and engage and empower young voters who otherwise wouldn't vote. I definitely believe in a role for government and a distinct role for business. They're going to have to work together, but a government reflects the values of society and sets the rules so those values are protected.

According to [a 2017] Carbon Majors Report, there are 100 companies that are responsible for 71% of all carbon emissions. And I remember when that report came out, some of my friends who are environmentalists were like, 'Well, why don't we just crack down on those 100 companies? Why am I going through all these efforts to reduce my carbon footprint? Why can't some international organization or these individual governments tell these 100 companies to knock it off?' What would your response to them be?

I understand their frustration and I agree with their point in a general way. And let me rephrase what they're saying in a more general way that would reflect the same result, which is this: Do I think it's important that Matt and Leah [Steyer's press secretary] and Tom compost? Yes. But do I believe that the voluntary composting of Matt and Leah and Tom is going to save the world? No.

This was my point about governments. They're basically saying we need government action at the highest level to step in and change the rules to make sure that private interests do not destroy the public good, namely the health and safety of humans across the planet and in effect the natural world on which we all depend, whether we know it or not. And I agree with them.