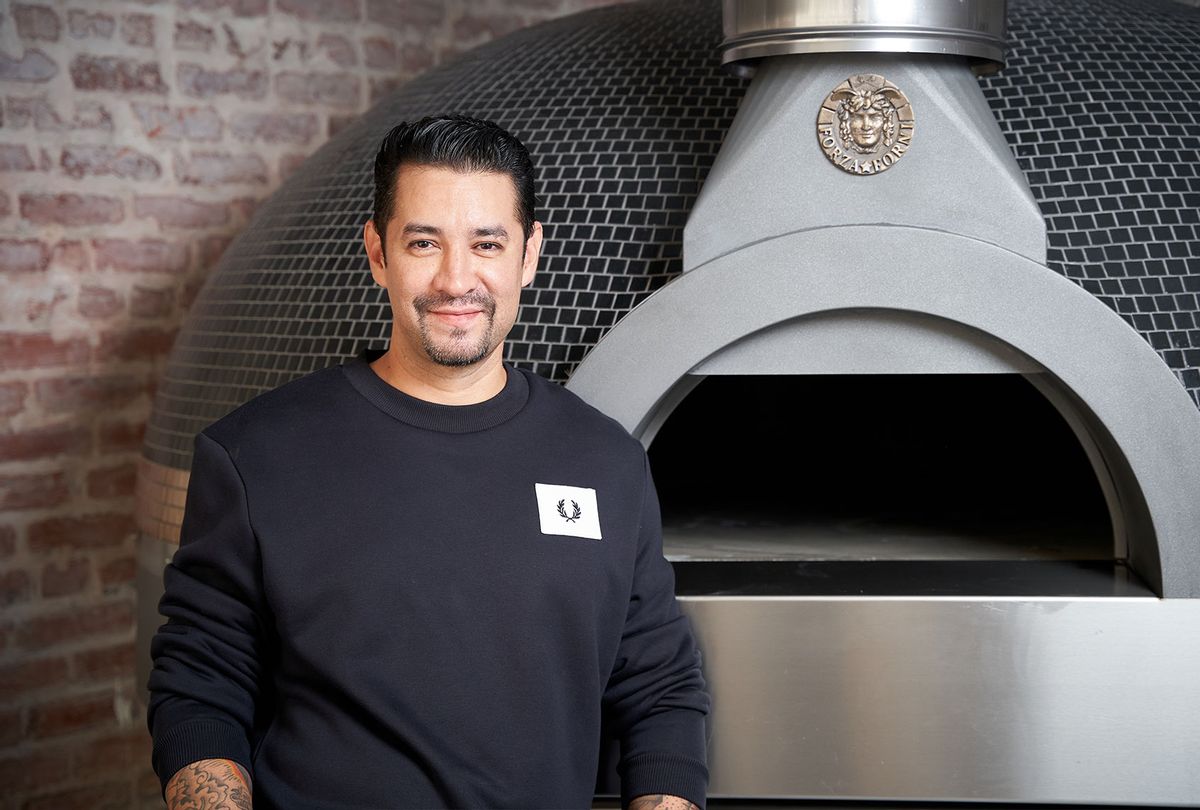 When Chef Mario Christerna's mother was pregnant with him, she craved pineapple empanadas from La Mascota Bakery in Boyle Heights throughout the pregnancy. The connection was so strong, not only did her water break inside the panaderia, Christerna himself has had the same hankerings for the sweet, yellow jelly-filled pastries since he was a kid.

Christerna not only was born and raised in Boyle Heights, but four decades and dozens of empanadas later, he is planting his restaurant's roots in the neighborhood, cementing his legacy in the community that raised him. In November, his Brooklyn Avenue Pizza Company opens to the public below The Paramount music venue, and he envisions his new spot to be the setting of after-school meet-ups, family gatherings and late-night, post-show powwows. Though the name of the restaurant might seem like a signal of gentrification to the outsider, it's actually an homage to the layered, resilient story of Boyle Heights as one of the first suburbs of Los Angeles. The neighborhood is home to Latinx, Japanese, Black, and Jewish community members, among others – and was popularized in the critically acclaimed Starz series "Vida." The historic building also represents a convergence of values and identities for Christerna, and stands as a relic of the community's self-determination.

Before 1994 when the street was named after Cesar Chavez, co-founder of the United Farm Workers union, it was called Brooklyn Avenue as a way to attract the Jewish community moving out west — with Boyle Heights eventually hosting the highest concentration of Jewish people in America outside New York. And it was at 2708 Brooklyn Avenue where the Jewish Bakers Union was headquartered in the 1920s. The radical union organized to promote workers' rights, buying union-backed products and protested assimilation- and capitalist-minded constructs.

When the bottom floor space of the building they occupied a century ago opened up, Christerna felt an immediate connection. "I grew up eating pizza. And I always wanted to have a fast casual spot and bake pies. So when this opportunity came to be in the space where the Jewish Bakers Union was, it just made perfect sense. I thought, 'This is where it needs to be,'" he says.

Down the hall from Brooklyn Avenue Pizza Company is the Boyle Heights Arts Conservancy, an organization that provides pathways for youth of all economic backgrounds to hone their skills in the media arts — whether radio, film, television, broadcasting or other digital content creation. Christerna, who regularly serves his community by cleaning tombstones in Evergreen Cemetery and reading books to children at nearby elementary schools, is also invested in partnering with his neighbors, even hiring and training members of the Conservancy for his business. "We're committed to creating jobs for each other and helping each other out as part of the bigger picture. We connected with them when we first started because we're creating businesses here. Just like we want their programs to continue, we also want to keep our businesses going," he says.

Christerna also brings his own background in the music industry into the foray. A former EDM promoter and forever punk rock enthusiast from a musically inclined family (his grandmother is a gospel mariachi singer), the resonance of The Paramount's 100-year history is personal, as he's attended many shows there. Though events at The Paramount, the last mid-sized ballroom in LA that's located on the second floor of the building, might be on hold until after the pandemic, he has already revamped the bites and cocktail menu to reflect flavors and ingredients reminiscent of his Chicano background.

Music, in fact, has been the impetus for Christerna's cooking. While on tour with his musicians, he would often brainstorm and sketch the dishes he wanted to cook when he'd finally have the chance to open his own restaurant. And there is a keyboard in his office and cooking space, which he plays on for inspiration as he dreams up his menus.

As efforts continue to fight back against gentrification across the nation, people like Christerna are just part of the fierce movement by locals for locals. And he's not resting anytime soon. His next restaurant, Poblador, will be next door to the Brooklyn Avenue Pizza Company, featuring Alta California cuisine using ingredients native to the L.A. River in homage to the Indigenous Tongva people, who – along with the Chumash – were the most influential people in the Southern California region at the time of European arrival.