Other researchers aren't finding phosphine, a sign of anaerobic life, in subsequent studies 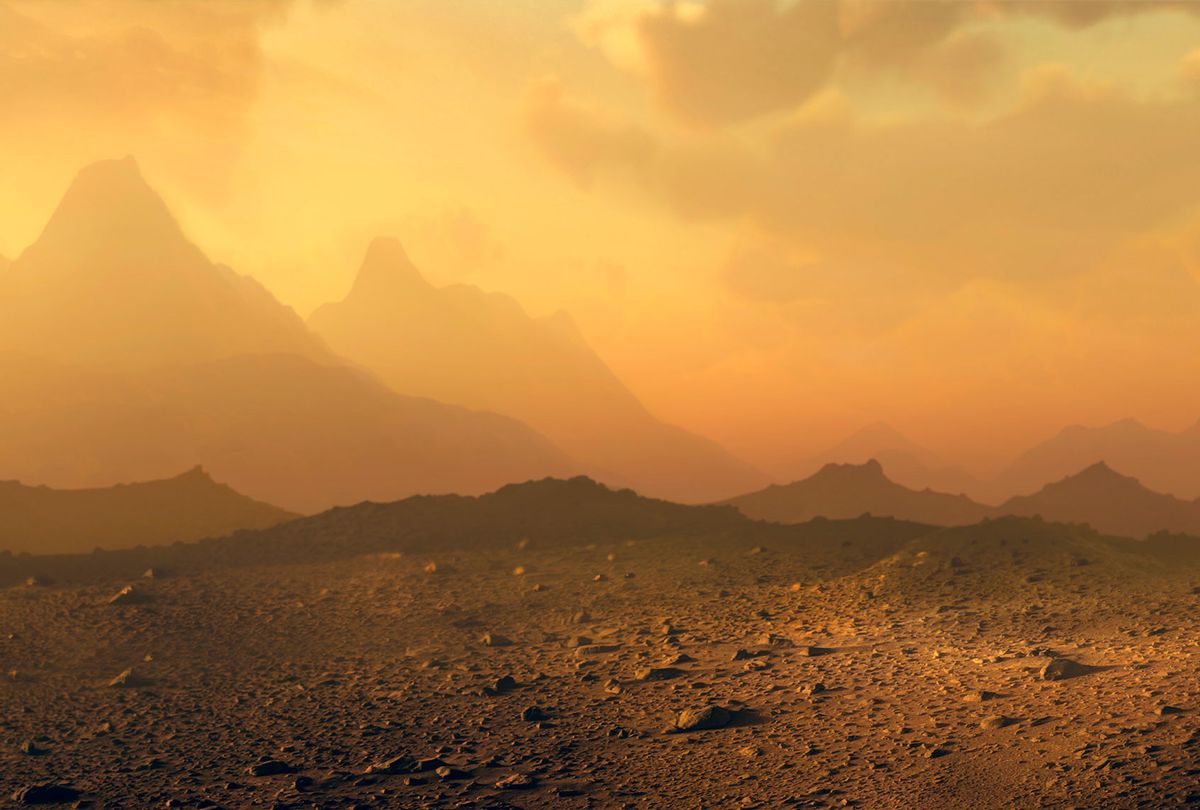 Computer illustration of a view across the rocky surface of the planet Venus, showing clouds of sulphuric acid obscuring the Sun. (Getty Images)
--

Last month, the science world was stunned and excited when Nature Astronomy published a paper indicating that the atmosphere of Venus appeared to contain trace amounts of phosphine, a gas associated with anaerobic bacteria on Earth that would be near-impossible to produce in any other fashion on Venus. If other scientific studies continued to confirm the report's findings, that could mean that there is life in Venus' clouds.

Now, two subsequent scientific investigations question the evidence on whether phosphine — and perhaps life — resides in the Venusian atmosphere.

Scientists study the Venusian atmosphere by analyzing spectra, or plots of light emanating from the planet, and analyzing the wavelengths. Because different molecules produce different wavelengths when light shines through them, scientists can ascertain chemical compositions of various substances using this method. Whenever looking at spectral data, there is the risk that "noise" — meaning, any variable that could alter the wavelengths for reasons unrelated to the composition of the chemical compounds studied — can cause inaccurate results. Notably, the phosphine spectrum from Venus was faint to begin with.

According to one paper in the scientific journal Astronomy & Astrophysics, written by Thérèse Encrenaz of the Paris Observatory and her colleagues, archived data from an infrared spectrograph in Hawaii called TEXES did not find any indication of phosphine in their data collected between 2012 and 2015. However, the TEXES spectrographic data looked at the cloud tops of Venus, while the original paper claiming phosphine appears in the upper atmosphere analyzed a lower part of the atmosphere, below the cloud tops.

While this does not automatically disprove that phosphine exists in the atmosphere, it opens up logistical questions about how it would move around Venus' atmosphere.

Another paper submitted to Astronomy & Astrophysics that calls into question the evidence for Venusian phosphine was posted online just last week. Authored by astrophysicist Ignas Snellen from Leiden University in the Netherlands and his colleagues, the paper analyzed the same data from the ALMA telescope array in Chile that scientists initially used to find evidence of phosphine on Venus. After reducing the noise, they too concluded that "the presented analysis does not provide a solid basis to infer the presence of PH3 in the Venus atmosphere."

Though the phosphine discovery is not disproven, these findings certainly put a damper on the exciting prospect of life on the second planet from the sun. Likewise, such scientific call-and-responses epitomize how good research is done.

"It's exactly how science should work," Paul Byrne, a planetary scientist at North Carolina State University in Raleigh, told Science News. "It's too early to say one way or the other what this detection means for Venus."

Clara Sousa-Silva, an astrochemist at the Harvard-Smithsonian Center for Astrophysics, expressed a similar view to Science News, telling the publication that having the findings challenged "is completely normal and what I expected (nay, hoped) would happen. This is usually a phase of a project that I enjoy, and I am hoping people will realize this is just what science looks like."

When Salon spoke last month with a planetary scientist who studies Venus, he also observed that the news about possible phosphine was auspicious regardless of whether it would be later verified.

"Personally I find it exciting," Noam Izenberg, a planetary scientist at Johns Hopkins Applied Physics Laboratory and deputy chair of NASA's Venus Exploration Analysis Group, wrote to Salon. "The Venus science community is about as energized as I've seen it in well over a decade. Whether or not this specific finding is verified or falsified by follow up investigations, it drives us to learn and know more. It highlights how much we don't know about Venus, and that fundamental new discoveries, possibly relevant to and reflective of the history of our own planet, await us next door."