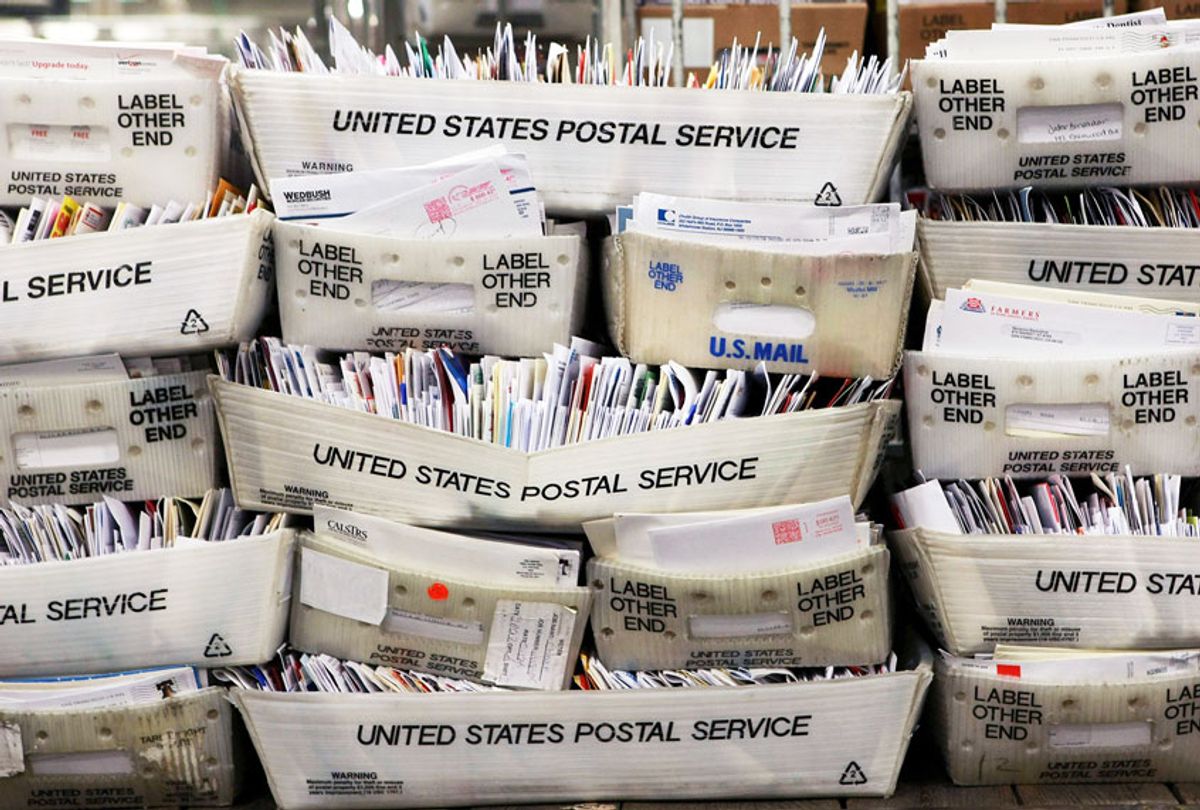 The U.S. Postal Service (USPS) argued that there is no "constitutional right" to timely mail delivery after its own data showed that on-time delivery times had plummeted ahead of Election Day.

The Department of Justice, which is defending the USPS in a lawsuit brought by New York and other states over changes ordered by Postmaster General Louis DeJoy, a top donor to President Donald Trump, argued that the mail slowdown cannot be unlawful because there is no guarantee in the Constitution of timely mail delivery, Bloomberg News reported.

The states' argument "assumes that because the plaintiff states crafted their election laws with the expectation that USPS will provide a certain level of service, they now have a constitutional right to expect that level of service," the DOJ said in a court filing, adding that the Elections Clause of the Constitution "does not shield states from any and all external circumstances that may impact state elections."

James argued that the slowdown violated the Elections Clause, because the USPS had taken "actions that are intended to, and do, have the effect of hampering state election administration."

Numerous federal courts have ordered the USPS to reverse changes ordered by DeJoy over the summer, which the agency's own inspector general faulted for reduced performance.

"No analysis of the service impacts of these various changes was conducted, and documentation and guidance to the field for these strategies was very limited and almost exclusively oral," the report said. "The resulting confusion and inconsistency in operations at postal facilities compounded the significant negative service impacts across the country."

Despite the court orders to restore mail-sorting machines and reverse rules limiting extra delivery trips, mail delivery times have gotten worse — not better. A judge ordered the USPS on Tuesday to inform all employees that DeJoy's policies had been reversed.

The order came after the agency's own data showed that mail delivery had plummeted in recent weeks.

Though the USPS has processed election mail at a faster rate, voting rights advocates warned voters against sending ballots by mail in the final days before the election.

"It's too late to use the mails," former Attorney General Eric Holder, who now heads the National Democratic Redistricting Committee, warned on Twitter. "I urge everyone to now vote in person; early vote or use drop boxes. Protect your health but don't let the Court and the deliberately crippled Postal Service deprive you of your most precious civil right. Plan your vote."

The USPS itself has also warned against sending ballots by mail in the final week before the election.

"Our general recommendation is that as a common-sense measure, you mail your completed ballot before Election Day, and at least one week prior to your state's deadline," the agency wrote on its website.

Forty-two million out of 92 million mail ballots requested by voters still have not been returned despite the delivery window closing, according to the U.S. Elections Project. Accordingly, elections officials recommended submitting the ballots at drop boxes or voting in person rather than using the mail.

"We are too close to Election Day, and the right to vote is too important to rely on the Postal Service to deliver absentee ballots on time," Michigan Secretary of State Jocelyn Benson said in a statement on Tuesday. "Citizens who already have an absentee ballot should sign the back of the envelope and hand-deliver it to their city or township clerk's office or ballot drop box as soon as possible."

"Today is the last recommended day to mail back your ballot," Arizona Secretary of State Katie Hobbs said on Twitter. "After today, return your ballot to any election drop box or voting location in your county."