Donald Trump's election mayhem is coming: Journalists must be ready to fight back

We know Trump will try to swamp this election in lies, rumors and lawsuits. Political media must be prepared 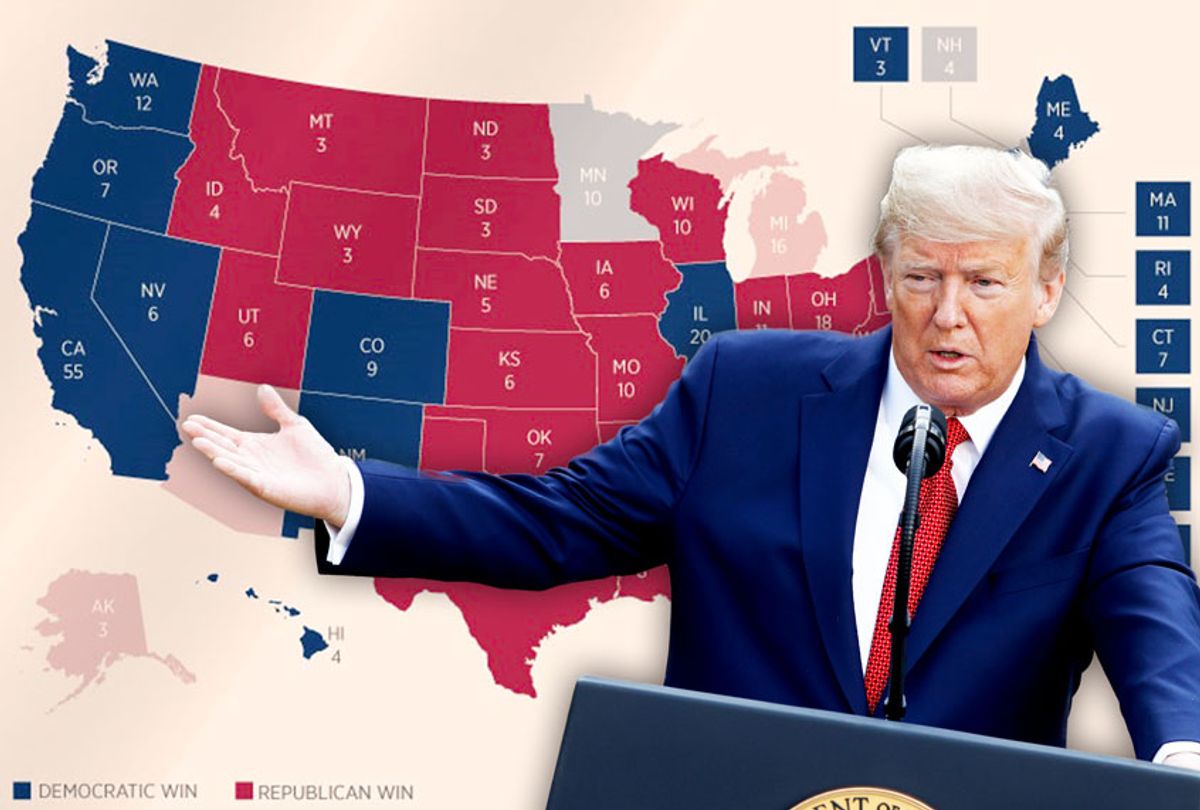 As it becomes blindingly obvious that Donald Trump is going to fight to throw out any ballot counted after midnight on Nov. 3, it is ever more urgent that journalists be prepared to explain to the public why there's no practical, legal or moral rationale for his demands.

An important first step in this prebuttal will be to get Republican and Democratic election officials — particularly in swing states — on the record saying that there is nothing risky or dangerous about counting every legally submitted ballot, even if it takes a few days.

Trump's claims that mail-in voting will be massively fraudulent, and that votes not counted by election night are somehow wildly more susceptible to cheating, are actually far beyond even Republican norms. They simply don't make sense — and state election officials will tell reporters that, if they ask.

Credit for this idea belongs to Paul Bernstein, a former editor in the Washington Post's Metro section. He wrote in an email:

It's unavoidable that many Trump supporters will see a conspiracy if key states shift from red to blue once the mail ballots have been counted. But this paranoia may be less widespread if state election officials (especially Republican ones) make statements NOW, before any votes have been counted, vouching for the integrity of the vote-counting process. And they won't issue such statements unless journalists press them on this point.

Trump, meanwhile, continues to say what were traditionally the quiet parts out loud: "Big problems and discrepancies with Mail In Ballots all over the USA. Must have final total on November 3rd," he tweeted on Oct. 26. (Twitter flagged this as possibly misleading.)

In Nevada on Wednesday, he made it clear he expects the courts to stop the counts early. "I think on Tuesday we're gonna over-perform, and we'll see what happens at the end of the day," he said. "Hopefully, it won't go longer than that. Hopefully, the few states remaining that want to take a lot of time after Nov. 3 to count ballots — that won't be allowed by the various courts, because as you know, we're in courts on that."

Whether the Supreme Court would help Trump shut down the vote count isn't clear, although the elevation of Amy Coney Barrett certainly makes it more likely.

Even without her, the five right-wingers on the court this week barred Wisconsin from receiving and counting absentee ballots after Election Day, even if they were mailed before.

In an audible heard round the world, Justice Brett Kavanaugh expressed the perverse view that states announce winners on election night (they don't) and that any votes counted afterwards would only destabilize the country. As Slate's Mark Joseph Stern wrote, Kavanaugh's opinion was "extraordinarily sloppy" and "riddled with errors."

Rick Hasen of the UC Irvine School of Law wrote in a Washington Post op-ed: "Kavanaugh's opinion advanced a controversial theory about near-absolute power of state legislatures to set rules in federal elections. It also was sloppy in talking about facts and the law, and it echoed Trump's false talking points about the perils of voting by mail."

Justice Elana Kagan, agog, responded in a footnote that will go down in history:

JUSTICE KAVANAUGH alleges that "suspicions of impropriety" will result if "absentee ballots flow in after election day and potentially flip the results of an election." But there are no results to "flip" until all valid votes are counted. And nothing could be more "suspicio[us]" or "improp[er]" than refusing to tally votes once the clock strikes 12 on election night. To suggest otherwise, especially in these fractious times, is to disserve the electoral process.

Kavanaugh's outrageous assertion suggests that if such a case gets to the high court, which appears relatively unlikely, the stage is set for a decision that would make the Bush v. Gore decision of 2000 look benign.

Then again, on Wednesday, Kavanaugh and Roberts joined the three liberal justices in allowing Pennsylvania and North Carolina to count absentee ballots for three and nine days after Election Day, respectively, as long as the ballots were mailed on time. In the Pennsylvania case, however, the three dissenting right-wingers noted that late ballots would be segregated, leaving open the possibility of a later challenge.

Pennsylvania is one of two key battleground states — the other being Wisconsin — where state laws don't allow election officials to even begin processing absentee ballots until Election Day.

So much to prepare for

This is only one of the many things journalists should be doing prophylactically, to be proactive rather than reactive when things go wrong, which they almost inevitably will.

Jennifer Brandel, the CEO of a company called Hearken, which gives brilliant advice to news organizations about how to better engage their communities, sounded the alarm this week in a post on Medium. "In speaking to newsrooms recently," she wrote, "we've been alarmed by, well, how unalarmed they are, and how uninformed they are about the threats."

Among the other useful advice for journalists: A reporters' guide to covering the 2020 election from Pen America, which urges journalists to "repeatedly use denominators for readers to understand the scale of any given issue being reported."

A group of communications scholars published a number of Recommendations for Media Covering the 2020 U.S. Presidential Election, among them that "centering voters and election administrators, highlighting everyday acts of civic duty, focusing on process and timelines, covering the polling places and workers that are doing it right, and revealing issues where people agree elevates the everyday citizen while demystifying institutions."

And 13 tips for covering likely election scenarios from the American Press Institute include the advice: "When ballots are found in unusual places, explain that such cases are rare and that safeguards exist to protect votes."

The overarching reality to keep in mind, however, is that this is not a normal election.

As I've been writing for some time now, Trump is not even trying to win — at least not in the normal manner, i.e., by getting the most votes.

His goal seems to be either to sow enough chaos to steal the election, or to lose while creating such a powerful narrative of victimization that his base sticks with him, giving him a lasting power center and source of personal revenue.

Either way, there will be any number of attempts to suppress, intimidate, leave uncounted or throw out potentially hundreds of thousands of lawfully submitted votes.

Reporters need to be ready to respond thoughtfully and effectively when the shit hits the fan, and that means as many prebuttals as possible.