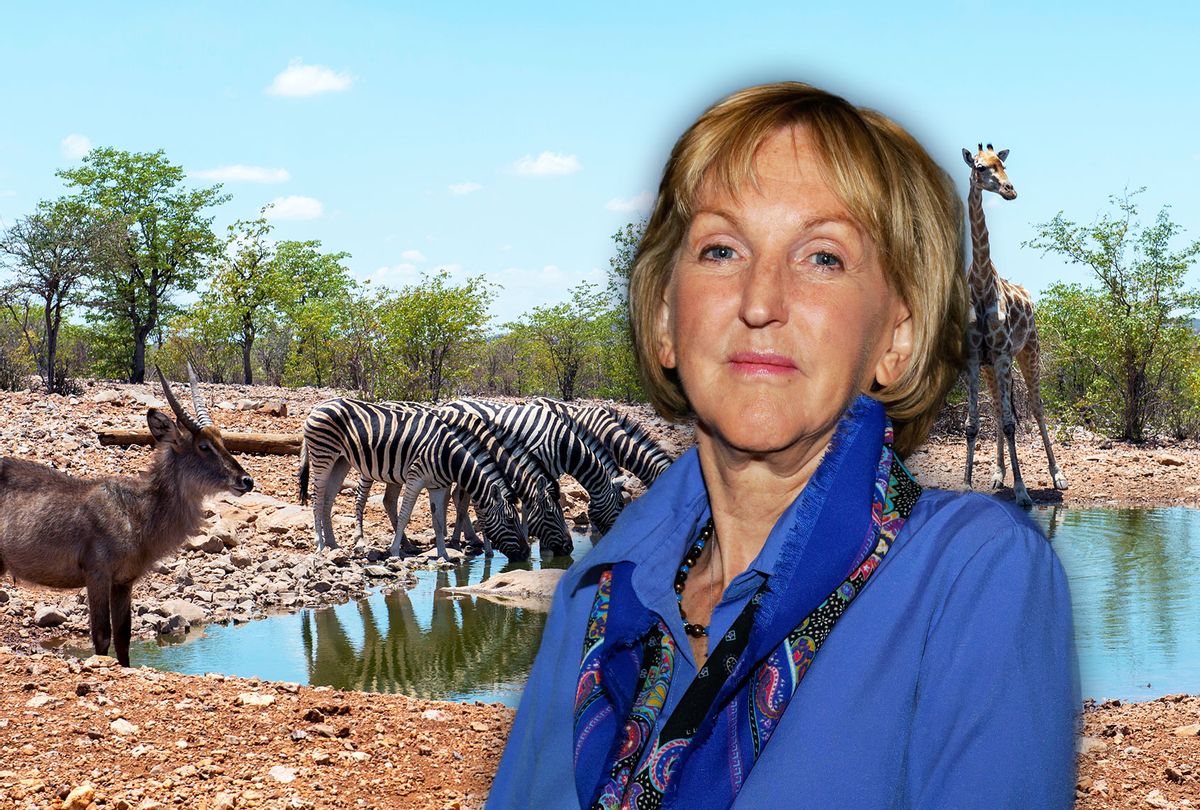 I feel a great deal of remorse admitting that I am an animal lover who still eats animals.

I tried to put this shameful feeling out of my mind as I interviewed Ingrid Newkirk — the president of PETA (People for the Ethical Treatment of Animals), perhaps the world's most famous animal rights group — about her new book, "Animalkind," which she co-authored with writer Gene Stone. Certainly the book deserves a good read, regardless of one's stance on animal rights; and it may recall strong feelings in other readers, too. In a sense, it is really two books: The first half is a tribute to the diversity and complexity of animals ranging from charismatic animals like dogs, pigs and chickens, all the way down to snails and slime molds. The second half condemns the way society exploits animals for food, clothing, scientific study and our own entertainment.

If you support animal rights, "Animalkind" is a handy bible, an easy go-to resource for all of the intellectual arguments and poignant anecdotes you'll require when making your case to others. If you oppose animal rights, "Animalkind" is a must-read for no other reason than intellectual honesty. From a moral perspective, no one has the right to support acts of cruelty without being fully aware of what they are doing, and why.

I strongly suspect that I am not alone in feeling guilt about the animals that I've indirectly hurt in my life. All of us who eat meat or wear leather think at some point in our lives about the animals that brought us these things. If people didn't know on some visceral level that eating meat was wrong, we wouldn't have factory farms go out of their way to stop journalists from documenting what they do. It wouldn't be common for carnivores to mock vegetarians and vegans not by pointing out any flaws in their logic or morality, but simply because the meat-eater feels a little more comfortable, a little less uncertain than they did before.

That is why, when my editor suggested that I interview Newkirk about "Animalkind," I felt compelled to say yes. I do not claim to be a good person, at least when it comes to this issue. But I hope I am at least good enough to realize that I should, and could, be better. And I was curious to hear what Newkirk had to say about these moral questions about animals that linger in the back of our minds every day.

This interview has been lightly edited and condensed for clarity.

You quoted Charles Darwin, who says that animals are emotional beings and feel the same range of emotions as us. Of all the stories in your book covering those themes of animal emotions, which ones really stand out to you?

Of course we are one animal among many, and all the animals experience all the emotions. They are great emotional beings. They're not robots or tables or chairs.

I'm very taken with the love, the fidelity, the protectiveness, particularly of birds who tend to have a 95% separation rate. And I say "separation" because separation usually comes from accidents or being shot. Compared to our 45% or higher divorce rate among human beings.

And I'm particularly interested, not in the exotic species so much — because people understand them or respect them more — but in the denigrated species like pigeons, who are devoted parents. Both the male and the female pigeon make milk for their baby in their crop. And so if you see a pigeon with their bill down another pigeon's bill, they could be feeding their baby — they take turns doing that — or they could be kissing, because they're incredibly romantic. And in fact, years ago, when I was protesting the Hegins pigeon shoot — where these pigeons are rounded up in cities, taken out and shot — I noticed that some pigeon mates and friends would come and sit beside an injured wing-shot pigeon, even at great danger and peril to their own lives.

So their loyalty and so on really strikes me. But almost everything about animals is undervalued when we should be in awe of them.

Your book warns against anthropomorphizing animals. Why do you feel this way?

It actually isn't so much against anthropomorphizing. I think it makes a different point. The people anthropomorphize, meaning put animals' feelings, emotions, reactions into other animals that they feel themselves. And for years, scientists warned us not to do that in the same way that they don't want people to give names to animals caged in laboratories who are going to be experimented on because it personalizes them. It makes them real to you as other individuals.

But I think it's anthropocentric not to recognize that love and joy and all the things you previously just said, these emotions of shared emotions. They are not peculiar to the human animal. We all value our young and hope to protect them unless we're psychotic. We all do the same things. These are shared traits, shared emotions. And so the days of anthropomorphism need to, or the word "anthropomorphism" needs to disappear from our vocabulary.

I have a peculiar question, about "cuteness." I know a lot of us think of animals as being cute. On the one hand, I think that finding animals cute is a positive because it does breed empathy, and it's an emotion that involves love. At the same time, one could argue that finding animals cute is patronizing and allows us to not see them as our full equals, and excludes the rights of animals that may not be "cute." A frog may not be considered cute by many, but it doesn't it have the same rights as a dog. What are your thoughts?

This is a wonderful question! I often say we infantilize animals. As we see them as accoutrements to our own lives or toys. They have to match our drapes or suit our personalities. So as you say, it is unlikely in the main that anyone would do anything horrific to an animal they considered cute. You do find people picking up a baby dolphin, who is about to be stranded on a beach, or messing around with another cute animal to their detriment, sometimes even causing their deaths while they take selfies with them and what have you, because they want to be so close that "cuteness."

I'll give you a little story, if I may. I have a one-footed crow, a mother crow with one foot who comes onto my window sill every morning for breakfast. And she's just phenomenal. She has to deal with traffic, with winter, with ice. She has to balance on her one foot, on cables and fire escapes, and what have you. She has to find food every day, not just for herself. She has two children. And I know that they're her offspring because one of them has been extremely noisy and she's had to deal with them. But they come with her and she has to look after them. She has to shelter them herself. I couldn't do what she does. And yet one day someone puts their head around the corner of my office and saw her on the window sill and said, "How cute!" Just like that.

In your book, you mention the "three Rs" of humane animal research. I was wondering if you could explain how implementing them would not impair research.

The three Rs are reduction, replacement and refinement, and no one could argue that even if they support the use of animals in experiments, that those three things shouldn't be done. Why would you use more animals? Why would you not replace them when you should? And why would you not reduce the amount of pain and suffering and so on by refining the experiment?

But I'll go one step further. What we need now, in this era of high-technology and of high-speed computers programmed with human data, with organs on a chip, with whole human DNA on the internet, with all this wonderful state of the art advancement, is we need to replace. Get rid of animal experiments, swap them out for these wonderful advances that we have made.

Unfortunately, in many laboratories, we have career animal experimenters who are not working on anything to do with human health. They're working on psychology experiments and they are interfering with the brains of monkeys and rats and frightening them with rubber spiders and snakes and swimming them to exhaustion, just to see what happens. And these are not unusual goings-on in laboratories. We need to change all that now.

I want to ask you a slightly personal question about eating meat and being kind to animals. A lot of cruelty towards animals is embedded in the economy. And for a lot of people, habits are hard to break. What is your advice on changing our behavior to respect animals?

Well, I think we're all grown up now and we all understand the concept of personal responsibility. And so we need to be brave and we need to be disciplined and we need to do our best. Nowadays it is so easy, because there are what I call 'taste alikes' for every single thing, from steak to shrimp. There is cavi-art instead of caviar and faux gras instead of foie gras.

From the most exotic to the most basic, like the Beyond Burger, I challenge anybody not to satisfy their taste buds while making the switch. So if we do object to the transport, the factory farming, the horrors of the slaughterhouse, the horrors of the laboratories, and so on, we can change easily enough. We've got 5,000 companies on our cruelty-free cosmetic and household products list. It's not hard to find them if you just spend a second or two looking.

So I would say, if there's an animal in the equation, we have to remember that they're not volunteers. They didn't give up the skin on their back or their flesh or volunteer to be an experiment and be killed, or be used in confinement.

Put yourself in their shoes. What we were taught as children is the golden rule: Do unto others as you would have them do unto you. And if I was in that position, would I wish somebody to pay money for myself or no? So I would say, look, we've made it so easy at PETA. We have lists of everything you could possibly imagine: alternatives to dissection. I mean, you name it. Wonderful fashionable shoes. Practical jackets. you can climb Mt. Everest in. Anything you want, there is a vegan version these days. So it really doesn't take much except a little bit of self-discipline, a little decision that I'm going to do my best.

"Animalkind: Remarkable Discoveries about Animals and Revolutionary New Ways to Show Them Compassion," by Ingrid Newkirk and Gene Stone, is out now from Simon & Schuster.