Chang'e-5, launched today, is poised to be a historic step in lunar research 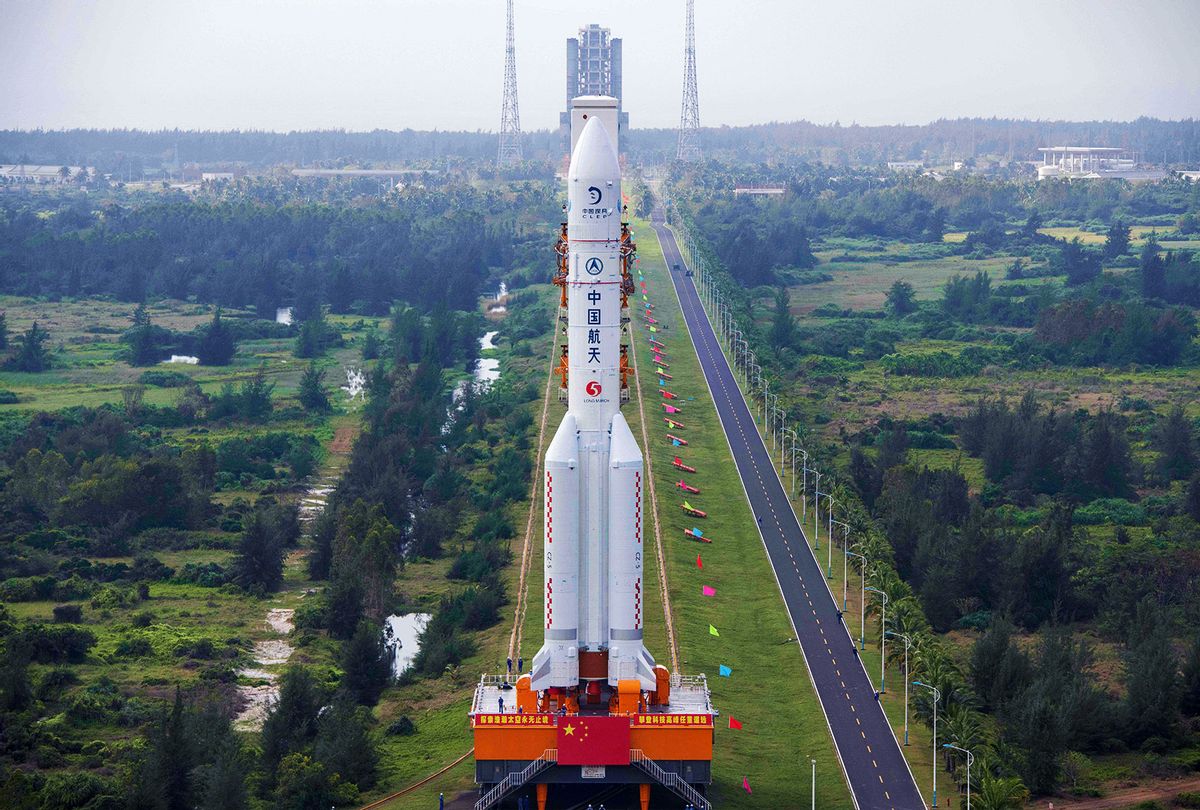 This photo taken on November 17, 2020 shows the Long March 5 rocket, which will launch China's Chang'e-5 lunar probe on November 24, being vertically transported to the launching area at the Wenchang Spacecraft Launch Site in southern China's Hainan province. (STR/AFP via Getty Images)
--

On Monday afternoon China launched a spacecraft that, if its mission is successful, will bring Moon rocks back to Earth for the first time in more than 40 years.

The Chinese mission, known as Chang'e-5, used a rocket known as Long March 5 to send a spacecraft to the Moon with the help of the European Space Agency (ESA), according to The New York Times. The launch occurred at the Wenchang Space Launch Center on Hainan Island at 4:35 AM local time (3:35 PM ET). The spacecraft includes an ascender, lander, orbiter and returner, with the plan being for the lander and ascender to descend to the Moon's surface next month, where it will land near Mons Rümker. Mons Rümker is a volcanic formation approximately 4,265 feet high in the northern region of the Moon's massive dark lava plains known as Oceanus Procellarum. Chang'e-5 is expected to spend roughly two weeks on the Moon's surface (or the equivalent of a single lunar day) during which time scientists hope it will drill roughly six and a half feet and collect roughly 4.4 pounds of material. If all of this is successful, Chang'e-5 will return to Earth and land at a site in Inner Mongolia.

Yu Dengyun, deputy chief designer of China's lunar exploration project, told China's state television network that this mission will be very complex, pointing out that "we launch rockets on the ground with relatively mature technology, but we are using the lander as the launching platform on the lunar surface. How to dissipate heat, how to divert flows and how to control the rising process are what we have never done before. These are hard nuts to crack."

The launch had originally been planned for 2017, but was postponed due to an engine failure in the Long March 5 rocket, according to Nature.

In addition to rocks, Chang'e-5 also hopes to collect dust and other materials that will help scientists learn more about the Moon's history. One specific detail that scientists hope to figure out is precisely how long ago the Moon ceased having active volcanism on its surface. While previous samples indicated that the Moon's volcanoes may have ceased being active 3.5 billion years ago, some scientists believe it could have been closer to 1 or 2 billion years ago.

Scientists also hope to learn more about the unusual composition of that region of the Moon, which contains rare earth elements, potassium, phosphorus, thorium and uranium.

Overall, the lunar materials could help scientists learn more about the origins of the planet Earth, the Moon and the formation of our solar system.

"This is a really audacious mission," David S. Draper, the deputy chief scientist at NASA, told The New York Times. "They're going to move the ball down the field in a big way with respect to understanding a lot of things that are important about lunar history."

The last lunar mission to successfully bring back rock samples was that of the Soviet Union's Luna 24 spacecraft, in 1976, although that mission only managed to collect roughly one-third of a pound of lunar material. There were three successful Soviet Luna missions in the 1970s, all unmanned, which retrieved roughly 10 ounces of material from the Moon.

In addition, NASA's manned Apollo missions retrieved 842 pounds of Moon rock and soil in total. The samples gathered by the Apollo and Luna missions are still being studied by scientists today.

"This was an incredible feat – and today we've advanced both science and engineering and our prospects for future missions to study these mysterious ancient storytellers of the solar system," Thomas Zurbuchen, associate administrator for NASA's Science Mission Directorate at the agency's headquarters in Washington, said in a statement.

For all the hundreds of unmanned probes in the history of human space exploration, sample return missions are very uncommon, due to the added engineering costs and fuel needs. Indeed, most unmanned probes explore bodies in the solar system and either remain there or fly by their targets and continue into space, like the Pioneer and Voyager missions. Besides the Moon, the only solar system bodies to have samples returned from Earth are one asteroid, a comet, and a solar wind sample. Likewise, there are two sample-return missions currently en route back to Earth: the Japanese space agency's Hayabusa2, which took samples from a near-Earth asteroid dubbed Ryugu; and a NASA spacecraft called OSIRIS-REx, which briefly touched the surface of the asteroid Bennu to gather rocks and pebbles from its surface. Hayabusa2 is scheduled to return to Earth with its samples in a couple weeks, on December 6.