"I would be lying to you" if I predicted Supreme Court would overturn the election for Trump, Ingraham admits 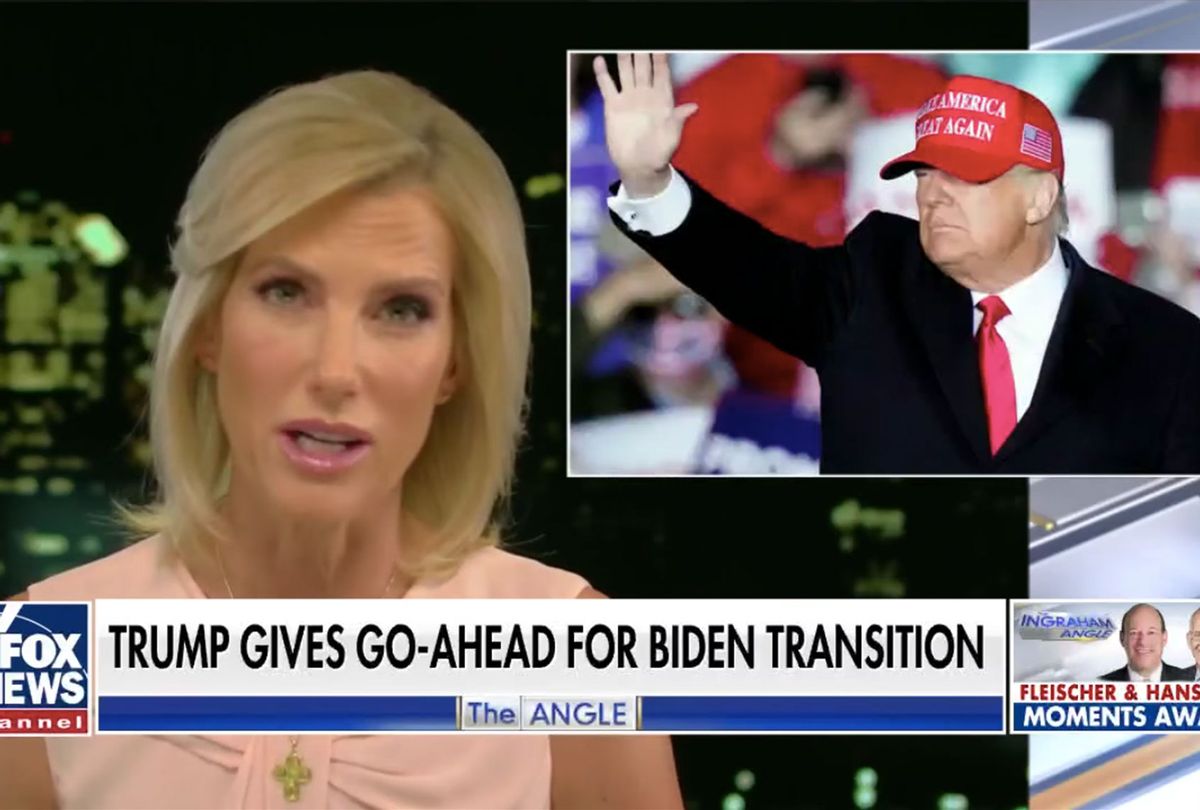 Fox News host Laura Ingraham acknowledged on Monday that President-elect Joe Biden would be inaugurated in January after the Trump administration allowed the transition to begin.

"Unless the legal situation changes in a dramatic, and frankly, an unlikely manner, Joe Biden will be inaugurated on Jan. 20," Ingraham said.

"To say this constitutes living in reality. And if I offered you a false reality — if I told you that there was an excellent, phenomenal chance that the Supreme Court was going to step in and deliver a victory to President Trump — I would be lying to you," the Fox News host later added.

Ingraham noted that the Trump administration had formally allowed the transition to begin.

"As unpleasant and disappointing as these past three weeks have been to so many of us, as much as we wish things were different, this is where things stand tonight," she said.

Trump said on Twitter that he had given Emily Murphy, the head of the Government Services Administration, the go-ahead to "do what needs to be done with regard to initial protocols." (Murphy claimed in her letter to Biden that she had acted on her own.)

Murphy had refused to sign the paperwork ascertaining Biden's win to allow his transition to formally begin before enough states certified their results to put the president-elect over 270 electoral votes on Monday.

Despite allowing the transition to begin, Trump declared that "we will prevail" and vowed to "never concede to fake ballots & 'Dominion,'" a reference to a baseless conspiracy theory about voting machines switching votes that led to attorney Sidney Powell's ouster from his legal team.

Fox News host Tucker Carlson railed against Powell's unfounded conspiracy theory, publicly calling her out for failing to produce any evidence to back up what would amount to one of the biggest scandals in American political history.

Multiple judges have rejected virtually all of the claims from Trump and his allies alleging fraud, because there is no evidence to substantiate them. In spite of this, Ingraham continued to sow doubt in the result even as she admitted Trump's defeat.

"To say this does not mean I don't think that the election was rife with problems and potential fraud. And to say this does not constitute being a sell-out to the conservative populist movement," she said. "And it does not mean that I disagree at all with the president's right and obligation to pursue all legitimate legal challenges to this outcome."

This appears to be the new line among Fox News opinion hosts, who have resisted echoing specific unfounded allegations made by Trump's legal team but expressed doubt about the "fairness" of the results — even though there is no evidence of widespread fraud or irregularities. In fact, while Trump lost, Republicans outperformed expectations in their Senate and House races while winning far more state legislative majorities across the country.

"The 2020 presidential election was not fair. No honest person would claim that it was fair," Carlson said on his Monday broadcast. "On many levels, the system was rigged against one candidate and in favor of another, and it was rigged in ways that were not hidden from view. We all saw it happen. The media openly colluded with the Democratic nominee. Joe Biden and Kamala Harris refused to explain what they would do if they were elected. That's never happened before in any presidential election in American history."

Carlson's complaint was misleading given that the Biden-Harris team released copious documents detailing their plans while Trump repeatedly failed to explain on Fox News what he intended to do in a second term.

Both hosts have had to defend their acknowledgment of Trump's legal failures amid attacks from Trump supporters. With most Republican officials around the country silent, 77% of Trump voters say they believe Biden won due to fraud — even though Trump's team has produced zero evidence. Trump has amped up his attacks on Fox News, urging viewers to switch to the even more far-right OAN or Newsmax, where the race still has not been called despite key swing states certifying their results. In fact, one OAN host is currently working with Trump's legal team, according to The Daily Beast.

"TIME TO MAKE OAN & NEWSMAX RICH. FOX IS DEAD TO ME!" actor Randy Quaid said in a bizarre video retweeted by the president on Tuesday.