Thank you, Gritty, for rallying with us to save our democracy 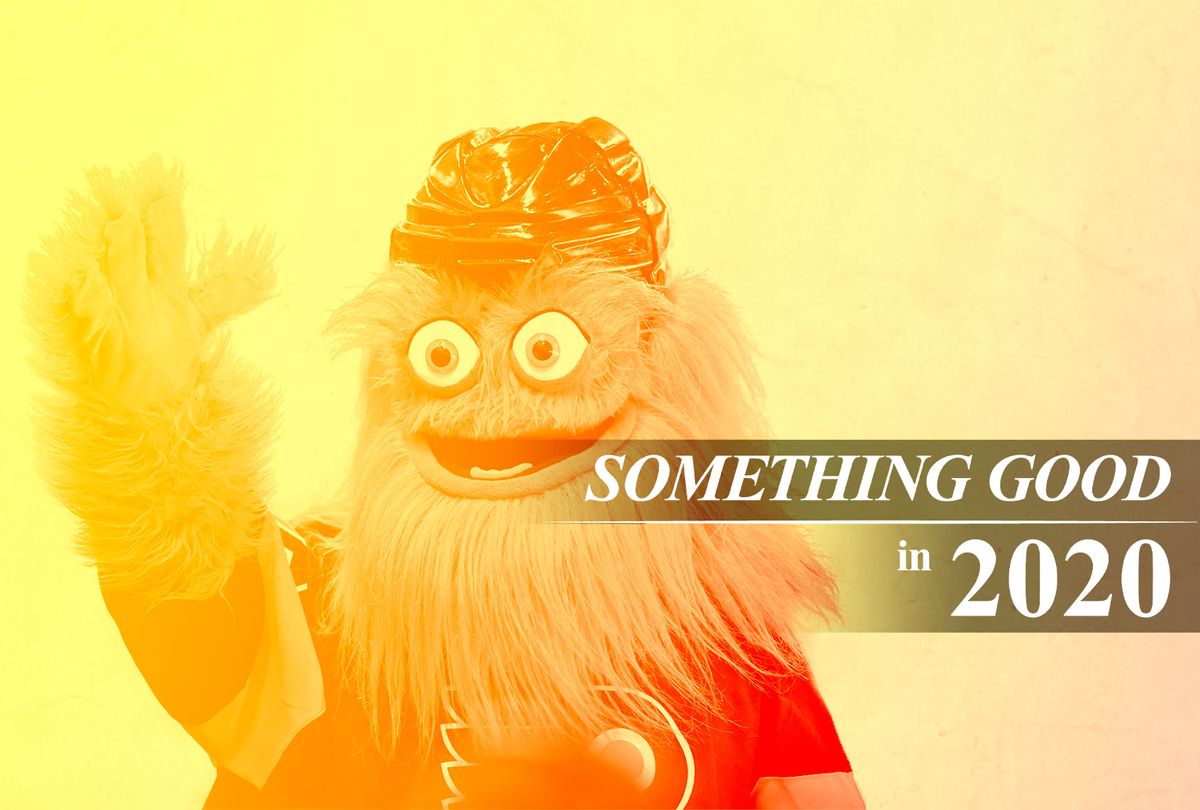 I'm not saying we moved to Philadelphia two years ago because of Gritty. Our official story is we  wanted an affordable house in a walkable city with the cultural amenities we'd grown accustomed to in New York City. And yet the furry orange mascot for the Flyers, Philly's hockey team, did speak to us as we walked around our newly chosen home, and not just because his googly eyes constantly peek at you in South Philly from murals and coffee shop chalkboards.

Gritty, who became a Philly icon within moments of being unveiled in the fall of 2018, really captures the soul of the city: dirtbaggy, no f*cks given, but still kind-hearted. His floofy orange visage made us feel at home.

As Eduardo García-Molina said on Twitter, Gritty is "the manifestation of their city as a god, like Roma."

Which is why it was a pure delight to see Gritty become the de facto mascot of the hard-won defeat of Donald Trump in 2020. Gritty wasn't just a symbol of l'esprit de Philadelphia. He embodied both the decency and barely-managed chaos of the broad Democratic coalition that managed to pull together to kick Trump out of office.

The ostensible reason Gritty memes and jokes flew across the internet, of course, was the lengthy fight over vote-counting came down, as many predicted it would, to the city where American democracy was invented. Images of the tangerine hairball became shorthand for Philly dragging Joe Biden across the line to victory, a fun joke about how democracy was saved by one of the proudly goofier cities in the country.

When Rudy Giuliani and Eric Trump tried to marshal an anemic group of MAGAheads to intimidate vote counters at Philadelphia Convention Center, they were driven off by a crowd of locals, many with the requisite Gritty drawings on their cardboard signs. For days, as vigilant residents stood watch over the convention center, protecting their right to vote, Gritty signs and people in Gritty costumes were a mainstay. When Biden's victory was announced, there was Gritty, in costume and drawing, sprinkled throughout the crowd.

But Gritty was adopted as a lefty icon before even Philadelphia's votes were counted, and wholly without any input or consent from the Flyers management. (Still, the team leans into it — Gritty, for instance, was sporting lady's clothing  before Harry Styles graced the cover of Vogue.) Hard exactly to say why. The character just vibes with a progressive vision of the world, and was a reminder to hang onto your sense of humor even in the face of very serious threats.

The more that chaotic evil emanated from the orange guy in the White House, the more comforting it was to imagine Gritty pushing back with a chaotic good energy from our nation's first capital. So it was especially satisfying to make Gritty the face of the millions of Americans — and hundreds of thousands of Philadelphians — who finally crushed Trump's dreams of domination.

I'm still relatively new to Philly, especially since the quarantine has kept us sequestered at home for eight months. But I love this city — not just in spite but because of its messy spirit. Like Gritty, Philadelphia is unkempt and manic. But when you need to save democracy, Philly is clutch.