The conservative conflation of queer aesthetics and anti-capitalism ideology has a storied history in the U.S. 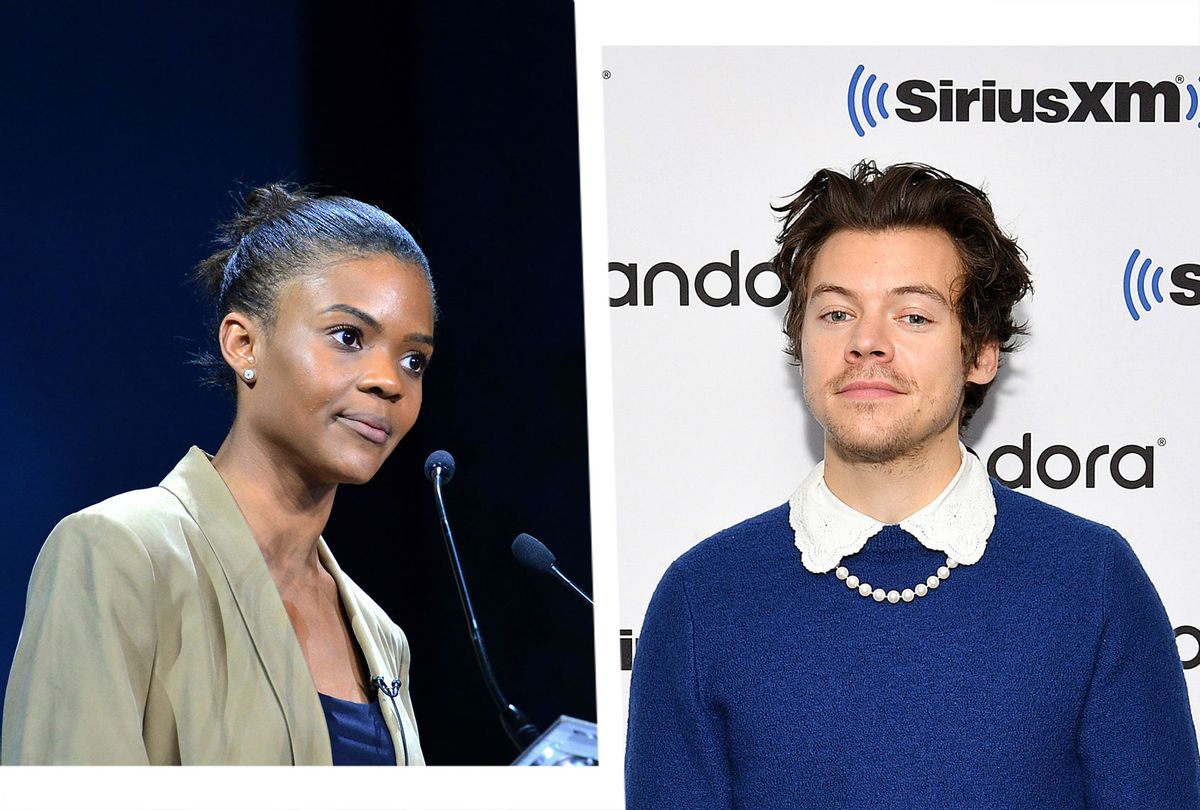 An image of Harry Styles wearing a periwinkle Gucci gown with a slim black blazer is going to single-handedly dismantle good ol' rugged American masculinity. Or at least that's what right-wing commentators want their followers to believe.

Styles — who was a teenage heartthrob in the 2010s as part of the boy band One Direction, and has since released two wildly successful solo albums and made his acting debut —  became Vogue's first-ever male cover model last Friday. In the photograph, the dress-wearing Styles is situated in a pastoral meadow with his hair slightly mussed. He looks into the distance, while holding a yet-to-be-inflated blue balloon up to his lips, while the gauzy skirt cascades off the page. The phrase "Harry Styles Makes His Own Rules" is splashed across his waist.

In the Vogue interview, Styles reveals he often goes into shops and finds himself looking at women's clothing because the items are "amazing."

"There's so much joy to be had in playing with clothes," he says. "I've never really thought too much about what it means — it just becomes this extended part of creating something. Now I'll put on something that feels really flamboyant, and I don't feel crazy wearing it. Clothes are there to have fun with and experiment with and play with. What's really exciting is that all of these lines are just kind of crumbling away."

Conservative commentator and pro-Trump activist Candace Owens disagreed. On Monday, she retweeted an image of Styles' Vogue cover and wrote, "There is no society that can survive without strong men."

She continued: "The East knows this. In the west, the steady feminization of our men at the same time that Marxism is being taught to our children is not a coincidence. It is an outright attack. Bring back manly men."

The tweet was like a catnip for fellow conservatives. It racked up nearly 110,000 likes and commentator Ben Shapiro responded within hours, "This is perfectly obvious. Anyone who pretends that it is not a referendum on masculinity for men to don floofy dresses is treating you as a full-on idiot."

There are two dominant, but deeply interwoven, threads in Owens' tweet that bear pulling: there's the right's obvious, knee-jerk discomfort with sexual ambiguity and shifts in our cultural understanding of masculinity, and then there's the Marxism red herring, which points to something essential for understanding her fearmongering.

While this situation may read like a completely modern phenomenon — social media discourse based on a the cover of a magazine catering to the trend of non-binary dressing, which is increasingly popular with millennial and Gen-Z buyers — the conservative conflation of queer aesthetics and anti-capitalism ideology has a storied history in the United States.

According to historian David K. Johnson, the "Lavender Scare," a moral panic during the mid-20th century about LGTBQ members of the United States government, fanned the flames of the Red Scare, the widespread fear of a potential rise of communism or anarchism that was prevalent in the States after both World Wars.

"In popular discourse, communists and homosexuals were often conflated," Johnson told the University of Chicago Press. "Both groups were perceived as hidden subcultures with their own meeting places, literature, cultural codes, and bonds of loyalty. Both groups were thought to recruit to their ranks the psychologically weak or disturbed. And both groups were considered immoral and godless. Many people believed that the two groups were working together to undermine the government."

As a result of these fears, which were largely spearheaded by Senator Joseph McCarthy and then codified when President Dwight D. Eisenhower signed Executive Order 10450 that "barred homosexuals from working in the federal government," nearly a thousand LGBTQ staff were forcibly outed and fired from the State Department.

Though the main vein of McCarthyism petered out in the late '50s, the Lavender Scare lived on in other branches of the government, notably through the military's Don't Ask, Don't Tell policy. It wasn't until 2017, after prompting from Maryland Sen. Ben Cardin, that the State Department formally apologized for the investigations and terminations, which continued as late as the 1990s.

The Lavender Scare also had a lasting impact on our current definition of masculinity and attitudes towards the LGBTQ community.

"Our current definition of masculinity is very limited, and it's that limited understanding of what it is to be male that may lead us to aggression," said psychologist Hector Torres in an interview with the American Psychological Association. "By having a limited scope of coping mechanisms, we go very quickly to explosion and aggression."

That can be especially true when others question a young man's masculinity, said Torres, adding that being called "gay" is often the worst possible insult among adolescent boys. And when men display characteristics that register as more traditionally female — such as being soft-spoken, displaying empathy, crying — their masculinity is called into question and, in extreme cases like the Owens/Styles situation, they're held up for examination for social and political deviance.

This dichotomy between what conservatives view as "manly" and what contemporary masculinity should encompass has been on full display throughout the Trump presidency. After President-elect Joe Biden's October ABC News Town Hall, Mercedes Schlapp, a senior adviser to the Trump campaign, tweeted that watching Biden was like "watching an episode of Mister Rodgers [sic] Neighborhood."

As Salon's Melanie McFarland wrote in 2018, the actual Fred Rogers was "unwavering in his presentation of gentle masculinity."

"The host of 'Mister Rogers' Neighborhood' had a kind, soothing voice that never spiked in frustration or sagged with sorrow, even in episodes navigating such rocky emotional terrain as divorce, or death, fear or anger," she wrote. "He never roughhoused with guests or invalidated the observations of the children to whom he spoke. Above all, he celebrated the importance of feelings, the very thing boys are too often counseled to ignore or stifle."

It's the kind of masculinity that stands in contrast to Trump's overt, if pugilistic, hypermasculinity, which was a defining characteristic of his campaigns and presidency — whether he was, as NPR's Danielle Kurtzleben put it, "talking about his testosterone count or his penis size or shrugging off the infamous Access Hollywood tape, in which he talked about committing sexual assault as 'locker room talk.'"

Nor, likely, would Harry Styles — though his brand of bucking the constraints of American masculinity is garbed in a Gucci gown instead of a button-down cardigan and paired with a certain rock star swagger perfected first by gender-bending icons like Prince and David Bowie. (Though the recent images of Styles feeding a fan's fish are reminiscent of Rogers feeding his own fish).

In both cases, these men's choices in gender presentation don't sit quite right with some conservatives. It reminds me of an "SNL" sketch from earlier this year, in which Kate McKinnon plays Fox News host Laura Ingraham.

As Ingraham, McKinnon cites a list of things Americans should be more concerned about than the coronavirus, including women keeping their maiden names, fat Barbies, a group of teenage girls practicing a quinceanera dance in the park . . . and Harry Styles.

"What's he doing?" she asks, voice dripping with suspicion. "Who is that for?"

I guess the answer is for people who want a broader, arguably healthier definition of masculinity than Candace Owens'.