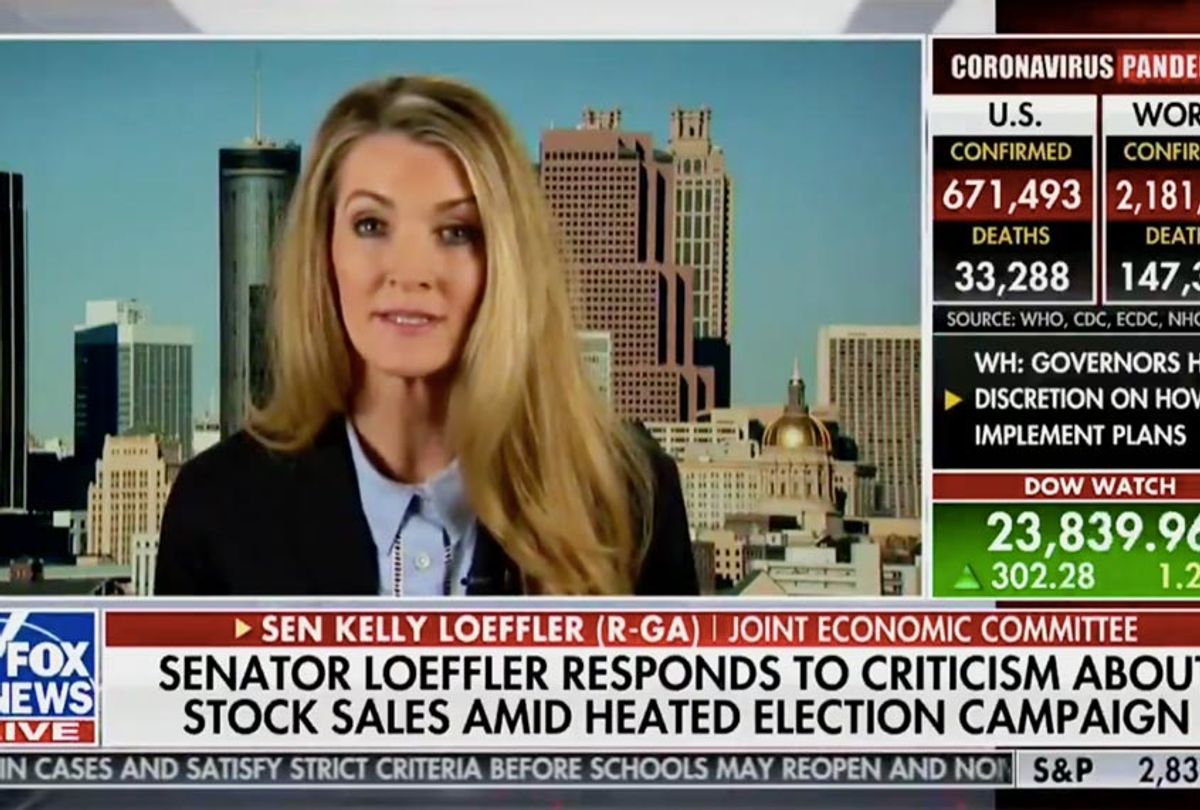 Sen. Kelly Loeffler, the ultra-wealthy unelected Georgia senator facing a runoff election this January that may determine control of the U.S. Senate, came under the scrutiny of government and Senate investigators this spring amid press reports of stock trades made after she attended a private briefing in January about the coronavirus pandemic.

Loeffler argued that she and her husband, Jeffrey Sprecher, chair of the New York Stock Exchange, had complied with insider trading rules, which require executives of publicly traded companies to wall themselves off from market transactions by setting up a pre-planned investment schedule executed by a third-party broker.

The Republican-led Senate and the Department of Justice both investigated the trades, but both probes were later dropped. It is still unclear, however, what came of a Securities and Exchange Commission investigation. The Loeffler campaign released an ad this spring, called "Cleared," which claimed that the "fake news" had "lied" about her trades.

But the broader context of Loeffler and Sprecher's transaction history over the last several years shows that they made a number of significant changes to their pre-scheduled trading plan this year. Those revisions included Sprecher quadrupling sales of stock in his company, Intercontinental Exchange (ICE), the parent company of the New York Stock Exchange and one of the most influential financial institutions in the world.

A veteran corporate attorney who defends companies in securities cases told Salon that the couple's trading patterns with ICE, especially Sprecher's, got "blown out of the water this year."

"These sales are not explicable based on his prior trading history," the attorney said.

The changes appear to have come as Loeffler was appointed to her Senate seat by Georgia Gov. Brian Kemp, and two weeks before she received an unusually structured $9 million severance package from her husband's company, where she had worked as CEO of a subsidiary that focused on cryptocurrency.

Public filings with the SEC show that the new plan doubled the frequency and more than doubled the volume and value of sales of the couple's ICE stock. The tens of millions of dollars in sales present a separate issue from the hundreds of thousands in sales in individual stocks that first drew scrutiny this spring.

Overall, the couple's 2020 capital gains income for ICE stock alone, $58 million, are more than double they amount they earned in any of the previous four years:

Last week Loeffler was the subject of a Senate ethics complaint after she asked Georgia voters for "five or 10 bucks" during an interview in the halls of the Senate — a violation of Senate rules and federal law.

"Look, we know that hundreds of millions of dark, liberal money is pouring into our state," Loeffler told Fox News anchor Sandra Smith in a Wednesday morning interview. "That's why it's so important that everyone across the country get involved. They can visit Kelly for Senate dot com to chip in five or 10 bucks and get involved, volunteer."

The couple has so far poured $31 million into politics this year, $23 million of it to Loeffler's campaign, according to FEC filings, beginning with a $5 million loan last Dec. 27. About $8 million went elsewhere, including a $1 million donation to a Trump-backing super PAC this April, shortly after the insider trading allegations.

Loeffler and Sprecher also bought a jet in December for Loeffler to use on the campaign trail and trips from Atlanta to Washington, though it appears they may have written off the cost entirely through a corporate loophole in Trump's 2017 tax bill.

Both candidates now face runoffs. On Election Day, Loeffler edged out Republican rival Rep. Doug Collins, a Trump ally and fiscal hawk who attacked her wealth relentlessly throughout the year. Kemp had appointed Loeffler after the resignation of former Sen. Johnny Isakson, although Trump had recommended Collins.

Loeffler, who now faces a January runoff against Democrat Rev. Raphael Warnock, defended the timing of her ICE sales by pointing to an investment set up in advance and approved by the company. The SEC offers executives of publicly held companies the choice to trade through such an agreement, allowing them to access cash while guarding against the appearance of insider trading.

And as chairman of the NYSE, Sprecher must also abide by its rules, which define a conflict of interest as "when an individual's private interest interferes in any way — or even appears to interfere — with the interests of the corporation as a whole."

At the time of the trades, Loeffler sat on the Senate Agricultural Committee's subcommittee on commodities, risk management and trade, which directly regulates her husband's company. She recused herself after the trades became public, but still sits on the parent Agriculture Committee. (That committee also oversees her brother's soybean operation.)

"If you worry about looking suspicious, you set this up in advance to say, 'I have nothing to do with these trades,'" Marc Fagel, former director of the SEC's San Francisco office, told Salon. "But that becomes a less meaningful defense when you change your plan, which may appear as if you have nonpublic information, and you risk losing the whole defense."

Fagel concluded, "I'd counsel my clients hat you'd want to change your plan as infrequently as possible and make it as simple as possible. Generally the best practice is to have a regular sale, a set share amount and a set price. You want to have that new plan set up a quarter in advance."

Loeffler and Sprecher's trading appears to have fit that description for years. But this year they made major changes — perhaps to get tens of millions of dollars in extra liquidity in anticipation of funding Loeffler's political activity.

The largest sales, however, were carried out indirectly through a company called Continental Power Exchange (CPEX), which Sprecher solely owns and which holds more than twice as many shares of ICE as he does in his own name. So far this year, Sprecher has sold 360,000 shares through CPEX for a total of $33 million. Previously he never sold more than 80,000 shares in one year.

In March, ICE responded to reports about the sales in a statement that said its policy included a 30-day waiting period: "Per ICE policy, all trading plans require a 30-day cooling off period from the time the trading plan is adopted to the date of the first transaction."

To comply with that requirement, at the very latest the couple's plan would have been changed the day before Kemp, the Georgia governor, nominated Loeffler to the Senate on Dec. 4: The couple unloaded $8.3 million of ICE stock 29 days later, on Jan. 2.

Those changes would also have been put in place two weeks before Loeffler departed the company on Dec. 20, with a severance package that ultimately totaled some $9 million, after stock options were exercised.

That package, The New York Times reported in May, included more than $1 million in restricted stock and options that would have expired had the company had not taken the unusual step of intervening to make them mature immediately.

Furthermore, filings show that Loeffler cashed in on those options almost immediately, selling 30,000 shares on Jan. 2, 75,000 shares on March 11 and another 26,675 shares in late May. (Previously, Loeffler had personally sold more than 10,000 shares on only two occasions.) All those sales coincided with major CPEX sell-offs.

Typically individuals do not exercise stock options and sell immediately, because the profits of a lump sum in a single year might push them into a higher tax bracket. But Loeffler, already in the highest bracket, would not have those concerns.

The March 11 sale stands out for another reason: For four years, Sprecher only sold on the fourth Wednesday of the month. It's possible that in early December the couple chose the second Wednesday of March to make their largest sale yet — 175,000 shares between them, totaling $15 million — which happened to be just as the markets were crashing. It was also highly fortunate: Had they waited until their typical trading day, March 25, they would have missed out on $2 million in profits.

None of these sales were public at the time. It was only after their disclosure that Loeffler vowed to divest herself of all individual stocks. SEC filings show that she still holds upwards of $8 million in the company, however, and Sprecher currently holds about $475 million.

Furthermore, it is not clear how or when Sprecher structured his 10b5-1 plans to hit these dates. Neither ICE nor the Loeffler campaign would share documents with Salon. SEC experts Salon spoke with said that Sprecher undoubtedly changed his plans for himself and CPEX, upon learning his wife would be a U.S. senator.

Days after she was sworn in, Loeffler was named to the subcommittee that oversees regulation of her husband's company.

"I have worked hard to comply with both the letter and the spirit of the Senate's ethics rules and will continue to do so every day," she said at the time. Loeffler recused herself from the subcommittee in early May, as she was submitting documents to investigators from the DOJ, SEC and Senate.

"There's just not enough here to come to any conclusions, which is the biggest problem," Ben Edwards, a securities law expert at the William Boyd School of Law at the University of Nevada Las Vegas, told Salon. Edwards called upon a metaphor: "That might be a fire in your neighbor's yard, or he may have just put too many wood chips on the barbecue. It's exactly why we need to reform our transparency laws in government."

Fagel, the former SEC official in San Francisco, echoed the point. "Why should members of Congress be able to trade individual stocks, period?" he asked. "Just take it off the table. Then you don't have this taint of corruption, and cases like this show that's in everyone's interest."

In response to Salon's multiple detailed questions, ICE spokesperson Josh King said in an email, "Why don't you send me an email that says 'let's have an off the record conversation so I can be accurate and write smartly.'"

Salon declined. King would not comment further. It is unclear why he believed he could improve the accuracy of Salon's reporting with off-the-record remarks, although it's conceivable he did not want to offer public comments that could affect ICE's market performance or reveal private information.

"They may fear that once they start answering questions they may get more questions," Edwards remarked of the couple's reluctance to transparency. "They may feel it's intrusive and not want to make more than the legally mandated disclosures. It could be that some of their decisions, if they were public, could affect stock performance."

While the Justice Department closed its investigation, it is unclear what became of the SEC's probe into Loeffler and Sprecher. The campaign did not reply to questions, and the SEC would not comment on the existence of investigations. A senior law enforcement official not involved with the matter told Salon that in parallel probes like this one, the SEC's enforcement arm typically makes any decisions about civil citations or settlements independent from the Justice Department.

"The law is one dimension here, and at least on the criminal side it seems like this case was pretty clear-cut," the law enforcement official, speaking on the condition of anonymity, told Salon. "But not all wrongs, ethical or otherwise, are crimes."