Moderna requests emergency use authorization for its coronavirus vaccine. Here's what that means

"This is striking. These are amazing data," one doctor said of the Moderna vaccine candidate's clinical trial 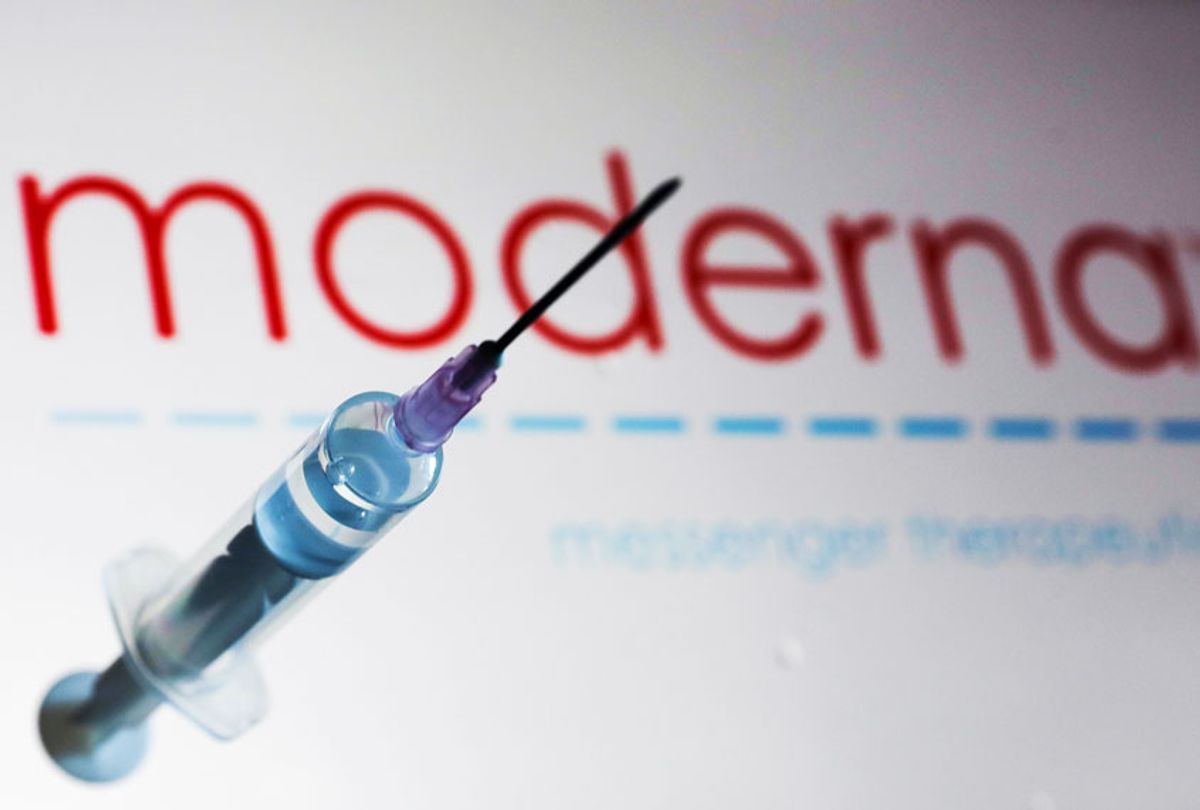 The American biotechnology company Moderna announced on Monday that it is asking regulators in the United States and Europe to allow emergency use authorization for their promising vaccine candidate. Their request comes only a week after two other pharmaceutical companies, Pfizer and BioNTech, made a similar request from the Food and Drug Administration (FDA).

Moderna, which worked with the United States National Institutes of Health to create its vaccine candidate, said that additional results received over the weekend confirmed a roughly 94% effectiveness rate, according to the Associated Press (AP). Moderna Chief Medical Officer Dr. Tal Zaks told the AP that after learning about the results, "I allowed myself to cry for the first time. We have already, just in the trial, have already saved lives. Just imagine the impact then multiplied to the people who can get this vaccine."

A member of the FDA's vaccine advisory committee had a similarly optimistic response. As Dr. Paul Offit told CNN, "This is striking. These are amazing data."

Moderna is not the first big pharmaceutical company to say that it is ready for emergency use authorizations. Pfizer and BioNTech submitted a filing to the FDA last week after its vaccine candidate was found to be more than 90 percent effective at stopping the pandemic.

"Filing in the U.S. represents a critical milestone in our journey to deliver a COVID-19 vaccine to the world and we now have a more complete picture of both the efficacy and safety profile of our vaccine, giving us confidence in its potential," Pfizer Chairman and CEO Dr. Albert Bourla explained in a joint statement released on Friday. "We look forward to the upcoming Vaccines and Related Biological Products Advisory Committee discussion and continue to work closely with the FDA and regulatory authorities worldwide to secure authorization of our vaccine candidate as quickly as possible."

It is important to note that an emergency use authorization, if granted, does not mean that the general public will have access to the vaccine. As Dr. Deborah Doroshow, an assistant professor of medicine at the Icahn School of Medicine at Mount Sinai, explained to Salon earlier this month, "an Emergency Use Authorization is not the same thing as FDA approval, nor it is saying the product is safe and effective. Simply, an EUA signifies that there is a serious or life threatening condition for which no approved or adequate alternative exists .... and that there is reason to believe the product may be effective and that the risks of using it most likely outweigh the benefits."

The next step for both Moderna and Pfizer/BioNTech is to see what the FDA's scientific advisers say as they publicly debate the evidence supporting their various vaccine candidates. The debate for Pfizer/BioNTech is scheduled to begin on Dec. 10, while Moderna is expected to make its case before the so-called "science court" exactly one week later on Dec. 17. If both vaccines are green-lit for emergency use by the FDA, Moderna expects to have enough of its vaccine ready for 10 million people by the end of the year. (It has 20 million doses ready but the vaccine requires two shots.) Pfizer has enough doses for 12.5 million people.

Because initial doses are limited, they are expected to be given to health care workers, the frail and elderly, residents at long-term care facilities, essential workers and people whose underlying health conditions put them at higher risk.

Experts do not believe that a vaccine will be ready for the general American population until at least early spring. In terms of production capacity, federal officials estimate that 25 to 30 million people will be able to be vaccinated per month. The US population is 328 million, and polls have found that about 72% of the adult population say they would get a coronavirus vaccine. That means it is likely to take about 7 to 10 months to produce and administer enough vaccines to inoculate all 200 million to 250 million Americans that would opt for a vaccine.

In other words, assuming all goes to plan, all Americans who want a vaccine will probably be vaccinated by fall or winter 2021. Based on the specific way the human immune system reacts to the novel coronavirus, there are still questions over whether humans would need to be re-vaccinated every year.

Both the Moderna and Pfizer vaccine candidates are mRNA-based vaccines, a very new technology. Short for "synthetic messenger RNA," mRNA vaccines use synthetic mRNA (the part of a living creature's DNA that tells cells which proteins to manufacture) to help the body's cells recognize proteins found in disease-causing microorganisms (in this case, the spikes in the SARS-CoV-2 virus that causes COVID-19). This makes the immune system able to effectively combat them.

One hurdle to production and distribution relates to the freezing temperatures that vaccines must be stored at to remain viable. Different vaccine candidates have different storage needs: Moderna's vaccine candidate must be kept at -20°C, although the company claims it can remain stable for up to one month at consumer refrigerator temperatures of 2°C to 8°C. Pfizer's candidate must be kept at -70°C, beyond the abilities of most commercial refrigerators.

"More 'end user' locations will be equipped to use the Moderna vaccine, with its less stringent cold chain requirements," Dr. Justin Lessler, an associate professor of epidemiology at Johns Hopkins Bloomberg School of Public Health, wrote to Salon earlier this month. "Likewise, if that vaccine is more thermostable it should be less sensitive to accidental breaks in the cold chain (e.g., a batch being left out on the table for longer than it should) which may increase practical effectiveness."

Lessler added, "That being said, Pfizer has shown commitment to overcoming the issues with distribution and they certainly can be overcome."