Scott Atlas is leaving the Coronavirus Task Force. Here’s why his departure is being celebrated 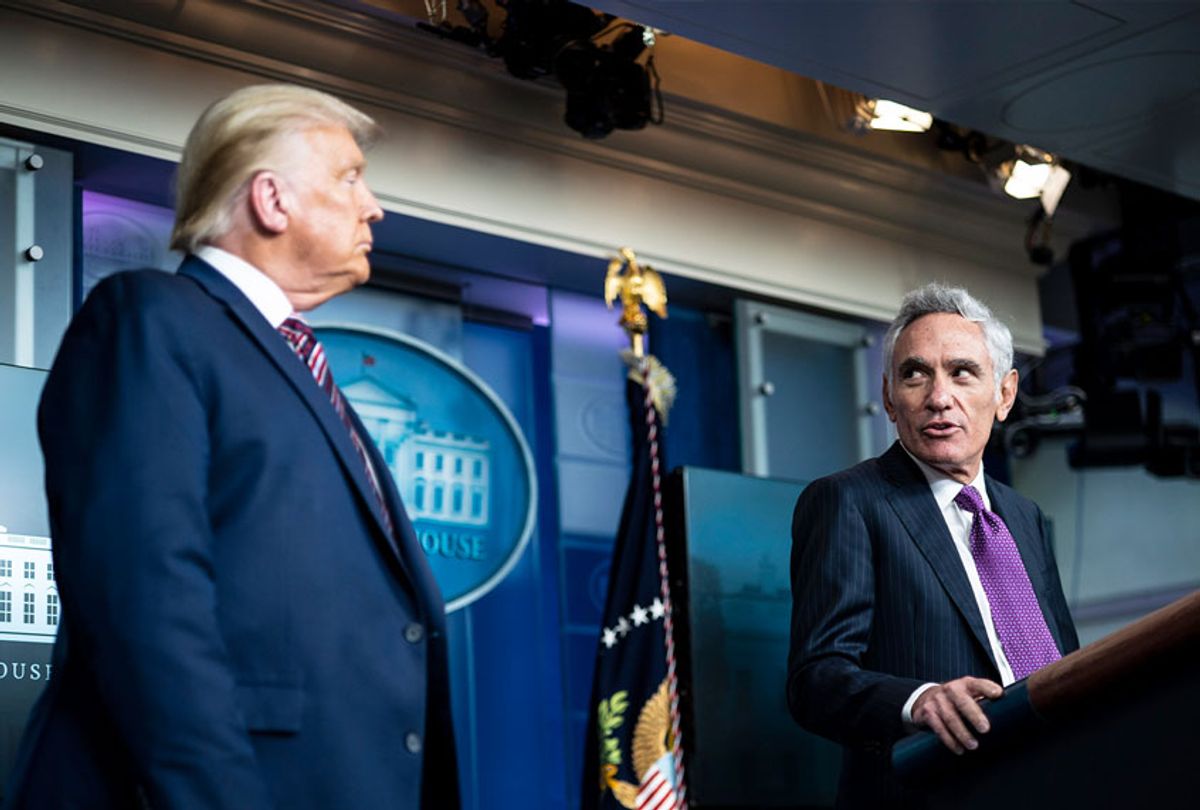 Dr. Scott Atlas, a senior fellow at Stanford University's Hoover Institution who became infamous for advocating bad science in ways that dovetailed with President Donald Trump's political agenda, announced his resignation from the White House Coronavirus Task Force in a letter on Monday.

Because Atlas was a special government employee, he was only eligible to serve for 130 days and his position was set to expire this week, according to CNN. Nevertheless, his departure is being celebrated because of his habit of spewing misinformation that served Trump's propaganda needs to the detriment of public health. This included claims that masks do not help stop the spread of novel coronavirus infections, that the seriousness of the pandemic was being exaggerated, that public health experts should not worry as much about children catching the disease, that the need for social distancing was embellished and that summer civil rights protests were to blame for novel coronavirus outbreaks.

One of Atlas' most harmful claims was that people could develop herd immunity as a way to effectively manage the pandemic, a belief that experts resoundingly and overwhelmingly reject. Perhaps his most notorious instance of making this assertion occurred in July, when he told Fox News radio that "when you isolate everyone, including all the healthy people, you're prolonging the problem because you're preventing population immunity. Low-risk groups getting the infection is not a problem. In fact, it's a positive."

Indeed, Atlas' habit of appearing on Fox News and echoing Trump's own pandemic talking points reportedly helped land him the ostensibly prestigious White House gig. As Matt Gertz wrote for Media Matters for America, Atlas' resignation put an end to "an experiment in governance by Fox News that has caused skyrocketing COVID-19 cases, hospitalizations, and deaths, with even darker weeks ahead." He also characterized Atlas' appointment as "the purest example of the disastrous impact of the feedback loop between President Donald Trump and Fox's propaganda."

Atlas' expertise was suspect from the start. As a neuroradiologist, Atlas' specialty is in using neuroimaging to treat ailments of the head, neck, spine and peripheral nervous system, not giving advice on dealing with highly contagious diseases. Nearly 100 of Atlas' Stanford colleagues made this point in a September letter that drew attention to their ethical concerns about a scientist providing a veneer of misleading expertise on a major public health issue in which he is not a specialist. In that letter, they argued that

any of [Atlas'] opinions and statements run counter to established science and, by doing so, undermine public-health authorities and the credible science that guides effective public health policy. To prevent harm to the public's health, we also have both a moral and an ethical responsibility to call attention to the falsehoods and misrepresentations of science recently fostered by [Atlas].

"I strongly endorse and agree with the letter from Atlas's colleagues that he does not understand, or is purposefully misunderstanding, the nature of the virus, this pandemic, and appropriate control activities," Dr. Alfred Sommer, dean emeritus and professor of epidemiology at Johns Hopkins Bloomberg School of Public Health, told Salon by email at the time.

Atlas has also made explicitly inflammatory political remarks. Last month, Atlas tweeted that Michiganders should "rise up" against Democratic Gov. Gretchen Whitmer after she ordered a three week freeze on in-person learning as well as the use of dining, stadium events, non-professional organized sports and indoor theaters. He made his comment only a month after it was revealed that six men had been arrested for allegedly plotting to kidnap Whitmer and overthrow Michigan's state government.

Whitmer responded to Atlas' tweet by telling CNN's Wolf Blitzer that "we know that the White House likes to single us out here in Michigan, me out in particular. I'm not going to be bullied into not following reputable scientists and medical professionals." She later told MSNBC's Joe Scarborough that Atlas' comments "actually took my breath away, to tell you the truth."

In the letter announcing his resignation, Atlas defended his record, claiming that he relied on science and avoided politics in his decision-making. He also praised his opposition to prolonged lockdowns and congratulated Trump for his "vision."