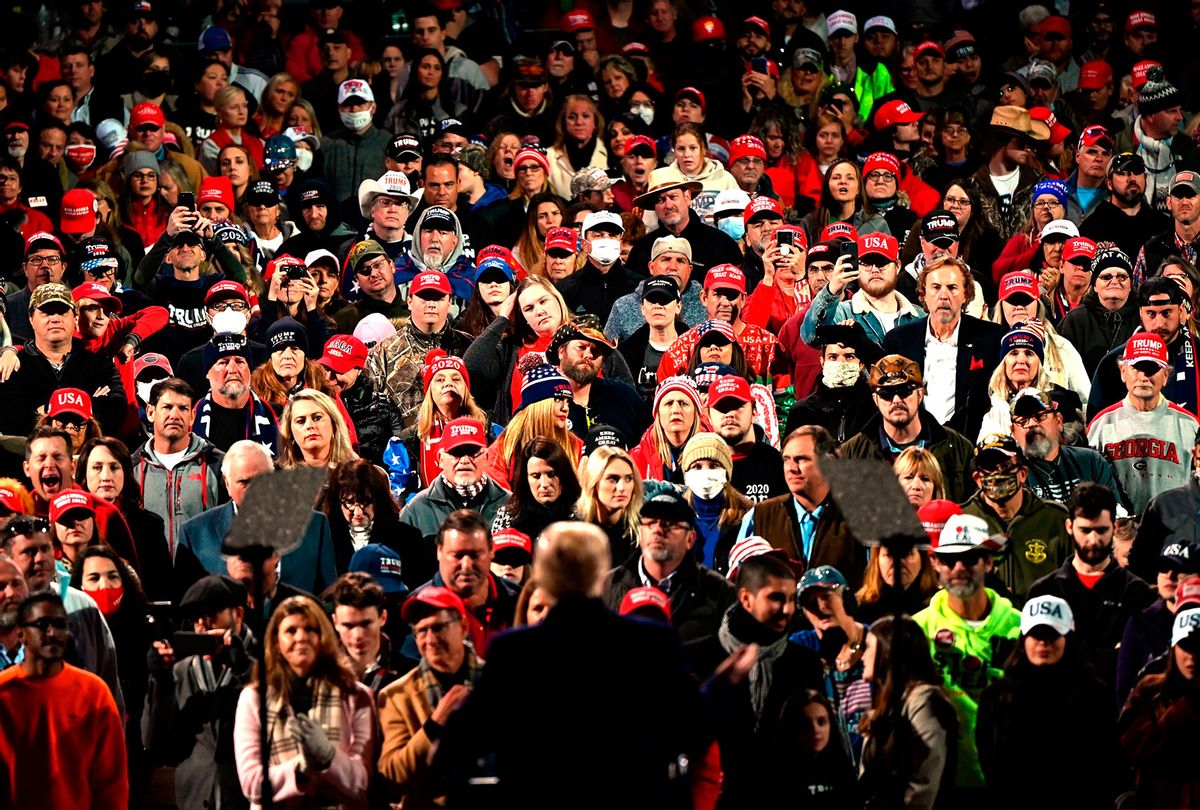 Supporters - most of them not wearing masks in the middle of a global pandemic - listen as US President Donald Trump speaks at a rally to support Republican Senate candidates at Valdosta Regional Airport in Valdosta, Georgia on December 5, 2020. (ANDREW CABALLERO-REYNOLDS/AFP via Getty Images)
--

Donald Trump encouraged coronavirus denialism for months for one simple reason: He thought it would help him win re-election. Ever the believer that appearances matter more than reality, Trump felt that as long as people acted like there was no pandemic — by refusing wearing masks and continuing to crowd into public places, especially his rallies — that was as good as there being no pandemic. The mounting death toll and hurricane-like effects on our health care system didn't matter to him, as long as he could pretend everything was doing well and take credit for it.

That was why I held out hope, in the days after Joe Biden was declared the winner of the presidential election, that Republicans would finally drop the act and start taking the pandemic seriously. After all, as Heather Digby Parton argued Monday morning at Salon, conservatives have a remarkable ability to discard their current enthusiasms the second they lose political value, and pretend that particular lunacy never happened. (You'd never know from its current behavior how gung-ho the American right was for the Iraq war 15 years ago.) It seemed entirely possible that in the face of rising case counts and Trump's defeat, the right would suddenly embrace public health measures and begin casually acting as if coronavirus denialism was never really a thing.

Unfortunately for the health of the nation, the opposite has happened. If anything, coronavirus denialism is as powerful a force as it was a month ago, when the media finally called the election for Biden.

On Saturday, Trump attended a rally in south Georgia, supposedly to support the Senate campaigns of Republican incumbents Kelly Loeffler and David Perdue. In practice, it was just another opportunity for Trump to whine at length about how he supposedly "won" Georgia (which he didn't) and how Republican state officials had conspiring to steal the election away from him (blatantly false, and also preposterous). The crowd ate these lies up, chanting "fight for Trump!" when Perdue and Loeffler bothered to peek their heads out at what was supposed to be their rally.

Just as alarming as the crowd's hunger to overturn democracy was the unwillingness of most attendees, who were packed shoulder to shoulder, to wear masks. The political usefulness of coronavirus denialism to Trump has ended. But for his avid supporters, continuing to pretend the pandemic isn't a problem — even as well over 1,000 people die every day — has clearly become an entrenched part of the "conservative" identity.

This attitude is reflected on Fox News, where the steady drumbeat of coronavirus denialism has not abated, even though it no longer has any impact on Trump's electoral chances. Over the past week, Fox News hosts have called for a "lockdown rebellion," celebrated businesses that refuse to take safety precautions, continued to bash Dr. Anthony Fauci and hyped snake-oil treatments over scientifically sound prevention techniques like social distancing and mask-wearing.

The situation is similar to the widespread support among conservative pundits and Republican voters for Trump's coup attempt. They know that Trump's chances at succeeding are effectively zero, but they keep on encouraging him anyway, because his rhetoric undermines democracy and sets the stage for future Republican power grabs that may well be more successful.

Clearly, coronavirus denialism has some ideological benefit that people on the right find gratifying, which is why it's continuing even though it no longer offers any political advantage to Trump. It likely serves the same purpose as backing Trump's coup, by providing cover for a direct assault on the concept of the common good, an attack on science and "elite" expertise, and an attack on the very idea that conservatives have any obligation to be responsible members of the American community.

For decades, right-wing media has conflated selfish behavior with "freedom," encouraging audiences to see any contribution to the collective good as an attack on human freedom, similar to the way liberals and progressives see assaults on reproductive or voting rights.

That's how universal health care got reframed as an attack on "freedom of choice," for instance. In reality, universal health care enhances freedom, making it possible for people to make important life decisions about where to work or whether to get married without being hamstrung by fear of losing health insurance. But after decades of right-wing propaganda equating any expansion of the public good with a loss of individual freedom, millions of voters were easily panicked at even the slightest moves towards expanding health care access.

This kind of rhetoric is being pushed by a wealthy conservative elite whose main goal is avoiding taxes and enforcing inequality, but the result is that any kind of civic responsibility is swiftly reframed as an attack on "freedom," no matter how nonsensical that may be.

This is most evident when it comes to the issue of mask mandates. By any sensible measure, being expected to wear a mask in public is no more burdensome than being expected to wear pants — arguably, mask mandates are even more reasonable, since there's a direct public health benefit. But precisely because the American right has absorbed the notion that any responsibility towards others is necessarily an attack on individual freedom, mask mandates are treated as a gross infringement on liberty, while no one seriously objects to shirt-and-shoes requirements in public or commercial spaces.

This knee-jerk assumption that helping your neighbor necessarily comes at great personal cost to yourself suits the wealthy interests of Republican leaders, because it justifies their opposition to taxes and regulation. But for everyone else, the losses are immense. The COVID-19 death toll is rapidly approaching 300,000 people, and soon there will be 15 million confirmed cases. The national failure to take the virus seriously has also undermined political support for more robust government relief, which means that countless more businesses will close and millions of jobs will be lost.

The "freedom" that was preserved is an illusion. If anything, people are far less free. If the pandemic had been more reasonably contained, it's easy to imagine a situation where lockdowns gradually lighten up as the vaccine starts to be distributed. As things stand, the safe bet is that most of us will be stuck at home until next summer — at the earliest — because the virus is so rampant that anything short of herd-immunity levels of vaccination will make it unsafe to resume anything like "normal" activity.

Trump's current coup against democracy is failing, but this will be his lasting legacy: Cementing the idea that childish and selfish behavior is somehow a sign of "freedom." The last remaining threads of conservatism as an ideology of "personal responsibility" are gone. Now the stance of the ordinary right-winger is that social responsibility, in and of itself, is a dreadful imposition that must be shunned. "Triggering" liberals is the only value left standing, and it remains the top priority even in the face of mass illness and death.