Despite public reporting, Trump campaign is still keeping Jason Miller's $420,000 salary a secret — but why? 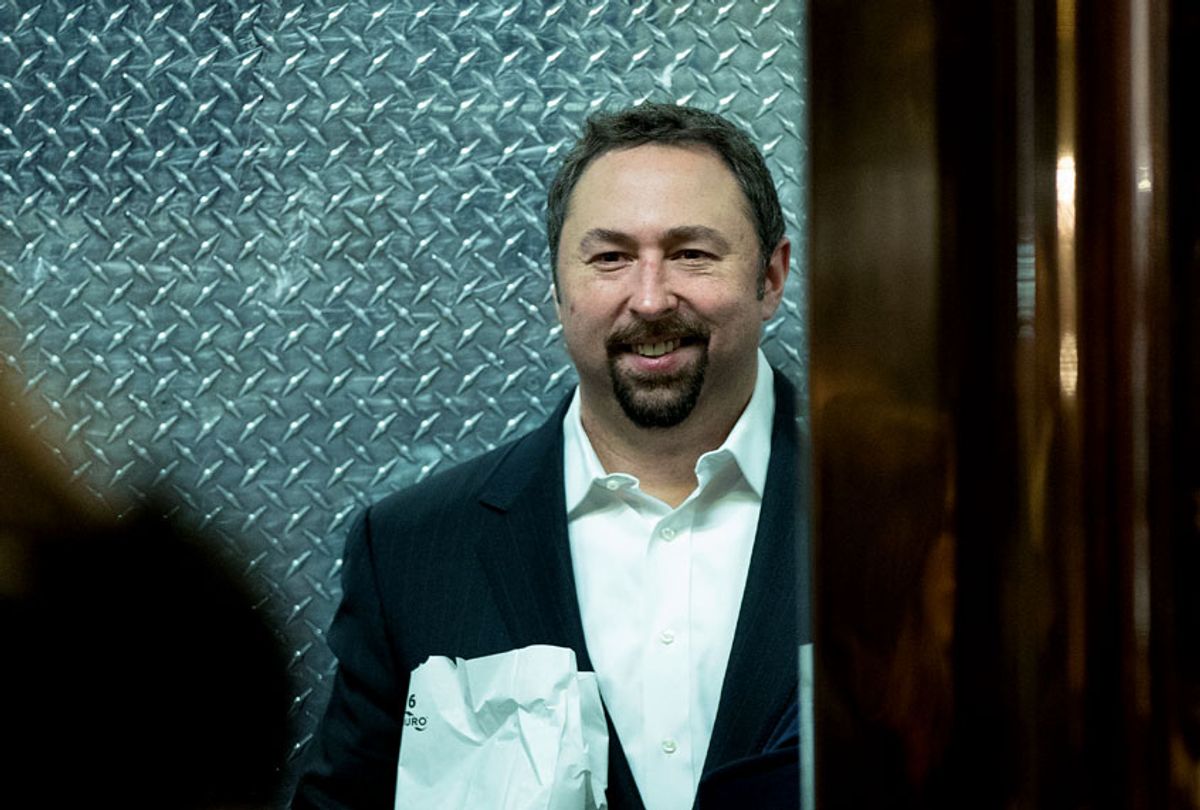 Jason Miller, communications director for the Trump transition team, arrives at Trump Tower, December 8, 2016 in New York City. President-elect Donald Trump and his transition team are in the process of filling cabinet and other high level positions for the new administration. (Drew Angerer/Getty Images)
--

Jason Miller, the chief strategist for outgoing President Donald Trump's 2020 campaign, told a Florida family court judge in a sworn affidavit filed last Friday that he expects to be unemployed beginning Dec. 15 — which is next Tuesday, the day after the Electoral College meets to ratify Joe Biden's election as president. As a result, Miller said, he projects that his net monthly income, which was $99,000 for July, will drop to zero.

The affidavit, filed in a child custody case and obtained by Salon, says in a footnote: "Father's current employment is expected to last until December 15, 2020, and he will earn $17,500 for the first half of December 2020. Thereafter, the Father will be unemployed with no source of income."

The Trump campaign has spent the last month trying to reverse Trump's defeat in a last-ditch crusade through the courts. Miller, a familiar face in the media, has played a central role.

Yet even though Miller does some of the most publicly visible work for the campaign, neither he nor the campaign have ever reported that the campaign pays him at all: His $35,000 monthly salary, marked for "video production," is first routed through one of the campaign's media contractors, Jamestown Associates, where Miller once served as an executive.

The arrangement appears designed to obscure the flow of money and conceal how much Miller makes from the woman with whom he fathered a child during the 2016 campaign. Campaign finance experts say the scheme is illegal.

A former top campaign official familiar with the arrangement told Salon that Miller, a senior adviser to Trump's 2016 bid who joined the re-election campaign in June, had negotiated the salary and third-party payment deal with top campaign officials, and that Jared Kushner had personally signed off. Jamestown execs were initially irked at being a go-between, according to the official.

Questions surrounding the payments, as well as Miller's mysterious and ever-changing monthly income, are not only important for transparency reasons, but also in order to determine how much Miller, who is married, should pay for child support to AJ Delgado, a 2016 Trump campaign official and the mother of his child. Their contentious case has dragged out for years in Florida court.

Over a period of several months between 2019 and 2020, Miller ducked payments to Delgado almost entirely, while reporting monthly incomes between $27,000 and $99,000. For a time that income included secret side payments from his former firm, Teneo, where Miller had collected a $500,000 salary until it severed public ties him in June 2019, reportedly as a result of crass insults he tweeted at Rep. Jerry Nadler, D-N.Y.

During this boom time, however, Miller paid Delgado, who is unemployed, as little as $500 a month — one-sixth of what a court had demanded. That was the bare minimum required by the state for a parent who makes $2,300 a month. Miller's financial affidavits make clear that he spends that amount or more every month just on expenses related to his cars.

In Miller's initial parenting plan, filed in May 2019 when his son with Delgado was less than two years old, the campaign's go-to media man expressed no desire to see his son: "This parenting plan does not contain any time sharing between the child and the father."

Miller also claims in his affidavits that he owes exactly $500,000 in federal and state taxes, though it is unclear how the self-employed contractor arrived at that number. He refuses to tell Delgado whether he receives checks from either Jamestown Associates or the Trump campaign.

Campaign finance experts tell Salon that on its face, the triangular arrangement appears unlawful: It is illegal to conceal or lie about the true purpose of expenditures on federal reports.

"It is totally legal and not really out of the ordinary for a major figure on a campaign to be working through a consultancy. But then the payments are properly disclosed in FEC reports," Jordan Libowitz, spokesperson for the government accountability watchdog Citizens for Responsibility and Ethics in Washington (CREW), told Salon. "What you can't do is mask the true reason for the spending."

There is one striking piece of clarity in the campaign's most recent Federal Election Commission report, however: After Salon's exposé last month, the Trump campaign stopped smuggling Miller's salary within a larger payment, as it had previously done. Instead, the campaign's filings now show two clear November payments to Jamestown Associates of $17,500 — exactly half of Miller's monthly salary.

Campaign finance experts say the campaign could conceivably justify this description if it successfully argues that Miller has indeed been doing that much work for Jamestown — offering direction or feedback on campaign videos, for example.

Such a setup would echo White House press secretary Kayleigh McEnany's thinly veiled moonlighting as a campaign official in her "personal capacity" during media appearances in the weeks before the election — a role which would otherwise violate the Hatch Act.

Libowitz told Salon, however, that it might be tough to sell Miller's work as an outside contractor, given his near-ubiquity as a senior campaign official on television and in the press.

"It's hard to fathom how someone could both be working for a campaign through a consultancy while also volunteering for it," he added. "And the work Miller is doing for the Trump campaign does not appear to be video production."

Stepien joined the campaign in December, but FEC filings do not disclose a campaign salary for him either. Reports suggest he took a 33% cut through another firm, Revolution Strategies LLC, when he stepped into the campaign manager role this July. But it is unclear why Stepien's other firm paid Miller while he worked for the campaign, allegedly for free.

But FEC filings show that National Public Affairs had several high-dollar candidate clients who did spots on former top Trump strategist Steve Bannon's podcast around the time of some of those payments.

Miller co-hosted that podcast, and Bannon's nonprofit, Citizens of the American Republic (COAR), paid him tens of thousands of dollars a month, effectually an annual salary of about $200,000, Salon reported. The organization is currently a subject of an ongoing federal fraud investigation as a vehicle Bannon allegedly used to fabricate invoices in furtherance of the scheme.

Those COAR payments continued through July. The next month, U.S. Postal Service agents arrested Bannon on a yacht belonging to a billionaire Chinese dissident a few miles off the Connecticut coastline. Federal prosecutors say in the indictment that they are seeking to seize assets belonging to COAR.

"These allegations are very serious and I hope that Steve has some good answers for the things he's been accused of," Miller told NBC's Chuck Todd following Bannon's arrest. "It's not something I worked on. I don't know anything about the financial dealings of this organization or how it worked, and I hope Steve has an opportunity to tell his side of the story."