Thinsplaining is real: Science says permanent weight loss is rare, and thin people don't get it

"It has nothing to do with willpower": A majority of people who lose weight will not be able to keep it off 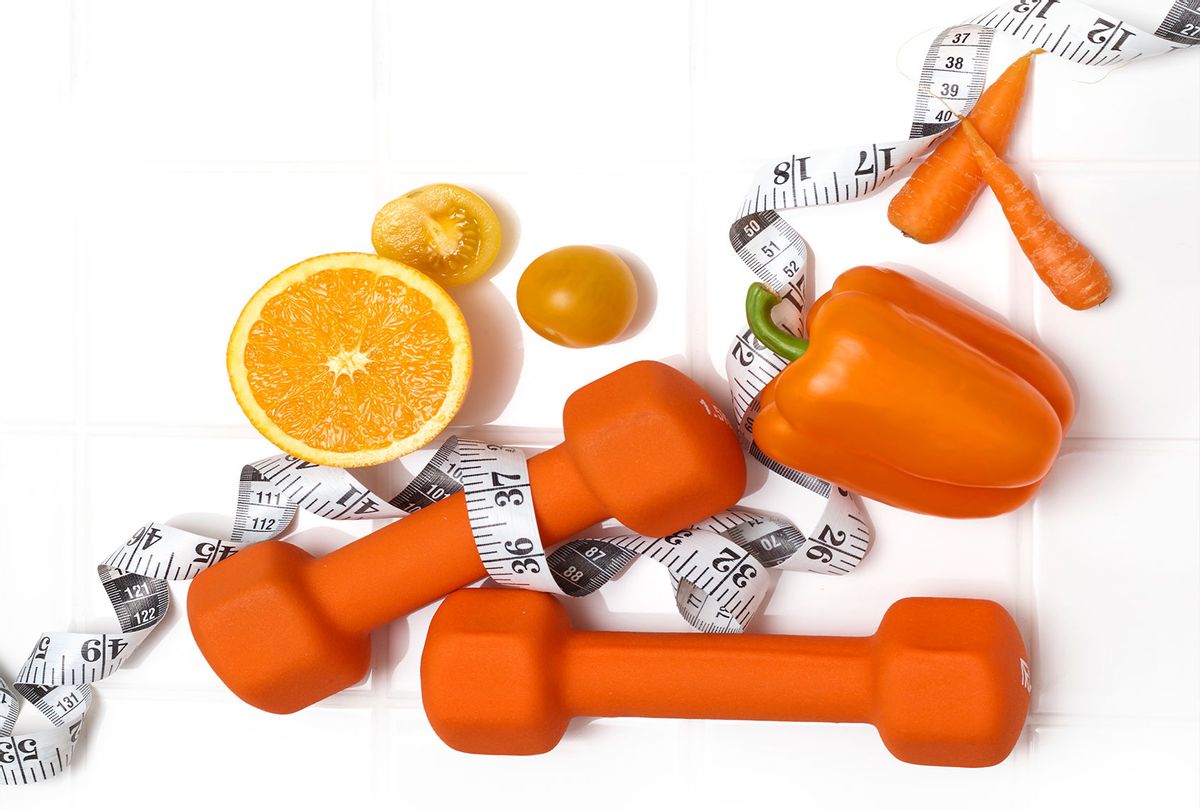 Holly Christine Brown has struggled with her weight for a long time. When she was thinner, people in her circle would tell her they were proud of her; when she gained weight back, some friends acted as though it were a personal failure. One boyfriend told her that he ended their relationship because she was "too fat" to have sex with. Others simply pulled away when she started gaining weight again. The cruel comments and social rejection made Brown feel anxious and depressed — which, in turn, drew her to food for comfort.

"Everybody expects that it's easy, that once you lose weight you can just keep it off," Brown, a professional writer, told Salon. "Anybody who has struggled with their weight knows that's not true because it's not like your relationship to other things that you might have an addiction to." Brown likened it to "an addiction," but noted that food wasn't like most truly "addictive" substances. "It's not a thing that you can cut out of your life entirely."

I understand how Brown feels all too well. As someone who has gained and lost large amounts of weight throughout his life, I have also experienced the shame of being judged by loved ones and strangers alike. There is a common narrative that if you can't lose weight and keep it off, it must reflect poorly on your character. The neologism "thinsplaining" refers to the situation in which people who have never struggled with their weight assume they are still qualified to give advice to, or pass judgment on, those who do. Both Brown and I reflected on our shared observation that this is one of those things a person can't really understand unless they have experienced it themselves.

There is a considerable amount of science backing up our point of view. If anything, the people who say that losing weight is simply a matter of possessing enough willpower to consistently eat right and exercise are the ones who ignore scientific fact.

"It has very little to do with will power," Dr. Nicole Avena, an assistant professor of neuroscience at Mount Sinai Medical School and a visiting professor of health psychology at Princeton University, told Salon. She explained that neuroscientific research has proved that "many foods are being found to be able to produce a state in the brain that is very similar to what you would see with an addiction to something like drugs or alcohol. And so our primitive brain is being activated by many of these processed foods that are on the market that many people enjoy and indulge in."

Like Brown, Avena liked the term "thinsplaining." "It's still like a drug addiction. Unless you or someone you're close with has struggled with addiction, people often will default with 'Well just stop using it, or why don't you just stop?'"

Lindo Bacon, PhD, is a scientist and author who has extensively studied the science behind losing weight. Bacon agrees that "science shows that losing weight is not about willpower, and not about exercise and diet."

As Bacon pointed out in an email, studies have found that "the vast majority" of people who lose weight wind up gaining it back even if they maintain their diet and exercise programs. Bacon said that a lot of this has to do with the way the human body goes out of its way to physically resist permanently losing weight; for instance, the body produces a hormone called leptin that inhibits hunger and decreases fat storage.

"When we examine the scientific mechanisms, it's clear why few people sustain weight loss," Bacon explained. "Dieting triggers compensatory mechanisms, like a drop in leptin as an example. Less leptin contributes to the urge to eat and to quit one's diet; it also drives a decrease in metabolism that can compensate for eating less."

Traci Mann, PhD., a professor of psychology at the University of Minnesota who has run an eating lab there for over 20 years, explained to Salon in an email that you can draw a direct line between the physical mechanisms that make it difficult for people to either lose weight or keep it off — including "changes in people's metabolism, hormones, and attentional processing" — and the psychological obstacles that also arise.

"After calorie deprivation, people's attention changes, so that they are more likely to notice food if it is present, and they become preoccupied with thoughts of food," Mann wrote. "If you have to eat fewer calories to get the same weight loss, and if you feel hungrier than you normally would, and if you can't stop thinking about food, that makes it a whole lot harder to keep dieting."

As Bacon noted, "studies show that one-third to two-thirds of dieters regain more weight than they lost on their diets. Methodological problems have been identified that suggest that these studies likely underestimate the extent to which dieting is counterproductive and if we could do better research those numbers would look even worse."

Virtually every other reliable statistic you will find about losing weight and keeping it off reveals the same thing. A 2010 study by Penn State College of Medicine researchers found that roughly one out of six Americans who have ever been overweight or obese permanently lose their excess weight. In 2015 the American Journal of Public Health found that in a given year the average obese man has only a 1 in 210 chance of returning to a normal weight; for women the odds are just slightly better, 1 in 124. (The study did not include people who had received bariatric surgery.)

The numbers are somewhat better for people who have bariatric surgery — a 2010 study found that only about half of the people who have had that type of surgery wind up regaining some or all of the weight they lost — but those surgery can lead to complications like intestinal blockages and long-term malnutrition. What's more, the Obesity Action Coalition reports that many people who successfully lose weight in the long-term after bariatric surgery wind up transferring their previous addiction to other substances or behaviors, indicating that the underlying psychological problems which drove them to obesity have not been addressed.

The bottom line is that the mind and body are intimately linked, and when it comes to weight issues, it is necessary to appreciate how emotional issues can cause obesity and make it more difficult to effectively address.

Ben Baker, a newspaper publisher who runs the southwest Georgia periodical "The Wiregrass Farmer," shared some of the emotional issues that he has experienced in his own struggles with his weight.

"A lot of people see food as a comfort item," Baker told Salon. "They eat because food makes them feel good and food has literally never let them down. They're let down by people." He added that, while people who try to give them advice often have good intentions when they do so, "the fat people take it as a personal attack and it hurts their feelings and they go try to find something to make them feel good and they go eat."

He also commented on how he has been hurt by the judgments people make about him because of his weight.

"People make fun of me all the time," Baker reflected. He commented that "there are other people who look at me and see that I'm fat, and they just write me off automatically as being lazy, possibly less intelligent, all kinds of things." It is as if, Baker mused, "they see being overweight, especially morbidly overweight, as a case of a person who has no self-esteem and they judge people on that. They say, 'Well, if you think you're worthless, I think you're worthless too.'"

In some cases, the perception of obesity emerges from medical conditions that will not dissipate with dieting. Just ask Crystal Willis, a publicist, marketing professional, influencer and entrepreneur who suffers from a condition called lipedema. The disorder, which affects up to 11% of women, causes enlargement of the legs because of the way fat is deposited beneath the skin.

"My legs were bigger ever since I was a kid, and doctors always told me I was obese and just needed to lose weight," Willis told Salon. "It wasn't till I was about 27 when I found out there was actually a medical reason why I was having trouble doing that."

Like Baker, Willis described to Salon how she has been regularly mistreated because of her weight.

"The main struggle has always been bullying and people looking at you and assuming that, because you're overweight that you're not trying hard enough or that you're not fit or that you don't live a certain healthy lifestyle," Willis told Salon, noting that she exercises regularly and maintains a healthy diet. Despite her many career successes, Willis says that she still routinely observes professional colleagues targeting her weight and her legs in order to put her down.

"I do believe I've experienced my fair share of discrimination as it relates to just opportunities that I get professionally or in dating," Willis told Salon. She also noted that her condition makes it difficult for her when it comes to buying clothes; for instance, she has never been able to wear boots, and when it comes to some of the most popular types of jeans and pants out there, "they're not made for women with body shapes like mine. They're not made for women with larger legs."

She has made it her mission, as she told Salon in an email, to show women with lipedema that "sexiness is a state of mind."

So what should you do if you love someone who is overweight or obese, and don't want to thinsplain?

"You really need to approach it more from the fact of trying to better understand what that person is going through, what their struggles are, where they find their successes, where they find their weaknesses, so that you can get a better understanding of what it's like to live in their shoes and to go through what they're going through," Avena told Salon. "And then when you do have that information, maybe you can offer some helpful insight. If you don't take the time . . . to try to understand why they're struggling and what are the hurdles for that, then your information is really just not going to be very helpful."