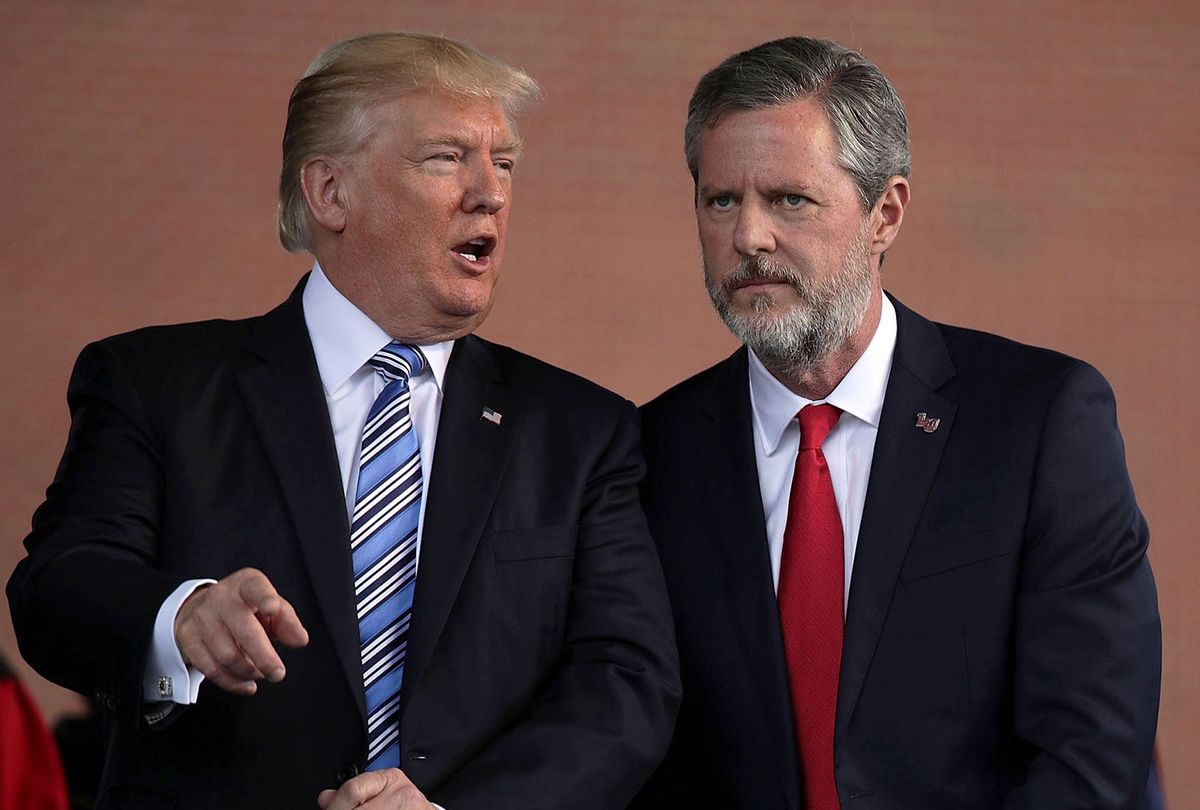 Jerry Falwell Jr., the disgraced former president of Liberty University, spent millions of the nonprofit religious school's funds to promote the Trump administration and the Republican Party, according to Politico.

Falwell, who was forced out in August amid a sex scandal and questions about his use of the university's funds, most notably launched a Liberty-funded "think tank" that reportedly paid for pro-Trump ads and hired members of President Donald Trump's circle. The think tank, the Falkirk Center, a play on the names of Falwell and fellow co-founder and pro-Trump activist Charlie Kirk, hired former adviser Sebastian Gorka and Trump legal adviser Jenna Ellis, who has most recently pushed the president's false fraud claims. The Falkirk Center also bought at least $50,000 in Facebook ads to promote Trump and other Republicans.

"Pray For Our President," one ad said. "Be a radical for our republic," said another ad promoting Rep.-elect Madison Cawthorn, R-N.C., who has faced allegations of racism, sexual harassment, and lying about his rejection from the US Naval Academy. The center also held a two-day event at the Trump's Washington D.C. hotel last year featuring former Trump adviser Steve Bannon, Sen. Tom Cotton, R-Ark., and Rep. Dan Crenshaw, R-Texas. The "think tank" has recently backed Trump's attacks on governors who imposed restrictions to contain the spread of the coronavirus.

Liberty's spending is "pushing the boundaries of its status as a nonprofit organization under Section 501c(3) of the federal tax code, which forbids spending money on political campaigns," noted Politico's Maggie Severns.

"The apparatus of the university has turned more and more towards political ends and concerns," Marybeth Baggett, a former longtime professor at the school, told the outlet. "Obviously the school is conservative, yes. But I don't feel like it was ever so agenda-driven as it was in the last four of five years."

"The full board did not know or approve that spending," a source told Politico, though enough members voted to allow it.

Falwell resigned with a $10.5 million exit package in August after a former business partner alleged that he had a years-long sexual relationship with Falwell's wife Becki while her husband watched. Falwell acknowledged his wife's affair but denied his involvement. He had already come under fire over a questionable photograph showing him and a woman posing with their pants undone and for tweeting racist images and making anti-Muslim comments.

Falwell later sued the university for defamation in October, arguing that it damaged his reputation by not working to verify the allegation about the affair but ultimately dropped the suit last week.

Falwell's departure has prompted unease among some university trustees about whether the school should remain involved in conservative politics or "refocus the university's evangelical roots," according to Politico.

"The board is split," one source told the outlet. "There are those who want the school to be part of the conservative political conversation."

Some board members have called for the Falkirk Center to be shut down and "don't think it helps the school in maintaining a high academic standard," the source added. "You can't really call something a think tank, and yet it doesn't put out academic research, or papers, or any kind of scholarship."

"The Falkirk Center, to me, represents everything that was wrong with Liberty when Jerry was there," added Karen Swallow Prior, a former longtime professor at Liberty. "It's brazenly partisan."

Liberty University spokesman Scott Lamb insisted that "while any academic think tank will have its detractors, the University and the Center have received hundreds of supportive emails" since Falwell's departure and that the "think tank" had a "pipeline of material for print publication in 2021."

Lamb said donations to other political organizations "are consistent with the mission and focus of Liberty University as an evangelical Christian university." He claimed that the organizations promoted nonpartisan causes like voter registration even though the Falkirk Center heavily promoted Republican candidates, including on a podcast. One episode following the Republican National Convention was titled "The Christian case for voting President Trump." The podcast has pushed Trump's false voter fraud claims since the election and hosted Trump attorney Rudy Giuliani on one episode. Earlier this month, the podcast also hosted a Liberty professor who called for state legislatures to overturn the results of their state's votes and appoint electors that would back Trump's failed bid.

"Just because you throw in the word 'nonpartisan' doesn't make it permissible," Adav Noti, a former Federal Election Commission attorney, told Politico. "It depends on the actual content. This question comes up a lot, and often it turns on the real details of who was in the room and what was said."

The IRS allows nonprofits with 501c(3) status to not pay income tax and accept tax-deductible donations but bars them from supporting political candidates.

But the IRS has been "reluctant" to look at donations and activities by religious institutions like Liberty University due to a lack of resources and allegations of political bias from conservatives and the Trump administration. That could change once President-elect Joe Biden takes office.

"Enforcement generally changes as the office changes. It depends on the interest of those in power," Daniel Romano, who heads up nonprofit services at the accounting firm Grant Thornton, told Politico. "They follow whatever marching orders they have."