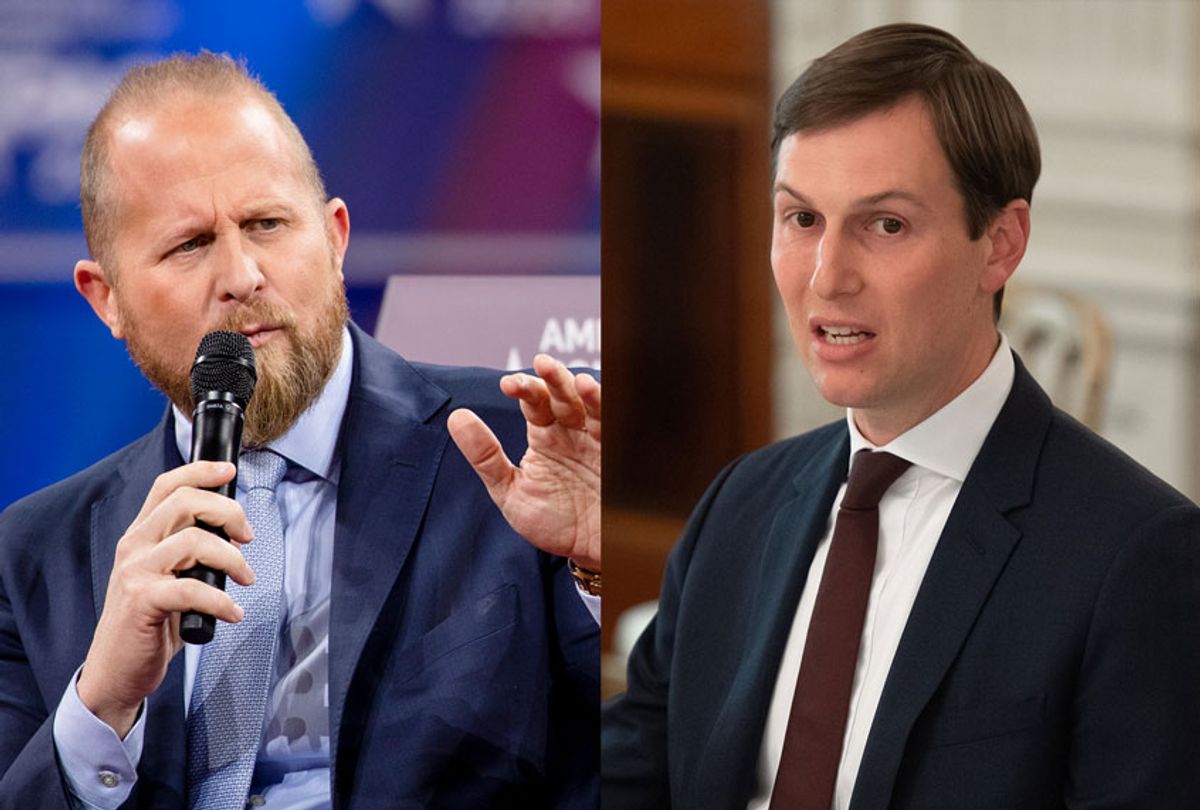 The company, American Made Media Consultants (AMMC), was launched in spring of 2018 and mostly served as a conduit for the campaign to pay media and advertising vendors. The entity also made it impossible for the public to see which vendors the campaign hired and how much they were paid. In all, the Trump campaign and sister committee Trump Victory reported that of the $1.2 billion spent on Trump's failed re-election bid this year, AMMC took about $617 million, or nearly half, according to Federal Election Commission filings.

AMMC looks to have essentially taken over the place of former campaign manager Brad Parscale's group, Parscale Strategy, after aides repeatedly voiced concerns to the president that Parscale was not being forthright about how he spent the campaign's money, according to a person familiar with the arrangement. While Kushner was not a driving force behind AMMC, the source who spoke on a condition of anonymity explained, the joint effort was led by campaign lawyers to reassure a paranoid Trump that no one was taking secret cuts. Parscale, it was thought, should not hold dual roles as head of a company serving as a campaign clearinghouse and campaign manager. Parscale and Kushner both signed off the arrangement, the source confirmed.

Campaign lawyers then suggested putting Trump's daughter-in-law Lara Trump and Vice President Mike Pence's nephew, John Pence, on the board, the only family members on the campaign, as a gesture to further calm the president. They became president and vice president, respectively — in an echo of the administration itself — and Sean Dollman, the campaign's chief financial officer, was brought on as treasurer, as Business Insider reported.

The campaign and its Trump Victory affiliate paid AMMC far more than it ever paid Parscale Strategy — about $617 million all told, according to FEC records. In comparison, the Trump campaign spent $690 million, total.) And while reports have suggested that AMMC was primarily a bonanza for Parscale, the spending increased dramatically after he stepped down as manager on July 15: Eight out of the campaign's top ten single-sum payments to AMMC came after that date, when Bill Stepien took over and the presidential race heated up. The campaign then reported paying AMMC more than $200 million after Parscale departed for good in late September, when police released video of his arrest on a domestic disturbance call at his south Florida home.

The campaign has paid Parscale as recently as late November, per FEC records.

AMMC also allowed Trump family members Lara Trump and Kimberly Guilfoyle, girlfriend of the president's eldest child, Don Jr., to take a regular salary but stay off the campaign's books. Previously the two women had been on the payroll at Parscale Strategy, which received regular payments from the campaign in the tens of thousands of dollars. White House sources had previously claimed that the digital mastermind paid the women each $15,000 a month, equivalent to a top White House salary; a campaign source has told Salon that number was not accurate, but would not elaborate further.

The Campaign Legal Center (CLC), a watchdog group that advocates for campaign finance transparency, alleged in a complaint filed with the FEC this summer that the Trump campaign was using AMMC to illegally evade federal reporting requirements.

While it is not unusual for campaigns to leave out some third-party vendor payments, such as a media company paying an independent videographer to do a shoot, the CLC's Brendan Fischer previously told Salon that AMMC was "a well-orchestrated scheme designed to undermine laws and transparency requirements."

"Trump took it to another level," Fischer said. "Those recipients weren't simply sub-vendors. They didn't take directions from Parscale's companies. They took directions directly from the Trump campaign. They worked for the Trump campaign, and the campaign tried to hide it."

Furthermore, Salon has reported that the campaign even hid payments to its own top officials. It has not disclosed any payments to top strategist Jason Miller, who makes $35,000 a month — effectually a $420,000 salary, or more than the presidency pays. Instead, Miller takes those payments through Jamestown Associates, a video production vendor for the campaign.

And while the campaign reports salary payments to chief of staff Stephanie Alexander and senior adviser Katrina Pierson, each of whom earn $20,000 a month, it does not appear to report paying any salary for COO Jeff DeWit or senior advisers Bob Paduchik, Bill Shine and Lara Trump, federal records show.

(Lara Trump resigned from the AMMC board in October 2019, as did John Pence, according to Trump campaign communications director Tim Murtaugh.)

A former senior campaign official previously told Salon that Kushner directed the campaign to pay Miller through Jamestown, and that the president was usually made personally aware.

Miller presents a particularly strange case: The campaign pays him through a vendor that exclusively handles video production, but Miller himself makes the calls for the campaign's media buys and placement, as well as how the campaign uses the vendor that pays him. The media placement payments are farmed out to vendors contracted through AMMC, but the campaign, for whatever reason, does not hide its payments to Jamestown — at least, not all of them.

A Trump campaign spokesperson did not reply to Salon's request for comment.