Attorney for Blackwater murder victim: Trump's pardons "a slap in the face" to U.S. justice

"The families believed in justice," lawyer says. After Trump pardoned killers, "it's been taken away from them" 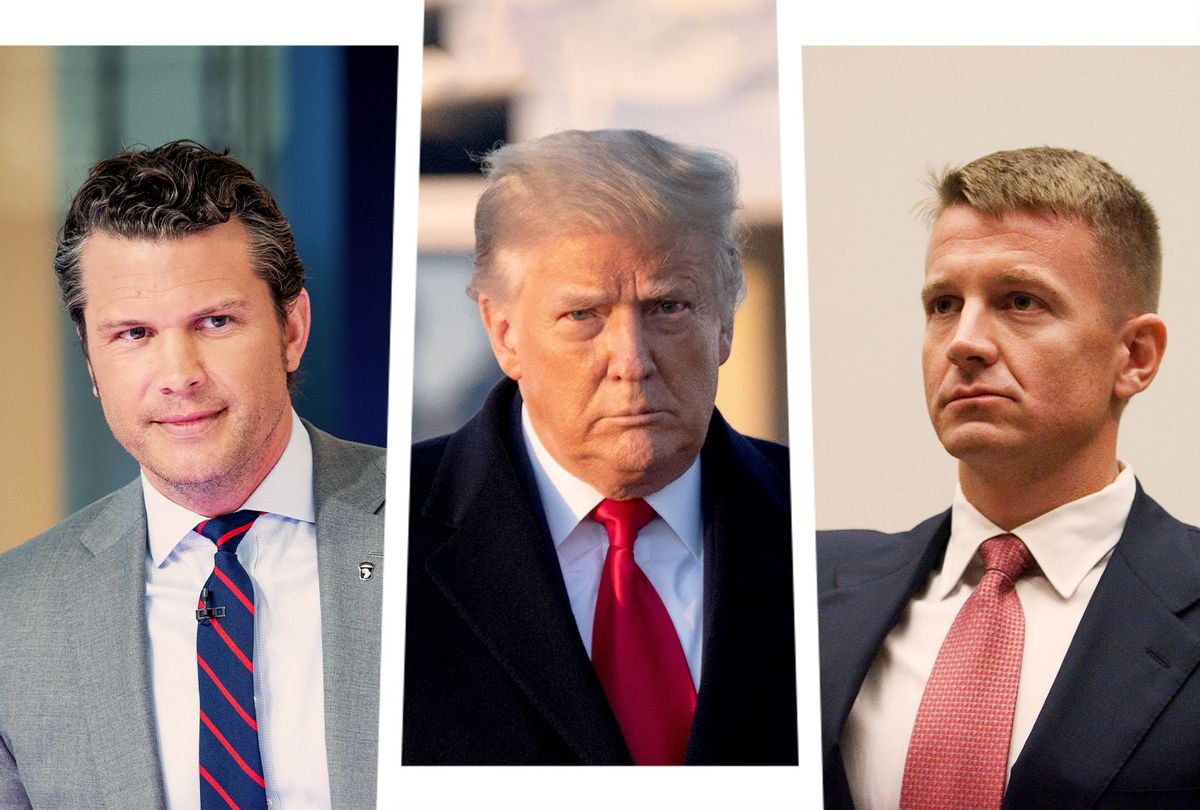 With less than a month left in his presidency, President Trump on Tuesday pardoned four Blackwater security contractors whose convictions for killing 14 unarmed Iraqi civilians in 2007 had in recent years become a right-wing rallying cry.

One of the contractors, Nicholas Slatten, was serving a life sentence for first-degree murder, and the others — Dustin Heard, Evan Liberty and Paul Slough — had each been sentenced to between 12 and 15 years for voluntary manslaughter. Their convictions came after the largest and most expensive federal investigation since the Sept. 11, 2001, terrorist attacks.

The accompanying White House statement, which came among a batch of 20, claimed that the pardons were "broadly supported by the public," citing specifically Fox News personality Pete Hegseth and a number of conservative members of the House. The statement described the 14 deaths and other injuries as "unfortunate."

The four convicted killers, all military veterans, worked for Blackwater Worldwide, a security firm founded by former Navy SEAL Erik Prince, brother of Education Secretary Betsy DeVos. The State Department had contracted with Blackwater to provide private protection for U.S. diplomats in Iraq. The company changed its name to Xe Services in 2009, and then changed it again to Academi after Prince sold the business to private investors in 2011.

"The investigation was monumental," Paul Dickinson, a plaintiff's attorney in North Carolina who represented six of the Iraqi victims in a lawsuit in U.S. civil court, told Salon. "To put it all aside because Erik Prince is one of Trump's cronies is a slap in the face to the U.S. legal system, a slap in the face to the Justice Department and the assurances it put in place to ensure these men had fair trials. And despite being the 'law and order president,' Trump has humiliated these families for obtaining justice for the crimes committed against them."

On Sept. 16, 2007, in response to reports of a nearby car bomb, a Blackwater security detail blocked off traffic in Baghdad's Nisour Square to create a safe exit path for diplomatic officials leaving a nearby meeting. However, the guards soon began firing their machine guns indiscriminately into the stopped cars, even deploying grenades, reportedly out of fear that one had matched the description of a suspicious vehicle in the area. The massacre left at least 17 Iraqis dead — all of them unarmed, including a nine-year-old child, whose brain fell to the ground at his father's feet. The official number is uncertain, however, because of the difficulties the chaotic scene presented for investigators: Some bodies could not be recovered, some evidence may have been moved or removed, and shell casings could not be definitively linked to the incident, because, as an FBI official later told The New York Times, "The city is littered with brass."

A U.S. military investigation found the shooting was unprovoked. "It was obviously excessive," a defense official told The Washington Post. "The civilians that were fired upon, they didn't have any weapons to fire back at them. And none of the [Iraqi police] or any of the local security forces fired back at them." The FBI later concurred, saying that investigators found no evidence to support the claims by Blackwater guards that Iraqi civilians had opened fire on them.

The attack sparked global backlash against U.S. efforts to contain the fallout from the Iraq War through the use of private contractors — many of them veterans — who wielded military power in war zones, but operated outside the military chain of command. The Iraqi government immediately yanked Blackwater's license the nation, and within a few years Prince had changed the company's name and then sold it, after the Blackwater name became shorthand for the perceived reckless impunity of contract mercenaries around the world. Prince later lobbied Trump to "privatize" the war in Afghanistan by replacing U.S. troops with mercenaries, citing the notorious East India Company as a model.

"Prince made millions by sending these men back to Iraq, but Blackwater made it harder for the soldiers to do their job," Dickinson told Salon. "The sad fact is that they didn't follow rules of engagement. They drove around in tan-colored Army vehicles without markings, and most Iraqi citizens didn't know the difference until it was too late. Blackwater convoys that ran through town, shooting indiscriminately, made it more difficult for soldiers trying to do the right thing the right way."

The U.S. refused to allow the four men to be tried in Iraq, and on Dec. 31, 2009, a federal judge dismissed charges against them in the U.S., citing inappropriately handled evidence. At the time, then-Vice President Joe Biden, who had recently taken office, told the Iraqi government that the Obama administration would continue with the prosecution.

"A dismissal is not an acquittal," Biden said.

Over the next decade, as the complicated criminal and civil cases made their way through the justice system, the Blackwater guards became known as the "Biden Four" in right-wing circles.

Prince captured the criticism of that process in his debate with Hasan, claiming falsely that the men were prosecuted four times, which would have violated of basic constitutional rights. "The federal government finally got them in a D.C. jury on the fourth time they tried it," Prince said. Hasan asked if Prince was saying that a Washington, D.C., jury is not legitimate. Prince responded: "A jury of your peers — it does not really compare to the rest of America. No."

Dickinson, the attorney who represented some of the victims, including the family of the nine-year-old, Ali Kinani, told Salon that the criticism gets it backwards: The trial ran long precisely because it was fair.

"It misses the point that somehow there were multiple attempts to convict. The point is that the trials went through, the system worked," Dickinson said. "The case went through the full appellate process. It needed to be fair, and they were given fair trials and fair convictions."

The men were not tried four times. After the 2009 dismissal, the government appealed, and in 2011 the D.C. Court of Appeals reinstated the charges, a ruling which the Supreme Court declined to review. The case went to trial, and in 2014 a jury convicted Slatten, who had fired first, of first-degree murder; the other three men were convicted of voluntary manslaughter. Slatten appealed the verdict, and three years later, the D.C. Court of Appeals overturned his conviction, ruling that his case should be tried separately. The court also ordered new sentences for his associates, ruling that their 30-year terms qualified as "cruel and unusual punishment."

Slatten, who has maintained his innocence, declined to accept a plea deal on manslaughter charges, and in his 2018 retrial was once again convicted of first-degree murder. The next year, a federal judge sentenced him to life, and sentenced his associates to between 12 and 15 years.

President Trump has intervened in similar military crimes before, such as pardoning Army Lt. Clint Lorance, who was convicted of second-degree murder charges in the deaths of two Afghans, and Navy SEAL Eddie Gallagher — described as "freakin' evil" by members of his own unit — who and was convicted of war crimes in July 2019 after posing in pictures with the body of a teenage prisoner he had killed with a hunting knife.

Dickinson lamented the effect that Trump's actions would have on allies, and on the way the world views the U.S. justice system.

"Mohammed Kanani had greeted the U.S. soldiers in Baghdad. He welcomed the changes that were happening in his country, to get out from under Saddam Hussein's oppressive and vindictive government," Dickinson said, referencing the father of the nine-year-old killed in the Blackwater attack.

"During the trials, the families relied on us to explain this complicated process. It was difficult for them to understand all the setbacks, but they believed us and relied on that," he said. "Many of them through great effort were brought to the U.S. to testify in the criminal trial. They sat in the stand, in the courtroom, believing in the system, believing in the justice that we told them they had a right to. Now it's been taken away from them, and there is no further option. I know for a fact that they are extremely distraught over this news back in Iraq, where they still reside."

Kinani expressed his anger in an interview with ABC News on Wednesday, saying, "I don't know what I did to Blackwater."

"The president of the United States, he is above the law," Kinani told ABC. "These are people who should stay in jail. I feel lost today. I feel as if something is up[side] down. I just remember every detail about what happened. It's really hard to live with this ... and this really broke my heart."

In a January 2019 Fox News opinion column, then-Rep. Duncan Hunter, R-Calif., described the "Biden Four" as "political pawns who now sit in jail. ... The fact remains, these brave men were sent to prison for doing their jobs."

A year later, Hunter resigned from Congress after pleading guilty to misuse of campaign funds, including expenses for multiple extramarital affairs. He was slated to begin an 11-month prison sentence, until he was also pardoned by Trump on Tuesday.