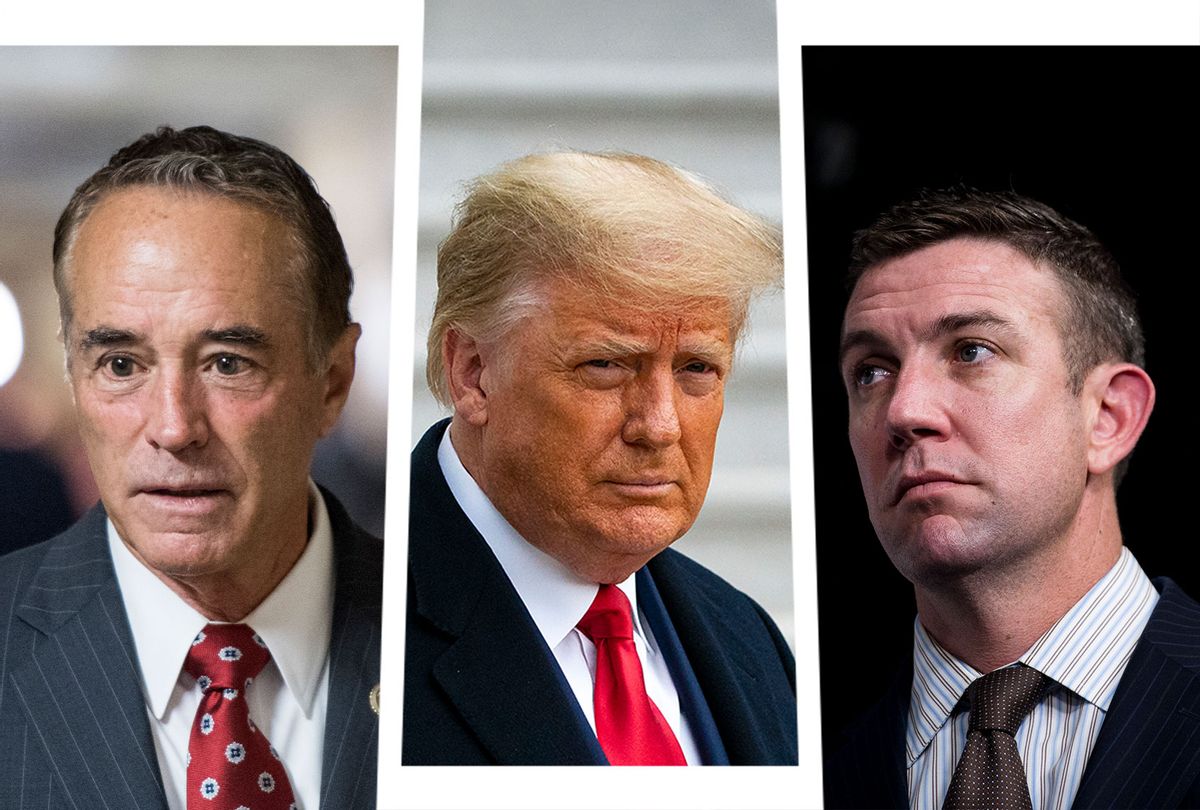 President Donald Trump on Tuesday granted clemency to 20 people, including corrupt former Republican lawmakers and convicted killers, as his administration rushes to kill more than a dozen people since recently ending a 17-year moratorium on federal executions.

Trump granted 15 pardons and five commutations, the White House said in a statement, including three former Republican congressmen, two targets of special counsel Bob Mueller's Russia investigation, four Blackwater guards convicted in the slaughter of 14 unarmed Iraqi civilians, and two former Border Patrol agents who shot an unarmed border crosser. In many cases, the pardons and commutations "bypassed the traditional Justice Department review process" and "more than half of the cases did not meet the department's standards for consideration," The New York Times reported.

Hunter was scheduled to begin serving an 11-month prison stint after pleading guilty last year to misusing campaign funds. Prosecutors said that Hunter, one of Trump's earliest supporters in Congress, spent more than $200,000 on personal expenses like lavish vacations, theater tickets, and even to facilitate multiple extramarital affairs. Hunter won his 2018 re-election bid despite the charges but ultimately resigned.

Collins, another of Trump's earliest congressional backers, was serving a 26-month sentence after he pleaded guilty last year to lying to the FBI and conspiring to commit securities fraud. Collins was infamously photographed appearing to commit insider trading while attending a White House event.

Stockman was sentenced to 10 years in prison in 2018 after he was convicted of 23 counts of fraud and money laundering. Prosecutors said Stockman stole hundreds of thousands intended for charity to pay for personal expenses and his political campaigns. Stockman's pardon was urged by former Trump attorney Sidney Powell, who has pushed a bizarre conspiracy theory claiming a Venezuelan voting machine plot to switch votes from Trump to President-elect Joe Biden, according to The Times.

"It is a good night to be a corrupt Republican congressman," CNN host John Berman said while announcing the news on Tuesday.

Trump also granted a pardon to George Papadopoulos, who served 12 days in jail after pleading guilty to lying to the FBI about his contacts with Russian intermediaries in Mueller's investigation. He later wrote a book alleging to be a victim of a "deep state" plot to "bring down" Trump. Papadopoulos infamously revealed to an Australian diplomat that he learned that Russia had dirt on former Secretary of State Hillary Clinton while drinking at a bar. Trump also pardoned Alex van der Zwaan, a Dutch lawyer who was convicted in Mueller's probe of lying to investigators about his contacts with a business associate believed to be a Russian intelligence officer who worked closely with former Trump campaign chief Paul Manafort.

Trump's list of pardons also included four former Blackwater contractors convicted in the 2007 slaughter of 14 unarmed Iraqi civilians, including two young boys, in Nisour Square in Baghdad. The shooting also left 17 others wounded. One of the contractors, Nicholas Slatten, had been sentenced to life in prison after the Justice Department went to "great lengths to prosecute him," the Times noted. Slatten, along with Paul Slough and Evan Liberty, who were sentenced to 15 years, and Dustin Heard, who was sentenced to 12 years, were convicted in 2014 after prosecutors said they used "powerful sniper fire, machine guns and grenade launchers on innocent men, women and children." Some of the people were "shot inside of civilian vehicles while attempting to flee," prosecutors said.

Blackwater founder Erik Prince, the brother of Education Secretary Betsy DeVos, is a longtime Trump backer who has been involved in multiple right-wing schemes and drew scrutiny in Mueller's investigation. Fox News host Pete Hegseth and Hunter both lobbied for the pardons, according to The Times.

Trump also granted pardons to two former Border Patrol agents who already had their sentences commuted by President George W. Bush after they were convicted in 2006 of shooting an unarmed border crosser accused of drug smuggling as he tried to flee and covering it up.

Trump previously pardoned former national security adviser Michael Flynn, who twice pleaded guilty to lying to the FBI about his contacts with a Russian official before attempting to reverse his plea, and commuted the sentence of longtime adviser Roger Stone, who was convicted of numerous federal charges in Mueller's investigation.

Trump granted 45 pardons or commutations before Tuesday, 88% of which went to people with personal ties to the president or people who advanced his political goals, Harvard Law professor Jack Goldsmith told the Times.

The pardons "continue Trump's unprecedented pattern of issuing self-serving pardons and commutations that advance his personal interests, reward friends, seek retribution against enemies, or gratify political constituencies," he said. "Like his past pardons, most if not all of them appear to be based on insider recommendations rather than normal Justice Department vetting process."

Trump is expected to issue more pardons before his term expires, according to the Associated Press. His allies have discussed pardons for his family members and attorney Rudy Giuliani, who is under investigation by federal prosecutors in New York while leading Trump's failed legal effort to overturn the election.

While Trump is handing out pardons to allies, there are 14,000 people in line for pardons and commutations who have waited for years, according to The Washington Post. Trump has granted far fewer acts of clemency than former President Barack Obama and Bush. Of the 20 people who received clemency on Tuesday, only seven had active petitions to the Justice Department.